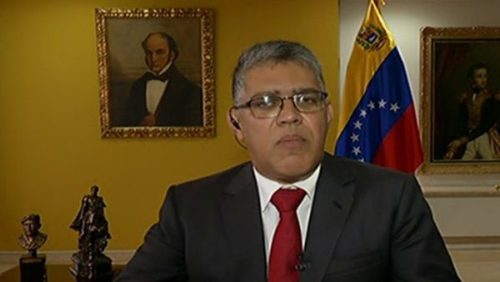 From El Salvador, where the meeting of Chancellors of the Community of Latin American and Caribbean States (CELAC) is being held, the Minister of Education and leader of the Presidential Commission of the Constituent National Assembly affirmed that one of his goals is to restore the principle of cooperation of the powers, because that’s the only way to preserve peace in the country given the opposition’s lack of will to dialogue.

“It will open a window of peace in this context where the Venezuelan counter-revolution, in cooperation with the US, has been mudding the water to promote the outbreak of a civil war in the country, which is the same strategy that has been applied in Libya and Syria,’ Jaua said in an interview with TeleSUR.

He remarked that the government has been trying to block attempts to install a civil war by beginning a democratic and revolutionary process by which the President of the Republic puts power in the hands of the people. ‘Let the people decide on the model of country we want to build, on the organization of the state and on the broadening and perfecting of our Constitution, which we approved in 1999.’

The first task on the list of the Constituent National Assembly’s Presidential Commission is to set meetings with representatives of society.

The calling will be extended to the ‘Motherland’ Bloc and to the Opposition Bloc in the Parliament, as well as principals of public and private universities, constituents who wrote the 1999 Constitution, indigenous associations, chiefs of all indigenous communities, legalized union confederations, corporation unions, owners of media outlets, the national communal bloc, the peoples’ government in territories and sectors of the national students’ movement.

The MUD’s reaction to the proposal

The opposition coalition Democratic Unity Roundtable (MUD) called Venezuelans to ‘rebel against the Constituent process’, to protest every day on the streets against what they consider ‘a dissolution of democracy and of the Republic’.

They also call the voting mechanism ‘fraudulent’ because the people will choose 500 representatives, who will vote on the final version of the text.

The Constituent National Assembly: the only option for peace

Regarding the reactions of the Venezuelan opposition, Jaua pointed out that all they do is confirm the diagnostic that led President Maduro to call to this Constituent assembly, which is a situation of scarce possibilities for dialogue, even with the support of Pope Francis. ‘There’s no other way to preserve peace in the country to call to a national Constituent dialogue in all areas of the country, considering that the leadership of the MUD in Venezuela has chosen the way of violence—they have abandoned the way of politics and chosen armed, terrorist actions. They have abandoned the way of democracy.’

Jaua called all supporters of peace to join the debate and bring reason to it, since the reasons the opposition has expressed to resist the process ‘are absolutely baseless. The Constituent will be voted on through universal, secret and direct vote, in sectorial and territorial districts’.

‘What they have said about it being a mechanism designed by the President, Nicolás Maduro, is completely false and what we ask is that they come and listen to the proposal, the goal, the programmatic lines and the ideas we have on the creation of the voting structure that will be used to choose the constituents,’ the Minister explained.

Lastly, he emphasized that one of the goals of the Constituent assembly is to restitute the principle of cooperation between powers. This cooperation has been broken since the National Assembly, led by the opposition, was declared in contempt for violating legal procedures and trying to destitute the President. The Supreme Justice Court had to intervene to block a coup attempt.

Jaua remarked that there are governors that are in contempt against the National State, like the governor of the state of Miranda, Henrique Capriles, who has been defying public security organisms.

‘Let’s imagine for a moment what it would look like if the US governor of Florida went to Washington with his police force to try to enter the White House by means of force. We also have a National Assembly that is disobeying the sentence of the Supreme Justice Court, in confrontation with the Ombudsman. Without a doubt, right now, conditions aren’t normalized enough from the institutional point of view for us to be able to say that we can go to an electoral process that’s acknowledged by both parts,’ Jaua concluded.