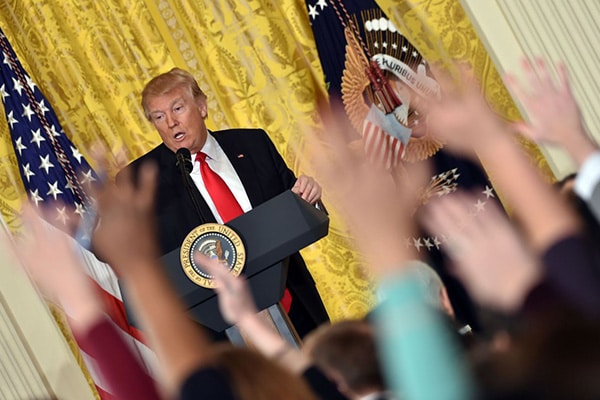 In this article Paul Street builds on the argument developed by John Bellamy Foster in the April 2017 Review of the Month, taking the media to task for promulgating the myth of Trump’s “populist” support. Look out for Foster’s piece in the upcoming Review of the Month for June 2017, where he addresses the very same topic in greater detail. [wc_highlight color=”red” class=”editors-note”]—Eds.[/wc_highlight]

I imagine I’m not the only political and media observer sickened by the dominant (“mainstream”) corporate media’s habitual reference to xenophobic, right-wing, white-nationalist, and neo-fascist politicians like Donald Trump, Geert Wilders, Nigel Farage, and Marine Le Pen as “populists.” Populism properly understood is about popular and democratic opposition to the rule of the money power—to the reign of concentrated wealth. It emerged from radical farmers’ fight for social and economic justice and democracy against the plutocracy of the nation’s Robber Baron capitalists during the late 19th century. It was a movement of the left. As the left author and journalist Harvey Wasserman notes:

“The Morgans, Rockefellers and their ilk had captured the industrial revolution that dominated the U.S. after the Civil War. The farmers of the South and West fought back with a grass-roots social movement…They formed the People’s Party. Its socialistic platforms demanded public ownership of the major financial institutions, including banks, railways, power utilities and other private monopolies that were crushing the public well-being.”

“At their national conventions in Omaha in 1892, and St. Louis in 1896, and elsewhere, they demanded an end to corporate and foreign ownership of land. They wanted a national currency based on food rather than gold and silver. They endorsed universal affordable medical care, free public education and a general guarantee of the basics of life for all humans. They demanded equal rights for women, including the vote…They also preached racial unity, especially among black and white farmers in the South, and between native and immigrant workers in the cities.”

Contemporary populists worthy of the label are leftists. They back “human rights, social democracy, peace and ecological sanity” (Wasserman). They support racial and ethnic equality and unity in the interest of working class solidarity and struggle from the bottom up. They want government to serve the broad working class majority of the populace and the common good, not the wealthy corporate and financial Few.

The dominant media sometimes has the decency to distinguish between the “left populism” (democratic socialism) of an Evo Morales (Bolivia’s Indigeneous and ecosocialist president), a Jean-Luc Melenchon (the ecosocialist French presidential candidate) or a Jeremy Corbin (the left leader of the British Labor Party) on one hand and the “right wing populism” of a Trump, Le Pen, Wilders, or Steve Bannon on the other hand. But the makers of this distinction fails to understand that “‘Populists of the Right’ are fascists. Their goal,” Wasserman writes, “has a clear definition, as put forward by the term’s originator, Benito Mussolini: ‘Corporate control of the state.’” Further:

“When they take power, they become National Socialists, using the government to enrich the corporations and the rich, rather than Democratic Socialists, or social democrats, using the state to serve the people. Fascists support enriching the rich and to hell with the rest of us. They are racist, misogynist, anti-ecological, militaristic and authoritarian. They hate democracy, freedom of speech and an open media. They take power by fomenting hate and division. Le Pen, now in in the runoff for the leadership of France, is a classic fascist…”

Trump is no populist. His tax plan released last Wednesday by Goldman Sachs veterans and White House officials Gary Cohn and Steven Mnuchin would slash tax rates for businesses from (a seldom paid) 35 percent to 15 percent. The Trump scheme includes a “pass-through” tax cut on business income that is currently taxed at the business owners’ individual income tax rates rather than the corporate rate.

Calling Trump’s proposal as “a very big step in precisely the wrong direction,” the Economic Policy Institute’s Josh Bivens and Hunter Blair say that the pass-through tax cut “will help private equity managers and people like President Trump: wealthy people who will now be able to reconfigure their taxes by reclassifying themselves as independent contractors.”

Another regressive part of Trump’s plan would liquidate the alternative minimum tax, which is meant to stop the super-rich from using loopholes to escape all tax liability. Trump would deepen inequality further by repealing the estate tax on wealth transferred from deceased people to their heirs.

How journalists can continue to call the billionaire and billionaires’ President Trump a “populist” in light of such oligarchic policy initiatives is an interesting question.

Of course, Trump is something worse than just a non-populist. He’s a neofascist who hopes to rally white “heartland” working class support for his fake-populist plutocratic agenda with a toxic brew of hyper-militarism, immigrant-bashing nativism, law-and-order racism, sexism, and anti-intellectualism. Like Hilter in the early middle 1930s, Trump hopes to use the scapegoating of demonized others and foreigners—Muslims, Mexican immigrants, “China,” and other targets (Canadian timber exporters!) —to divert popular attention away from his service to the rich and powerful.

Sometimes mainstream journalists make no effort to distinguish between “populism’s” right and left variants. In a recent reflection titled “Western Populism May Be Entering an Awkward Adolescence,” New York Times reporters Max Fisher and Amanda Taub delete the left version altogether. Fisher and Taub matter-of-factly proclaim that “a wave of recent elections seemed to offer contradictory evidence as to whether populism is advancing or receding. It triumphed in the British vote to leave the European Union [the ‘Brexit’ vote} and in the American presidential race [Trump’s victory],, fell short in the Dutch elections [Dutch nationalist Geert Wilders’ defeat] and won its greatest-ever success in France’s first presidential round [Le Pen’s 21%]…”

Never mind that all the politicians and parties Fisher and Taub call “populists” are in reality neofascists. They combine loyalty to an ugly and authoritarian model of capitalism with white nationalism, immigrant-bashing, racism, sexism, and an appeal to “traditional values.”

Meanwhile the mainstream media writes off politicians closer to real populism—left leaders like Corbin and Melenchon—as “the extreme left.”

It’s too much, I suppose, to expect the U.S. corporate media to acknowledge that a neofascist sits in the White House as the representative of one of the nation’s leading two capitalist parties. One might at least hope they could use the F word (fascism) to describe the quite more openly fascistic white-nationalist militia groups that have seen chilling membership gains under Obama and Trump. So far, those groups too have avoided accurate description as fascist by “mainstream” U.S. news authorities (see this from “P”BS, for example)—a disturbing fact. It does not bode well.