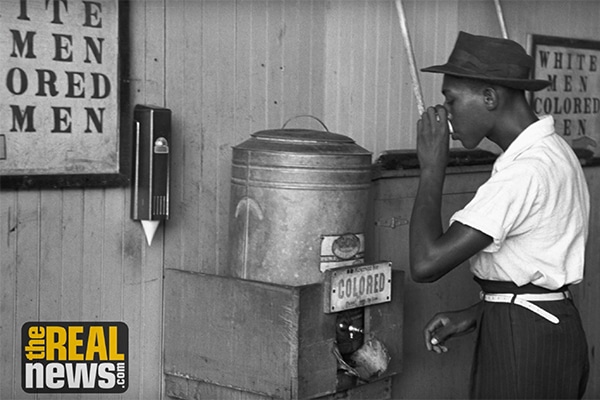 PAUL JAY: [I]f Trump reverses much of the—I would say modest reforms [with respect to climate change,  is the 2050 2-degree threshold] still meaningful? In other words, are we really going to cross this very dangerous threshold, perhaps by 2040, 2035?

What does…[the] Trump climate policy…mean for us—us as a species? And…why is climate change not at the very top of people’s political agenda?

GERALD HORNE: Well, first of all, those who are paying attention to U.S. politics should not be surprised by the fact that magical thinking is the dominant characteristic. Particularly when one considers that a billionaire conman was elected, supposedly to protect the interests of a certain sector of the working class.

If you look at other kinds of polling data, you may not be shocked to ascertain that many Republican voters feel that those who are defined as white actually face more discrimination than black Americans, who were the descendants of enslaved Africans. This should point us to the reality that those who deny climate science are not necessarily in a category where they’re accepting other kinds of realistic predictions and prognostications.

I think that if you look at the history of the United States, what you’ll come to see rather quickly is that in order for the United States to move away from both slavery and Jim Crow, it is extraordinary global pressure. Likewise, if the United States is going to adhere to climate science, we may want to take seriously the proposal that has been floating around for some years now, that a tariff be placed on certain U.S. exports, with the funds being poured into a climate fund, that will be devoted to the interests of so-called climate refugees, that is to say, those who flee from Africa, or Asia, or Latin America because of the deleterious impact of global warming, or that that fund be devoted to certain kinds of technologies which can rescue the planet from the disaster that the Trump coalition is promising for us all.

Admittedly, this is not necessarily a realistic prediction or reform, given the global correlation of forces with Washington keeping its thumb on the scale, but certainly we need to start thinking along those lines, if we are going to rescue humanity.

To read the full transcript of this interview visit The Real News Network.

Dr. Gerald Horne holds the John J. and Rebecca Moores Chair of History and African American Studies at the University of Houston. His research has addressed issues of racism in a variety of relations involving labor, politics, civil rights, international relations and war. Dr. Horne has also written extensively about the film industry. His latest book is The Counter-Revolution of 1776: Slave Resistance and the Origins of the United States of America. Dr. Horne received his Ph.D. in history from Columbia University and his J.D. from the University of California, Berkeley and his B.A. from Princeton University.