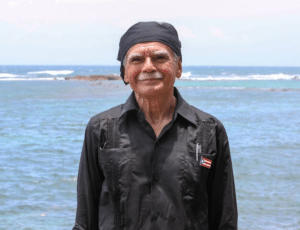 While many of us could hardly concentrate on everyday matters as we thought obsessively about the fragile and unfortunate fate of Oscar López Rivera, the former political prisoner painted peacefully in the prison in Terre Haute Indiana.

Then on January 17, at 3:30 pm a guard called him to let him know that he had a call from his lawyer Jan Susler who gave him the news. “Oscar, President Obama just commuted your sentence”. Lopez Rivera stayed quiet. “How do you feel, Oscar?  Aren’t you happy?” “I feel the same as yesterday, the same as always,” he replied.

They were too many years preparing emotionally for the worst-case scenario. That perhaps explains why he did not immediately feel elated with the news of his physical release.

Meanwhile, in Puerto Rico, we were learning little by little and by different means.  There were collective cries, sent hugs, and thousands of text messages – social network was emotionally passing the news. That night celebrations where everywhere. The pleneros gathered in several places in different parts of the city and friends got together to celebrate. Meanwhile Oscar López remained peaceful. Perhaps he did not believe it was true.

He actually internalized the news the day that they opened the gates of the prison and he walked out. The first thing that surprised Oscar upon his release was the tremendous physical space that opened up before him. “On the 9th of February, I’m in a prison waiting room and they told me “They’ve arrived”. Clarisa is the first one who comes out of the car and we met but for me the first thing was the issue of space, because when one is in prison all your space is limited,  then at the moment when one begins to see space without any limitation, that  is truly something else, a liberating feeling. They are talking, I am listening to them but now there are no gates, no intervening walls, now there is nothing”.

When he arrived in the huge Indianapolis Airport, Oscar was surprised again with the extreme casualness in that place. “But now he was accompanied by people, almost no one is talking but everyone texting. It is something quite different. I’m not used to this”.

On his first night in San Juan he was greeted by a chorus of coquíes santurcinos, followed at dawn by the sound of roosters. “They were beautiful initial experiences, the next day I woke up very early, around at 4:15 and I started to look at the sky, the air was a little cold, I looked up at the stars, and again because they are very nice experiences, I could hear the coquies, I heard roosters, it had been 35 years since I had heard a rooster.”

One of the things that most impressed him from the first day was the gentrification going on in the popular neighborhoods of Santurce. “When I was clandestine I lived for four months between the San Jorge and the Loiza. When I arrived I didn’t recognize it. When they gave me permission to run I saw the ‘gentrification’. One who has not experienced gentrification does not know how harmful that may be to the Puerto Rican people. The first community in the United States to be gentrified was a Puerto Rican community in Chicago, Lincoln Park. Luis Gutiérrez was born and raised there and the Rodriguez sisters until 1969 “.

The Puerto Rico that received Oscar López Rivera, after a fight that often seemed impossible, is possibly the most difficult Puerto Rico in modern times. But Oscar says that he is a man who likes to see the good side of things and responded quickly that the Puerto Rican crisis has positive elements. “The issue of decolonization is much clearer than ten years ago”.

And about the Junta, “that was coming”, he says and started telling an eloquent story, he had obviously studied well, about how this outcome had been shaping since the 1970s.

“In 1971, the billionaires in the United States decided to take the reins of power in a different way,” said Oscar. “They felt there was too much democracy.” It was the era of David Rockefeller. They created the think tanks which in turn would create strategies to project 20 years into the future. (President) Reagan deregulates banking and the hedge funds and financial usurer’s processes were born. The payday loans begin and at the same time processes of globalization such as NAFTA. Arguably, it is neo-liberalism in all its glory. Before, families could live on a single salary. From 1976 onwards, with the economic situation the entire family had to work, spouses and children included. The trade unions are dismantled. The Right to Work Laws eliminated or dramatically minimized the trade unions.  On the other hand crime begins to increase and the phenomenon of the life in the ghetto takes shape. Long ago I learned to ‘follow the money’. I have always followed the money. Apartments for sale for two million dollars, that is not for Puerto Ricans. All this has been planned. It is not a coincidence”.

For Oscar it was always obvious that in Puerto Rico, “being in a colony, the conditions will always be the worst.” Under Rosselló things began to privatize,” he recalls. The Koch Brothers, a club of millionaires, sought to form the power with very conservative municipal and state legislatures. They did it all over the United States. With this phenomenon begins the possibility that a Trump could come to power. They started early and everything was carefully calculated. Now we have a President whose public policy is racism.  Trump and the racism in the US illustrate just how sophisticated was the work that they did.”

If nothing is done, the fate of Puerto Rico will be the same as that of the Indian reservations in the United States, says López Rivera. He has been out for just a little bit but already has noticed the proliferation of foreigners everywhere, especially in towns like San Juan, Isabela, Rincon, etc. “Or an Indian reservation or a Hawaii, an Alaska…”.

However, he insists, there are movements to prevent it.

“It is a time of great challenges that can be leveraged. Seeing the enthusiasm to fight on May First was very positive. There is an energy for the struggle.  I believe there is a common denominator for this which is the decolonization of Puerto Rico. We need to set up a large tent where all of those who love this country can fit into it”.

He admits that much of his enthusiasm comes, of course, from the student struggle. “Very excited about the fight of those students”, he says. “The students are the future of the homeland.”

Oscar pointed out how the student struggle today resonates with him and reminds him of the desperate and repressive scenario of the seventies, when he struggled in Chicago, as well as certain challenges to the legality of the way some groups struggle. It is different and less organized than then…he remains thoughtful a few seconds.

“Fighting cannot be a futile exercise. When one is young, like fire, mistakes can be made and the results can be painful. Sometimes experience is needed. When we went to prison, they tied us up, they took us out of circulation and tried to break us in prison so that when we did get out we would be weakened. The fight has to be done with care. It Depends on how well prepared we are at that moment. When I see (Hector) Pesquera it worries me a lot. His position here as Puerto Rico’s police chief is not accidental. He has access to all sorts of agent provocateurs. “He can pull from a whole agency (FBI) with all its corruption, killings, jailings and repressing people”.

What the figure of Oscar López in Puerto Rico achieves has been overwhelming. Everyone agrees that there has not been a cause as unifying as his release probably since Vieques. Its political capital is immense. He is probably one of the people most admired and respected in the country. What he is going to do with that, we ask. Where will you put the capital of resistance, courage and dignity?

Our former political prisoner answers, and at the end of the interview, off the record, reiterated it again, almost in a whisper, almost just in case: “The only thing I know is to fight.” My commitment does not stop until my last breath has been taken”.