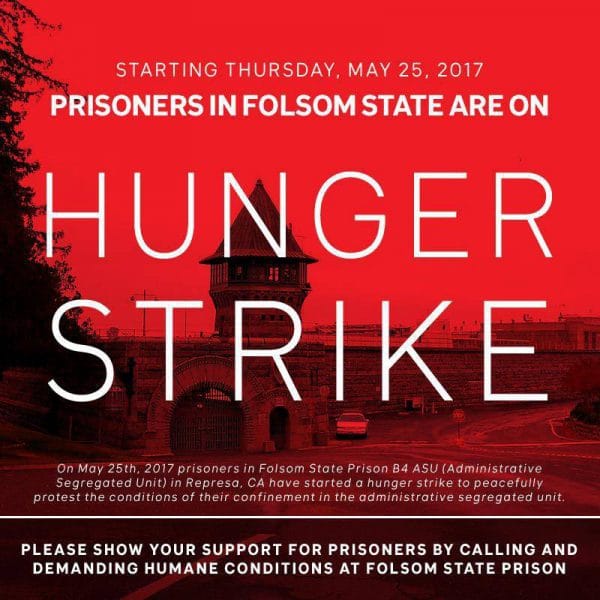 Samidoun Palestinian Prisoner Solidarity Network expresses our solidarity with the hunger strike taking place in the Folsom State Prison B4 Administrative Segregation Unit (ASU) in California in the United States.

Isolated prisoners launched their strike on 25 May to protest the inhumane conditions in which they are held in solitary confinement. The prison administration has refused to address their just and legitimate demands and has instead responded with increased repression.

The Prisoner Hunger Strike Solidarity Coalition reported that “we cannot say exactly how many people are refusing meals, but we know that there are roughly 30 people in the unit that announced the strike.”

Samidoun expresses its strongest support for the strikers and their demands, and for the struggle in the United States against racist oppression and mass incarceration. We salute those fighting for their lives and human dignity in a prison system based on racism, injustice and exploitation.

The strikers’ demands in Folsom include adequate access to courts, legal assistance, education, rehabilitation, televisions, and appropriate recreation equipment, an end to noisy “welfare checks,” properly packaged food and toiletries at the commissary (prison store), and appropriate clothing and food bowls and cups.

The strikers declared in the announcement of their strike:

“[M]en stand again, just as unified, ready to sacrifice their bodies, health, and life to achieve what has already been hard fought for and accomplished. Why must California prisoners continue to sacrifice health and life, involve lawyers and courts, in order to be treated like human beings? We will continue to remind CDCR officials they will be held accountable for this type of treatment.”

Prisoners in B4 ASU are forced to sit or stand idle in their cells or yard cages without meaningful exercise, education, or rehabilitative programs. We are already forced to endure atypical and significant hardships due to being in segregated housing and solitary confinement. When taken together, these conditions constitute cruel and unusual punishment under the U.S. Constitution.

“We are being deprived of basic human needs, including normal human contact, environmental and sensory stimulation, mental and physical health, entertainment, physical exercise, sleep, access to courts, and meaningful activity. Prolonged exposure to these deprivations has caused and will cause serious physical and psychological harm.”

Take action to support the prisoners, with the following actions called for by the Prisoner Hunger Strike Solidarity Coalition, working together with the strikers in Folsom:

Sent to a secretary or voicemail? Leave a message for the official you are trying to contact.

First time calling in? You can find a detailed guide here.

“Hello, my name is ____________and I’m a resident of _______(name your state). I am calling in support of the hunger strike that began May 25th at Folsom State Prison. I am deeply concerned about the cruel and inhumane conditions of confinement that have brought this on. I strongly urge you to meet the Hunger Strikers’ reasonable human rights demands, and do not retaliate against them.”