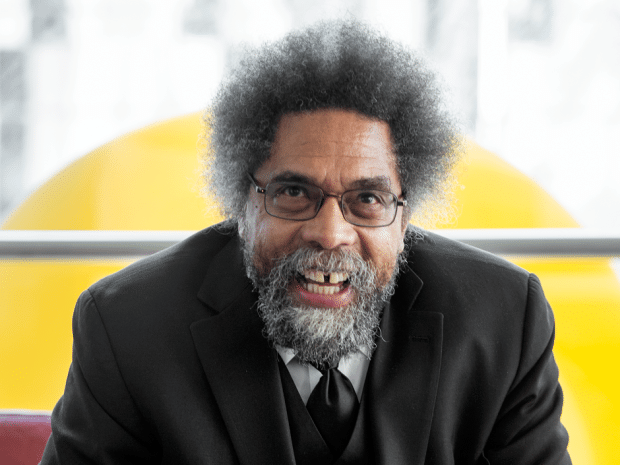 cornel west : american philosopher, activist, professor, jazzman ‘in the life of the mind’

To illustrate his point about soul in civil society during these “times of spiritual blackout,” in a lecture this week at Toronto’s Ryerson University, the American philosopher and activist Cornel West briefly walked away from the lectern, saying the audience would understand better by just listening to John Coltrane’s 1965 masterpiece of praise, A Love Supreme.

It was a joke. His silence did not last. It rarely does. Seconds later, he was back in the full swing of a fever-pitched sermon, mainly about America, but with relevance to Canada, as a nation trying to reconcile historic sins with modern pride.

“I come from the American empire,” he intoned to the annual Congress of the Humanities and Social Sciences. “We have much to learn.”

West illustrates himself more than most academics, almost to the point of caricature. From the gap in his teeth and his wild hair to his scattershot speaking style with the air of a revivalist preacher, he is so distinctive that he gets parodied on Saturday Night Live’s Weekend Update, and even acted in The Matrix movie franchise.

He is also a career public intellectual, a role Americans tend to pull off better than Canadians, who as a rule are embarrassed by professors who get airs above their station, such as Michael Ignatieff.

But West is a star, both in pop culture and in academia, where he has bounced around the Ivy League, landing back recently in Cambridge, Mass. — whence he fled in a high profile spat with former Harvard president Lawrence Summers in 2002, partly over West’s side projects in rap music and politics — to take a joint appointment at the Harvard Divinity School and the Department of African and African-American studies as a professor of the practice of public philosophy.

Earlier, in an interview that began with a hug, he spoke of the dangerous tendency to see U.S. President Donald Trump as exceptional, an outlier or an aberration, when in fact he is a classic American “gangster,” every bit as much as, for example, the pioneering civil rights leader Malcolm X before his spiritual awakening.

The correct response to Trump’s “neo-fascism in the making” is not wonderment, West said, but “charitable Christian hatred,” a spiritual orientation to injustice that emphasizes sin and personal responsibility, but also the endless possibility of redemption.

It was curious that a crowd of students and scholars who, in almost any other context would denounce Christianity’s influence on civil society, were instead cheering it.

“Can you deal with the Trump elements inside of you?” West challenged his audience, as the cheers morphed into a bemused “Hmmmm.”

“The last thing we want to do is fetishize Donald Trump, as if he’s fallen from the heavens, and that somehow if you get rid of Trump, you’ve really come to terms with the right wing populism, the atavistic nationalism,” he said in the interview. “No, Trump is an expression of the worst of American culture and American empire. He expressed something very deep in the culture.”

The Alt-Right, for example, a term he mocked as a journalist’s cliché, is “continuous” with the old right, he said. George Wallace got nearly 15 per cent of the presidential vote in 1968 as a segregationist. Richard Nixon used white supremacist “dog whistles,” he said. George H.W. Bush did the same by fixating on the black murderer Willie Horton. Ronald Reagan went to Philadelphia, Mississippi, in 1980, where the Ku Klux Klan had killed three civil rights activists. He called for “states rights,” and was endorsed by the Klan the next day.

The arts and humanities have a key role to play in the response to injustice, he said, by offering “exemplars” as much as ideas. But they often get distracted by their own petty squabbles and obsessions. His imitation of a polite, simpering, white academic, using words like “diversity” and “text,” drew especially raucous laughter.

“We don’t need sunshine soldiers in this moment, we need all-season lovers, long-distance runners for freedom,” he said.

Part of the problem, he said, is the modern preference for writing over reading, and talking over listening. He scornfully referred to the boom in first-person confessional writing, driven by social media, as “neo-liberal soulcraft.” He means it is empty, sanitized, tone-deaf, disconnected from the past and the culture. The attention span has contracted, and the only solution, as he sees it, is basically to shut up and listen, stop typing and read, and thereby “cultivate the faculty of receptivity.”

“This is why I’m a jazz man in the life of the mind. You can blow your horn if you want to, but you’re still answerable, and accountable, to other folk in the band, and the audience who is listening. So you can blow all you want, but if you’re just playing scales, and not hitting any serious notes that can affect your soul, you have to be told,” he said.

In his lecture, however, he also used this same term, “soulcraft,” in a positive sense, to describe how the humanities can alter perspectives, and bring about the “return of the repressed funk,” which he pointed to in Coltrane’s music, James Baldwin’s writing, and Aretha Franklin’s singing. He took it a bit far, even making the point that we were all literally “born between urine and feces,” and must seek, in a metaphorical sense, to return.

Can you deal with the Trump elements inside of you?

Politics, in West’s view, relates to the care of the soul as much as to public finances or foreign policy. He made this point in reference to colonialism in Canada, echoing the view of some First Nation activists that it hurt everyone, not just indigenous people. It robbed Canadians of the chance to live in a just country and “…not just a just country, but the quality of your souls, the quality of who you are as a human being. Who wants security predicated on dispossession of lands and subordination of a people? That’s not a spiritually mature form of security,” West said.

This is where his “charitable Christian hatred” comes in, as a spiritually motivated intellectual refusal to “normalize the subhuman treatment of a person.” He said it also inspires his support for the Boycott/Divestment/Sanctions movement against Israel, which has been difficult to pursue while avoiding “any anti-Jewish pitfalls.”

This moral problem is much the same in America, he said. “How do you hate white supremacy and still not hate white people? That’s a very slippery tightrope, but it has to be walked.”

“It is a revolutionary Christianity that says that one wants to tell the truth and bear witness to justice, to always begin with a moral and spiritual lens through which you view the world. That may result in revolutionary consequences. So predatory capitalism loses sight of poor people, it’s immoral. Drone strikes that kill young people in Yemen or Pakistan and we say hardly a mumbling word, it’s immoral,” he said. “It’s a question of making sure you remain in contact with the humanity of every human being made in the image of God, which means you keep track of the structures.”