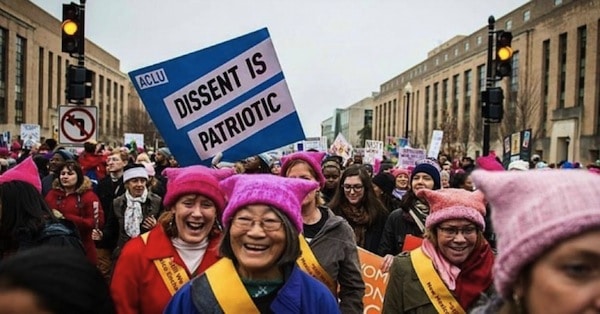 In what is being called the “biggest protest crackdown since the Civil Rights Era,” Republicans in at least 20 states have put forward or passed laws with the intention of making protest more difficult and the punishment for expressing dissent more draconian since President Donald Trump’s inauguration in January.

The state will try to devise ways to squash opposition and chill the will of people who are willing to face risks to their liberty to further their cause.
—Chase Iron Eyes, member of the Standing Rock Sioux Tribe

Throughout his bid for the White House, Trump frequently signaled his support for taking forceful action against those who vocally opposed him at campaign rallies and speeches, once suggesting a protester who interrupted a rally “should have been roughed up.”

In what was characterized as “an act of intimidation,” Trump also floated the idea of “jailing journalists who publish classified information” in a private meeting with former FBI Director James Comey.

Republican lawmakers, it appears, have been emboldened by Trump’s open contempt for free expression. News outlets, alarmed by the trend, have kept a running tally of states with anti-dissent laws in the works. Common Dreams reported in April that the number had reached 19, up from 10 in January. Now, according to The Daily Beast, 20 states are in the process of attempting to suppress peaceful resistance.

With such measures proliferating across the U.S., the United Nations condemned the trend as both “alarming and undemocratic.”

“In my dozen years of monitoring state legislation, I’ve certainly not seen a wave of anti-protest bills this large,” Lee Rowland, an attorney at the American Civil Liberties Union (ACLU), recently told the New York Times.

Attempts to crackdown on dissent have also begun to affect the work of the national press. In a move that sparked immediate outrage, Senate Republicans last week announced new rules making it difficult for reporters to interview lawmakers in the hallways of the Capitol.

On Monday, the White House barred reporters from making audio or video recordings of the daily press briefing, prompting an indignant reaction from CNN‘s Jim Acosta, who deemed it deliberate “suppression of information.”

Make no mistake about what we are all witnessing. This is a WH that is stonewalling the news media. Hiding behind no camera/no audio gaggles

Chase Iron Eyes, an activist and member of the Standing Rock Sioux Tribe, recently characterized the White House’s anti-dissent posture, as well as Republican efforts to criminalize protest, as an attempt to “send chilling effects” and delegitimize activists engaged in non-violent resistance.

“The state will try to devise ways to squash opposition and chill the will of people who are willing to face risks to their liberty to further their cause,” he concluded.