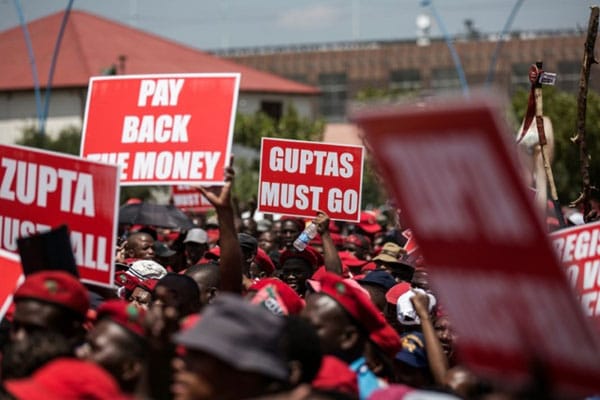 The Gupta family is at the centre of attention

It takes a certain level of cynicism to race bait South Africans to protect profits. It’s downright underhanded to hire a public relations firm to do it professionally.

For months now the phrase “white monopoly capital” has been spoken, written or tweeted all over South Africa. The phrase, according to the term’s advocates, explains the lack of wealth distribution in South Africa and the continued concentration of capital in white hands. While it is true that South Africa’s economy still remains divided along the old apartheid lines, turning that massive social challenge into a distracting catchphrase is widely seen as incendiary.

Now it seems that is exactly what London-based public relations firm Bell Pottinger did after they were contracted by Oakbay Capital, the company owned by the Gupta brothers. The wealthy immigrant Indian family have seen their last name turned into the colloquialism for corruption.

The Guptas ties to embattled president Jacob Zuma, accusations that they wield the power to hire cabinet ministers, and endless allegations of corruption have infuriated South Africans. The brothers started their own newspaper and 24-hour news television channel, but that wasn’t enough to shift the optics, so they turned to the professionals.

The phrase “white monopoly capital” was used on Twitter to shout down any criticism of the Guptas, often without a discussion of South Africa’s real problems. There were also apparently more than 100 fake Twitter accounts with bots tasked with pushing the narrative that the “state capture” report exposing the Guptas’ alleged wrongdoing was “useless and rubbish.” Some of the users were real, paid to tweet about the Rupert family, the South African founders of the Richemont luxury group, rather than the Guptas.

This week, Bell Pottinger apologized for their work with Oakbay Capital. After an independent investigation into the account, the firm fired a lead partner Victoria Geoghegan, and suspended another partner and two more junior employees, the PR firm said in a July 6 statement. The firm terminated their contract with Oakbay Capital in April after South Africans began attacking Bell Pottinger staff online.

“Much of what has been alleged about our work is, we believe, not true—but enough of it is to be of deep concern,” the public relations firm said. “There has been a social media campaign that highlights the issue of economic emancipation in a way that we, having now seen it, consider to be inappropriate and offensive.”

South Africans, however, have rejected the apology. Instead, they want Bell Pottinger to spell out exactly what they did for Oakbay Capital. The public relations firm has promised to release a full report. South Africans have reason to be suspicious: the country has been gripped by an information war that has not shied away from using the hurts of apartheid and fears over the future to stoke anger and confusion.

As public sentiment has grown against the Guptas, leading to protests outside their lavish compound in Johannesburg, a group known as Black First Land First have emerged to defend them. The group have not only guarded the Guptas home, they have also protested a bank accused of benefitting from apartheid and attacked prominent journalists who have criticized the Gupta family and Oakbay Capital.