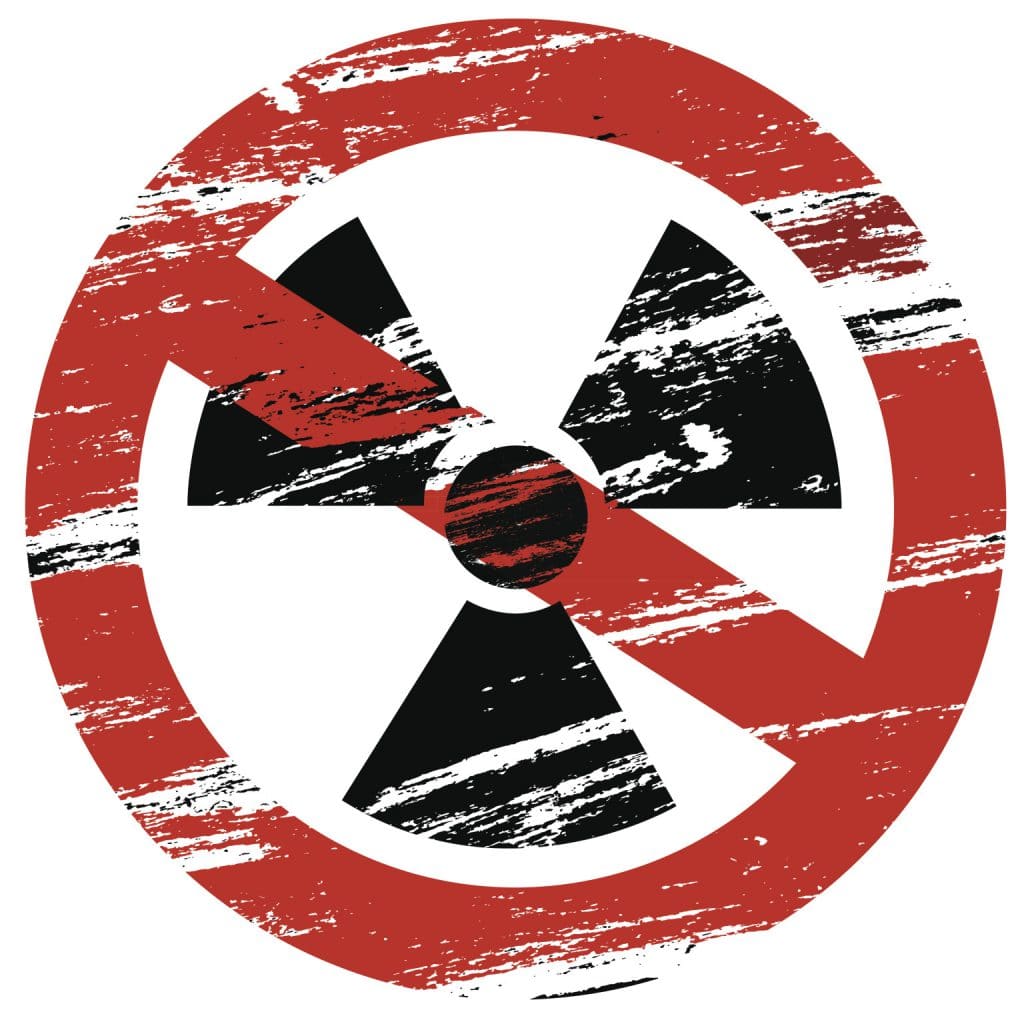 The lines of conflict between nuclear and non-nuclear powers are well-mapped. The dichotomy between the nuclear “haves” and the nuclear “have-nots” divides states into two mutually exclusive, opposed groups. This dichotomy is so pervasive in arms control discourse that it is even institutionalized within the Nuclear Non-Proliferation Treaty, the keystone of the international nonproliferation regime: Each state’s needs and priorities are defined first by its possession or non-possession of nuclear weapons, with its rights and responsibilities then assigned accordingly. Obstacles in the path toward nonproliferation and disarmament are understood as expressions of a fundamental, tectonic balancing act between nuclear and non-nuclear powers.

That same lens is consistently applied to the nuclear weapons ban process, which is often viewed as the culmination of the friction between the nuclear haves and have-nots. If that were the case—if the nuclear ban were only the latest episode in the enduring conflict between nuclear haves and nuclear have-nots—it would almost certainly be less controversial. Instead, the ban has revealed a wound that is much more raw, one that divides the non-nuclear powers. By challenging the cohesion of the have-nots, the nuclear ban provides an opportunity to test the descriptive and analytical power of the have/have-not dichotomy as a conceptual framework.

The have-nots and the need-nots

Based on an analysis of official statements, positions on the UN Resolution to begin negotiations, and participation in negotiations, a total of 147 non-nuclear states have expressed support for the ban treaty process, while 37 non-nuclear states have not. In my dataset, a single variable correlates almost perfectly with this breakdown: 89 percent of the non-nuclear states that have criticized the ban are “umbrella states” that belong to an alliance with a nuclear power or are actively seeking to join such an alliance, while only 4 percent of the non-nuclear states supporting the ban are umbrella states. To predict whether a state would support or oppose the negotiations leading to a nuclear ban with reasonable accuracy, one would only need to know its security relationship to nuclear powers. 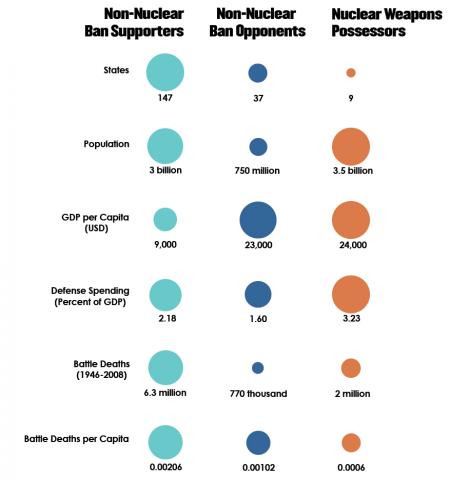 Chart on supporters and opponents of nuclear weapons ban

Nuclear alliances are not the only factor that divides the non-nuclear states, however. These states diverge along a range of other security and economic indicators as well, suggesting additional dimensions that help explain their responses to the nuclear ban.

The 37 non-nuclear states that object to the proposed ban on nuclear weapons—concentrated heavily in Europe but with prominent exceptions in South Asia—represent a total population of approximately 750 million people. For these states, the Gross Domestic Product (or GDP, the total of all goods and services) per capita in 2015 averaged about $23,000, according to the World Bank. The 147 non-nuclear states that are proponents of the ban—virtually the entire global South (which includes most of Asia, Africa, the Middle East, and Latin America)—represent slightly more than 3 billion people. In stark contrast to their northern neighbors, these states averaged less than $9,000 GDP per capita in 2015. Non-nuclear states negotiating the nuclear ban represent considerably larger, as well as considerably poorer, populations than do the non-nuclear states boycotting the ban.

In addition to having greater economic resources, the non-nuclear states that oppose the ban spend significantly less on their defense: an average of only 1.6 percent of GDP in 2015, compared with 2.18 percent for ban proponents. Defense spending reflects not just differences in the perception of security among these groups but also measurable patterns of where violent conflict occurs. In a dataset of battle deaths from 1946 to 2008, 770,000 deaths occurred within the territories of the 37 non-nuclear states that are critical of the ban. Within the territories of the states that are currently negotiating a nuclear ban, 6.3 million battle deaths occurred, more than twice as many battle deaths per capita.

The same economic and security indicators that distinguish non-nuclear states that are ban proponents from ban critics, meanwhile, also help to explain the proponents’ motivations. States seeking to negotiate a ban are not powerful states by any traditional measure, and it is not unusual for states that lack influence to seek out unconventional tools for leverage. Because of the disproportionate burden of conflict, communities in the global South experience politically organized violence not as an abstraction but as a present, self-destructive reality. An awareness of how often and how fruitlessly violence erupts might contribute to assessments of the risk of nuclear use, lending urgency to the pursuit of nuclear disarmament. Most fundamentally, non-nuclear states in the global South not only do not possess nuclear weapons, but they are also have-nots in a broader sense: These states have not experienced the economic and security gains that characterize the supposed stability of the nuclear age.

The central architecture of the Nuclear Non-Proliferation Treaty (NPT) is the “grand bargain,” a pact under which nuclear weapons states agreed not to aid any non-nuclear state in achieving a nuclear capability, and to pursue full disarmament. In exchange, non-nuclear states agreed not to pursue nuclear weapons, and to submit to international safeguards in order to access peaceful nuclear technologies. This pact is based on the premise of a shared security imperative: avoiding nuclear war. While disarmament and nonproliferation are often discussed as competing bargaining chips, within the framing of the NPT they are gains for all parties—nuclear abolition is the NPT’s prescription for the unacceptable, existential threat that nuclear weapons pose to all states.

The NPT stipulates that the benefits of peaceful nuclear technology should belong to all states, but they do not—and increasingly these benefits are clouded by drawbacks. Only eight states with operating nuclear energy facilities have joined the negotiations for a nuclear ban, and three of those are outliers from Europe. The global South has received disproportionately fewer benefits from the rise of nuclear energy, and that trend is unlikely to change. Nuclear energy facilities have become increasingly expensive, while natural gas and renewable energy sources have become cheaper and more efficient, and the risks of nuclear energy have received wide public attention since the meltdowns at the Fukushima Daiichi plant in 2011. These factors have contributed to rollbacks, early closures, and delays of nuclear energy programs around the world.

Nonproliferation is the cost of non-nuclear states’ participation in the NPT, but is also a benefit that enhances the security of all states. Along with technical safeguards, strong nonproliferation norms—or standards of behavior—limit the potential for human-managed systems to cause a global catastrophe; prevent expensive and destabilizing regional arms races; and help protect civilian populations and institutions from terrorism by non-state actors.

Nuclear-weapons-free zones pre-date the NPT and have proved to be successful in enduring hard tests of proliferation, such as Brazil and Argentina’s nuclear rivalry in the 1970s and 1980s. Argentina and Brazil, both with sophisticated nuclear energy programs, joined the Latin American zone and its verification system before they acceded to the NPT regime. Nuclear-weapons-free zones address more directly the regional risks of proliferation and can more specifically target the concerns of relevant communities—including provisions against nuclear testing, transit, and stationing that are not part of the NPT regime. While nuclear-weapons-free zones do not displace the value of the NPT, the broad participation of the global South in regional nonproliferation frameworks suggests that they rely less on the NPT than other non-nuclear states as a means of containing proliferation.

Of every value the NPT offers, disarmament is the greatest and the most urgent, but also the most illusory. The end of the Cold War engendered new optimism regarding the prospects for disarmament and produced quantitative arms reductions in the United States and Russia. Global nuclear stockpiles dropped precipitously from the heights they had achieved during the Cold War.

Unfortunately, those massive quantitative reductions have not resulted in a significant shift in the qualitative capabilities of nuclear armed states; there are still enough remaining nuclear weapons to pose a continuing existential threat to all nations. An exchange of only 100 nuclear weapons in a “localized” nuclear conflict could result in more than two billion deaths globally over a decade; the gulf between the status quo and any meaningful reduction in the threat nuclear weapons pose to human civilization is as daunting as ever.

Worse, there are no signs that the pace of disarmament will continue as it has in the last decade. As nuclear weapons states approach real security trade-offs in continuing to disarm, they have begun to signal that they are questioning the value of their disarmament commitments. Many nuclear powers have begun modernization planning that will extend the life of their nuclear systems by decades—and are reconsidering their peacetime posture of keeping missiles at a low alert status, their moratoria on nuclear testing, and their development of new nuclear capabilities.

In the current context, the initiation of a nuclear weapons ban is practically an inevitability. If the ban process seems like an unlikely or unreliable tool, it is important to understand that it is also a tool of last resort.

The nuclear ban treaty is a symptom of the divisions among non-nuclear states, not a cause; the fault lines between the have-nots and the need-nots predate the ban treaty and will endure regardless of the treaty’s outcome. Accusations of naivety or insincerity only entrench this dangerous division among states, and do nothing to address the underlying structural weaknesses that limit the sustainability and efficacy of nonproliferation and disarmament institutions.

The dichotomy between nuclear haves and nuclear have-nots has allowed the arms control community to overlook substantial barriers to further progress, despite a common final goal. To move forward, it will be necessary to face uncomfortable truths frankly, to develop stronger analytical tools, and to acknowledge voices and perspectives that have been left out of the discourse on disarmament.

Jennifer Knox conducts research and policy analysis for Global Zero. She recently completed her Master of Philosophy in International Relations at the University of Oxford, where her research focused on nuclear proliferation in the Middle East and multilateral security agreements. She earned her Bachelor of Arts in International Relations and Classical Studies from Cornell College.