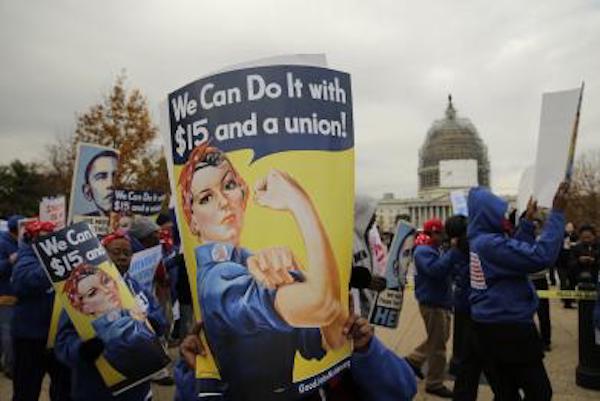 The decline in unionization is one of the most important factors promoting the concentration of income at the upper end of the income distribution.  The statement may not surprise you, but the fact that this was the conclusion of an IMF study of the causes of inequality might.

Here is how the authors of Inequality and Labor Market Institutions summarize their main findings:

The results indicate that the rise of inequality in the advanced economies included in this study has been driven by the upper part of the income distribution, owing largely to the increase in income shares of top 10 percent earners. We find evidence that the decline in union density—the fraction of union members in the workforce—is strongly associated with the rise of top income shares…. Our empirical results also indicate that unions can affect income redistribution through their influence on public policy. We further find that reductions in the minimum wage relative to the median wage are related to significant increases in inequality.

Of course, the authors of the study were quick to add: “These findings, however, should not be seen as a blanket recommendation for strengthening these labor market institutions.”

While we should never count on the IMF to promote progressive policies, the findings of the study do highlight the importance of a strong trade union movement if we want to build an economy that works for the great majority of working people.  The fact that unionization has been in decline in the great majority of the twenty advanced capitalist countries studied by the IMF researchers strongly suggests that elites know exactly what they want.

Inequality has been on the rise in almost all advanced capitalist economies, with attention increasingly focused on the growing concentration of income at the top of the distribution.  Common explanations for this trend include globalization, skill-based technological change, financial deregulation, and the decline in top marginal personal tax rates.  In their study for the IMF, Florence Jaumotte and Carolina Osorio Buitron investigate whether labor market institutions, in particular the degree of unionization and relative value of minimum wage, might also be responsible.

The authors examine inequality trends in twenty advanced capitalist countries over the period 1980 to 2010 using two main measures of inequality, the income share of the top 10 percent earners and the Gini coefficient (which ranges from 0 to 1 with higher numbers showing greater inequality).  The former is most useful for capturing changes at the top of the income distribution.  The latter, because of data limitations, is better at showing changes at the middle and bottom of the income distribution.  They therefore use Gini coefficients of gross and net income to test whether the strength of labor market institutions affects redistribution.

Figure 2 below illustrates the growth in inequality in the sample of advanced capitalist economies, and the importance of income concentration at the top of the income distribution.  As the authors explain: 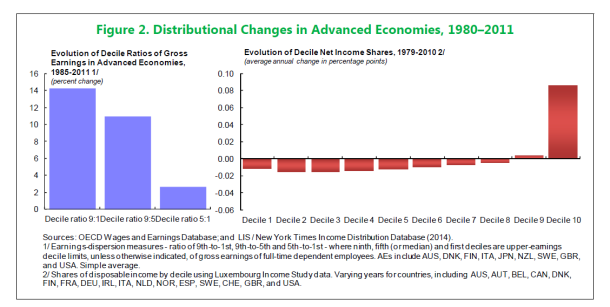 Figure 3 looks at trends in union density and relative minimum wage values, the authors’ proxies for the strength of labor market institutions.  As we can see, the degree of unionization has fallen steadily over the period, while the decline in the relative value of the minimum wage has been far more modest.  However, national experiences differ greatly.  In the case of union density, some countries actually registered an increase while in others density declined by almost 50 percent. Interestingly, the authors find no evidence of a relationship between changes in union density and changes in the minimum wage. 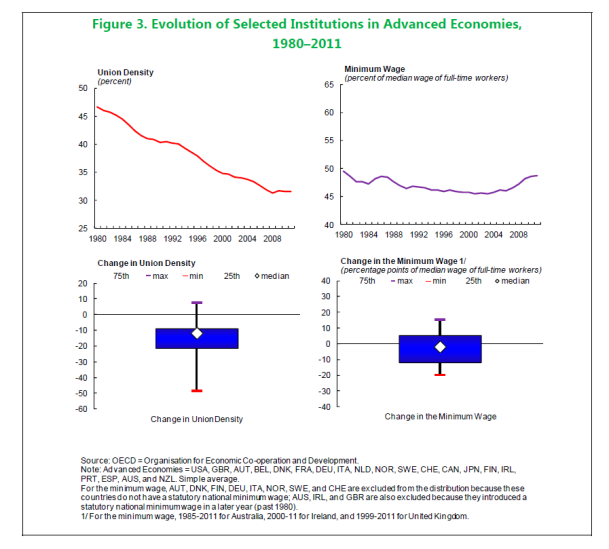 The authors begin their test of the relationship between labor market institutions and inequality by running simple correlations between the two.  They find:

While these correlation results suggest that greater union density helps workers claw back income from those at the top and improve the overall income distribution, simple correlations are far from conclusive because they do not hold other factors that might influence the variables constant.

Therefore, the authors use sophisticated econometric methods to try and isolate the importance of labor market institutions on inequality.  Among the factors they control for are:

The authors find, consistent with the literature, that technology, globalization, financial liberalization, and tax reductions all increase inequality, with the latter two variables positively associated with an increase in top income shares.  But they also find a significant negative relationship between union strength and inequality and income concentration:

The authors then test the robustness of their results by adding additional labor market, economic, and social variables, but with little change in outcome.  Their strong conclusion remains: an increase in union density reduces the share of income going to the top 10 percent and improves the overall distribution of income.

Magnitude of the effects

The authors illustrate the relative importance union density and the minimum wage to the growth in inequality in Figure 7, below. “The height of each bar measures the contribution of a variable to the rise in inequality over the period 1980–2010—calculated as the product of the change in the variable over the period and its coefficient—averaged across countries.” 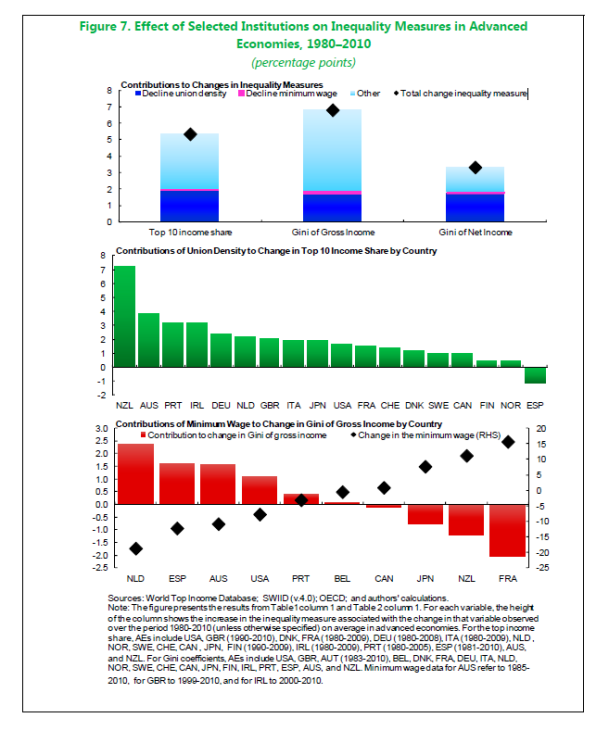 More specifically, as the authors explain:

Living conditions have deteriorated for majorities in most advanced capitalist countries.  The rise in inequality, driven by the ever-increasing concentration of income at the top of the distribution, is one major reason.  The IMF has laid out a clear program of action to improve things: strengthen unions and boost minimum wages.  Of course, our fight against inequality would be greatly enhanced if we also intensified our efforts to stop the advance of capitalist globalization, reverse the financialization of economic activity, and raise taxes on the wealthy.

I am not sure that we needed IMF researchers to clarify our tasks, but thanks anyway IMF!