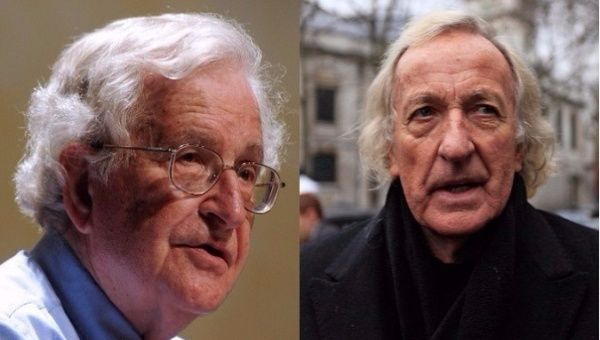 Noam Chomsky and John Pilger spoke with teleSUR, denouncing U.S. President Donald Trump’s threats to Venezuela as irresponsible, but typical according to the president’s behavior and U.S. history.

During a conference Friday in Bedminster, New Jersey, Trump told reporters that the U.S. has a number of solutions to Venezuela’s situation and military force was still an option being considered.

“We don’t talk about it but a military operation, a military option is certainly something that we could pursue,” Trump told a reporter when asked to elaborate on his statement.

Linguist and intellectual Noam Chomsky told teleSUR the president’s show of bravado was “indeed shocking and dangerous, as many commentators have pointed out. Furthermore, the Tweeter-in-chief may be painting himself into a corner.”

“It is worth remembering,” Chomsky continued, “That he is probably following his usual practice of speaking to his base, and trying to ensure that he remains in the limelight, not caring much about real world consequences (except to his pocketbook and image).”

“The best hope is that some of the generals around him, who presumably understand the consequences, will manage to control him,” he concluded.

Australian journalist John Pilger commented that Trump’s suggestion for an aggressive course of action falls in line with U.S. history in the past century.

“Donald’s Trump’s threat of a military invasion of Venezuela is typical of U.S. threats to the world over the past 70 years,” he said.

“The U.S. has already invaded Venezuela with its subversive groups, such as the NED, that back a so-called opposition that seeks to overthrow an elected government by force: a high crime under international law,” Pilger told teleSUR, speaking of the U.S.’s involvement and funding of the violent right-wing opposition whose protests have brought about the deaths of over 120 Venezuelans.

“It’s unlikely the U.S. itself will invade Venezuela — Washington only invades defenseless countries, and Venezuela is not defenseless. But at the very least, the decent world must stand with Venezuela, now subjected to a virulent propaganda that is war by media. If Venezuela falls, humanity falls,” the journalist stated.

Shortly after Trump announced his consideration of a military option to Venezuela, the White House issued a statement saying it had rejected a request from his Venezuelan counterpart Nicolas Maduro to have a telephone conversation with him.

According to Chomsky, the war-hungry state has ignored proposals for peace delivered by Chinese and Democratic People’s Republic of Korea authorities.

“North Korea will freeze its weapons programs and the U.S. will call off threatening military maneuvers on its borders. The record gives considerable hope that further progress could be made from there,” Chomsky advised.