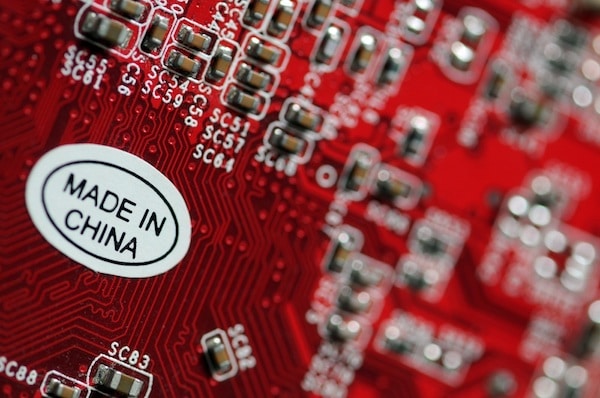 Electronics made in China

President Trump likes to talk up his success in promoting the reindustrialization of the United States and the return of good manufacturing jobs. But there is little reason to take his talk seriously.

For example, as reported in a recent article in the Oregonian, Microsoft just decided to close its two year old Wilsonville factory, where it built its giant touch-screen computer, the Surface Hub. As the article explains:

Just two years ago, Microsoft cast its Wilsonville factory as the harbinger of a new era in American technology manufacturing.

The tech giant stamped, “Manufactured in Portland, OR, USA” on each Surface Hub it made there. It invited The New York Times and Fast Company magazine to tour the plant in 2015, then hired more than 100 people to make the enormous, $22,000 touch-screen computer.…

“We looked at the economics of East Asia and electronics manufacturing,” Microsoft vice president Michael Angiulo told Fast Company in a fawning 2015 article that heaped praise on the Surface Hub and Microsoft’s Wilsonville factory.

“When you go through the math, (offshoring) doesn’t pencil out,” Angiulo said. “It favors things that are small and easy to ship, where the development processes and tools are a commodity. The machines that it takes to do that lamination? Those only exist in Wilsonville. There’s one set of them, and we designed them.”…

But last week Microsoft summoned its Wilsonville employees to an early-morning meeting and announced it will close the factory and lay off 124 employees – nearly everyone at the site – plus dozens of contract workers.…

Even as President Donald Trump heralds “Made in America” week, high-tech manufacturing remains an endangered species across the United States. Oregon has lost more than 14,000 electronics manufacturing jobs since 2001, according to state data, more than a quarter of the total job base.

Microsoft is moving production of its Surface Hub to China, which is where it makes all its other Surface products. Apparently, the combination of China’s low-cost labor and extensive supplier networks is an unbeatable combination for most high-tech firms. In fact, the Oregonian article goes on to quote a Yale economist as saying:

“Re-shoring” stories like the tale Microsoft peddled in 2015 are little more than public relations fakery,” [providing] “lip services or window-dressing to please politicians and the general public.”

Foxconn says it is investing

But now we have another bigger and bolder re-shoring story: The Taiwanese multinational Foxconn has announced it will spend $10 billion to build a new factory somewhere in Wisconsin (likely in Paul Ryan’s district), where it will produce flat-panel display screens for televisions and other consumer electronics.

As reported in the press, Foxconn is pledging to create 13,000 jobs in six years—but only 3000 at the start. In return, the state of Wisconsin is offering the company $3 billion in subsidies.

According to the Trump administration, this is a sign that its efforts to bring back good manufacturing jobs is working. The Guardian quotes a senior administration official “who said the announcement was ‘meaningful,’ because ‘it [represents] a milestone in bringing back advanced manufacturing, specifically in the electronics sector, to the United States.’” President Trump followed with “If I didn’t get elected, [Foxconn] definitely would not be spending $10bn.”

However, there are warning signs. For example, as an article in the Cap Times points out, Foxconn doesn’t always follow through on its promises:

In fact, even the Wisconsin Legislative Fiscal Bureau is worried that the state may be overselling the deal, promising billions for very little.  As a Verge article reported:

Wisconsin’s plan to treat Foxconn to $3 billion in tax breaks in exchange for a $10 billion factory is looking less and less like a good deal for the state. In a report issued this week, Wisconsin’s Legislative Fiscal Bureau said that the state wouldn’t break even on its investment until 2043 — and that’s in an absolute best-case scenario.

How many workers Foxconn actually hires, and where Foxconn hires them from, would have a significant impact on when the state’s investment pays off, the report says.

The current analysis assumes that “all of the construction-period and ongoing jobs associated with the project would be filled by Wisconsin residents.” But the report says it’s likely that some positions would go to Illinois residents, because the factory would be located so close to the border. That would lower tax revenue and delay when the state breaks even.

And that’s still assuming that Foxconn actually creates the 13,000 jobs it claimed it might create, at the average wage — just shy of $54,000 — it promised to create them at. In fact, the plant is only expected to start with 3,000 jobs; the 13,000 figure is the maximum potential positions it could eventually offer. If the factory offers closer to 3,000 positions, the report notes, “the break-even point would be well past 2044-45.”

The authors of the report even seem somewhat skeptical of the best-case scenario happening. Foxconn is already investing heavily in automation, and there’s no guarantee it won’t do the same thing in Wisconsin. Nor is there any guarantee that Foxconn will remain such a manufacturing powerhouse. (Its current success relies heavily on the success of the iPhone.)

It is because of concerns like these, that the Milwaukee Journal Sentinel reports that the state’s Senate Majority Leader has said he doesn’t yet have the votes to pass the tax package Governor Scott Walker has promised.

President Trump has also spoken often about his determination to revisit past trade deals and restructure them in order to strengthen the economy and boost manufacturing employment.  However, it is now clear that the agreement restructuring he has in mind is what he calls “modernization” and that translates into expanding the terms of existing agreements to cover new issues of interest to leading US multinational corporations.

As Inside US Trade explains:

Commerce Secretary Wilbur Ross on Wednesday said “the easiest issues” to be addressed in North American Free Trade Agreement modernization talks “should be” those that were not part of the existing agreement, which entered into force in 1994.

“The easiest ones will be the ones that weren’t contained in the original agreement because that’s new territory; that’s not anybody giving up anything,” Ross said at an event hosted by the Bipartisan Policy Institute on May 31. “And by and large, those should be the easiest issues to get done.”

Ross added that those new issues are important “because one of our objectives will be to try to incorporate in NAFTA kind of basic principles that we would like to have followed in subsequent free-trade agreements, rather than starting each one with a blank sheet of paper.”

Among those issues — which he called “big holes” in the old agreement — he listed the digital economy, services, and financial services. . . .

Ross reiterated the administration’s stance that the “guiding principle is do no harm” in redoing NAFTA, while the second “rule of thumb” is to view concessions made by Mexico and Canada in the Trans-Pacific Partnership negotiations “as sort of a starting point” for NAFTA talks.

Asked whether the administration has set itself up for “unrealistic aspirations” on NAFTA — promising to return to the U.S. jobs that the president has often claimed were lost due to the agreement with Mexico and Canada — Ross cautioned against viewing a retooled deal as a “silver bullet.”

In short, it is foolish and costly to believe the promises made to working people by leading corporations and the Trump administration.  Hopefully, growing numbers of people are getting wise to the game being played, making it easier for us to more effectively organize and advance our own interests.