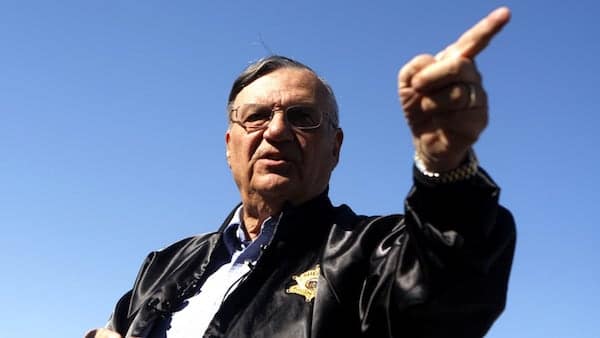 The Trump presidency has been the most shocking and awful in modern American history, with the president threatening nuclear war, saying that “fine people” march alongside Nazis, implementing a “Muslim ban.”

But Trump’s pardon of former sheriff Joe Arpaio is the worst, most dangerous, and most terrifying of all his antics.

Not only because it is an endorsement of Arpaio’s racism and birtherism, not only because it was done without any of the appropriate processes and procedures, but first and foremost because it is a direct assault on the rule of law itself. I haven’t used the word before, and I hesitate to use it now, but Trump’s action is fascist.

Here’s why: Arpaio was convicted of contempt of court in July, in the face of overwhelming evidence of guilt. It was never contested that he targeted people based on race and jailed them (in inhuman conditions) if they were suspected of being undocumented immigrants. Fortunately, we live in a country of laws, not men, and so in 2011, a court ordered him to stop doing so.

Arpaio ignored the court order. He decided he was above the law, and went on with his racist and blatantly unconstitutional actions. And he bragged about it. One cannot imagine a clearer case of contempt of court than this.

This is what Trump pardoned at 8 p.m. Friday night, as a hurricane bore down on Texas, without the usual review from the Department of Justice, and shortly after a terrifying Phoenix, Arizona rally in which a crowd cheered when Trump said Arpaio was “doing his job.”

Of course, Arpaio was not doing his job. His job was to enforce the law; instead, he broke it. He decided that he was the arbiter of right and wrong, not the judiciary or legislature. Never mind the Constitution and its delegation of powers to the judiciary. Sheriff Joe’s opinions take precedence.

And perhaps worst of all, Arpaio decided that on the basis of ethnocentric nationalism: because undocumented immigrants are a threat to society, he, Sheriff Joe Arpaio, must take the law into his own hands. The howling mob at Trump’s Phoenix rally doesn’t indicate some silent majority of good Americans. It showed us a bloodthirsty, nativist crowd of ultra-patriotic, un-American radicals with no respect for our democratic institutions. (Let us not forget the cheers when Trump derogated the free press also.) It showed us people are whipped up into an ethno-nationalist frenzy. It showed us exactly why the rule of law is such an important bulwark against tyranny, whether of the individual or the mob.

Trump’s rally and pardon are literally the dictionary definition of fascism, which Merriam-Webster defines as “a political philosophy…. that exalts nation and often race above the individual and that stands for a centralized autocratic government headed by a dictatorial leader.”

Build out “the individual” to include civil rights and the rule of law, and you’ve got exactly what Arpaio did, and exactly what Trump has now endorsed and pardoned.

“Dictatorial leader” closely fits Trump’s continual transgression of the sacred boundaries between the executive and the Justice Department. It is now known that Trump tried to persuade Attorney General Jeff Sessions to drop the charges against Arpaio before Arpaio’s trial concluded. Trump is also a demagogue, who has thumbed his nose at the courts, which have been one of the few effective checks on his power.

And, again, all the context of a nationalist fervor that sent chills down my Jewish-American spine.

It may be that to invoke fascism and Nazi Germany is, as Godwin’s Law proposes, the sign that one has lost the argument. Certainly, I have never before used the term “fascist” to describe Trump’s right-wing populism, his authoritarianism, his ignorance of and disregard for the rule of law, his incendiary rhetoric about Muslims, and his coddling of white nationalists and the “fine people” who march with them.

But at a certain point, “fascist” becomes the most accurate term to describe what this man does and the Arpaio pardon is that point. It is the perfect confluence of tendencies: disregard of the courts, mob justice, ethno-nationalism, authoritarianism. It is the brute exercise of power to attack a disliked minority, unchecked by the rule of law. “Fascist” is not an incendiary slur – it is an accurate description.

Now, some might say, pardons are a presidential prerogative. And they’ve been controversial before (see Gerald Ford), so what’s different now?

What’s different is what is being pardoned, and why, and how. There was nothing improper about Arpaio’s trial and conviction. There was no doubt that he was guilty of contempt, and that he defied a court order in order to maintain a race-based regime of terror that targeted innocent people on the basis of their ethnicity. Arpaio was pardoned simply because Trump agrees with Arpaio’s fascistic view of America in which self-defined patriotism is more important than law.

Nor is this some marginal issue, incidental to Trump’s rule. No, this is right at the dark center of his victory: the fear among white Americans that their world is changing, and that minorities are to blame. Of course, these people aren’t wrong: their world is changing, becoming more diverse, more globalized, and less dependent on the skills of 20th-century workers – just as Italy, Germany, and Spain were changing as they embraced fascism. What is terrifying is the channeling of that fear and confusion into jingoism, nationalism, and even racism, now with a strong, tough-talking leader who cares little for democracy and civil rights.

This is a dark moment in American history, perhaps one of the darkest, illuminated only by the broad swath of conservatives, moderates, and liberals who have rejected what Trump and Arpaio stand for. Let us pray that they—we—prevail.