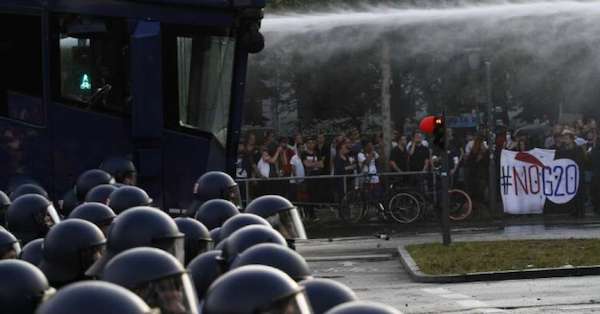 In a move critics characterized as a dangerous threat to freedom of expression, the German government announced on Friday its decision to shut down a left-wing website it claims has links to violence that broke out during the G20 summit in Hamburg, Germany last month.

“This is what advocates of censorship are spawning,” said The Intercept‘s Glenn Greenwald in response to Germany’s decision.

Greenwald has sharply criticized those who have, in the aftermath of right-wing violence, advocated the censorship of right-wing views—a position he argues creates a slippery slope that ultimately “will backfire” by “ensuring that those who advocate state censorship today are its defenseless targets tomorrow.” Evidence supporting this thesis, Greenwald suggests, can be seen in the German government’s case against linksunten.indymedia.org.

In pursuing the site, the Washington Post reports, Germany’s government treated it as “an ‘association’ instead of a media outlet,” which “meant constitutional protections for free expression were less firm.”

Internet watchdog groups in Germany have warned that far-right websites are growing in popularity—and the government shut down one such forum, “Altermedia Deutschland,” last year—but Friday’s action was the first aimed at the left.

The website has been a destination for leftists of many stripes—anarchists and squatters, anti-capitalists and antifascists, opponents of the police and of critics of borders. It served as a log of opportunities for direct action and celebrated protests and other forms of interference. It also tracked opposing forces.

In addition to shutting down the website, German law enforcement conducted raids “in the early hours of Friday against several leading members and supporters of the website,” the New York Times reported, but there was no indication that these individuals were being charged with participating in or inciting violence.

Many pushed back against the government’s decision to close down the website.

Ulla Jelpke, a spokesperson for Die Linke—a democratic socialist party—said that while her party repudiates “any sort of call to violence,” the government’s decision to shutter Linksunten amounts to an “illegitimate act of censorship, and a willful cut in the freedom of speech and press freedom.”

“I find a lot of the things on this page very stupid—I can’t condone a lot of it,” she said. “If you have articles that are anti-capitalist, but otherwise are not prosecutable—our constitution allows you to be anti-capitalist. So the question is: who does it affect tomorrow, people who support anti-capitalist politics?”

Jelpke also objected to the government’s classification of the site as an “association” in order to skirt constitutional protections.