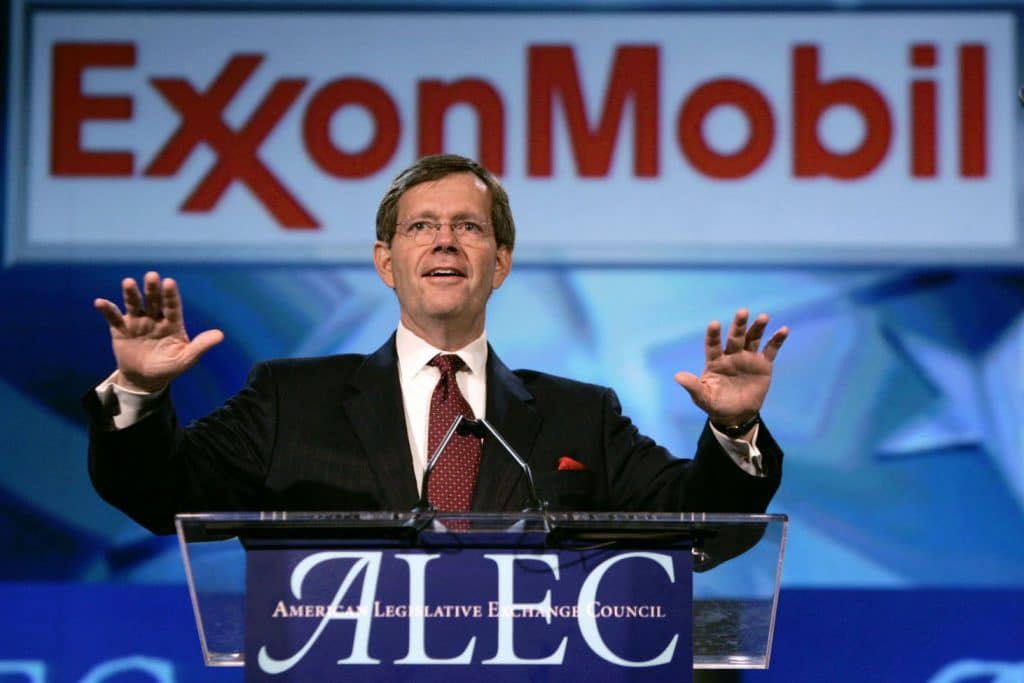 Recently, organizers in a number of cities have helped to build strong local coalitions which successfully won passage, either though ballot or elected official vote, of measures that improved majority living and working conditions.  Examples include higher minimum wages as well as fair scheduling, paid leave, and improved prevailing wage laws.

Now, conservative forces, organized by groups such as ALEC, are using their influence in state legislatures to pass preemption laws to block this progressive city strategy and, in some cases, roll back past gains. This development is well described by Marni von Wilpert in a recent Economic Policy Institute report titled “City governments are raising standards for working people—and state legislators are lowering them back down.”

Preemption and the rise of the right

A case in point, as described by von Wilpert:

At one time, preemption was used by more liberal state governments to keep more conservative city governments from undercutting social standards.  However, as von Wilpert explains, “Now that the Republican Party controls 33 governorships and has majority representation in both chambers of most state legislatures, conservative state legislators have increasingly used preemption laws to strike down local government efforts to increase the quality of life for working people in their municipalities.”

The federal minimum wage has not been increased since 2009. In 2017, the federal minimum wage of $7.25 was worth 12 percent less, in real terms, than when it was last raised, and is 27 percent below its peak value in 1968.  Working people have therefore pushed hard to get their states and/or localities to take action, and with growing success at the local level.  “Before 2012, only five localities had enacted their own local minimum wage laws, but as of 2017, forty counties and cities have done so.”

But now, as the following figure from the EPI report makes clear, conservative state lawmakers are fighting back, using preemption to restrict local action.  Twenty-five states now have preemption laws denying local governments the right to set their own minimum wages; more than half of these laws were passed beginning in 2013. 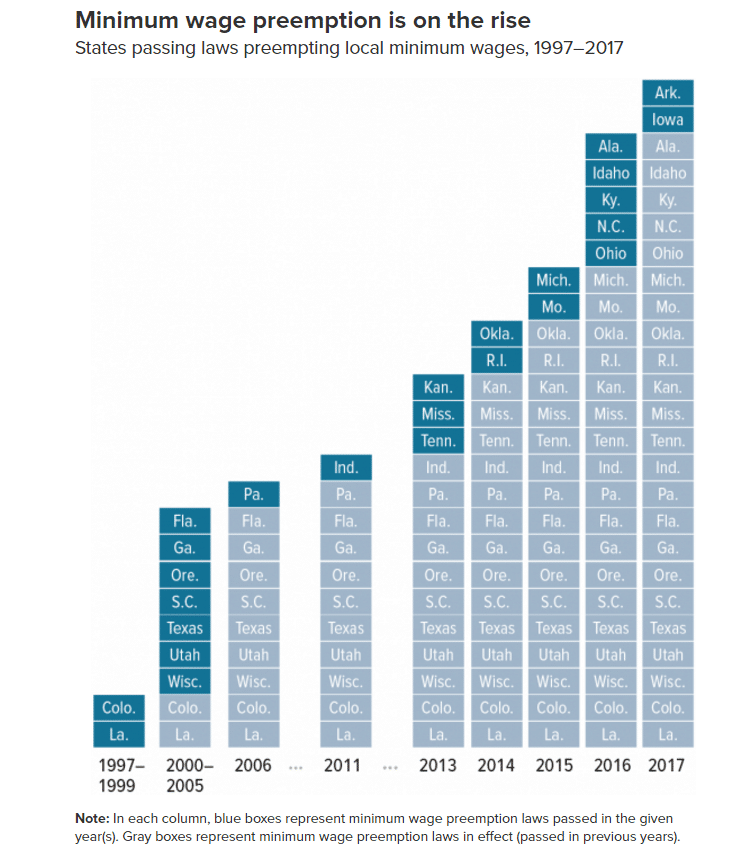 State level right-wing forces have also taken aim at paid leave laws, which generally include the right to paid sick and family medical leave.  There is no federal law guaranteeing workers the right to paid leave, and, as with minimum wage gains, workers have been most successful in winning paid leave at the local level.  However, as we see in the following figure, state legislatures, since 2013, have been busy denying local governments the right to implement their own higher standards.  Twenty states now have preemption laws covering paid leave. 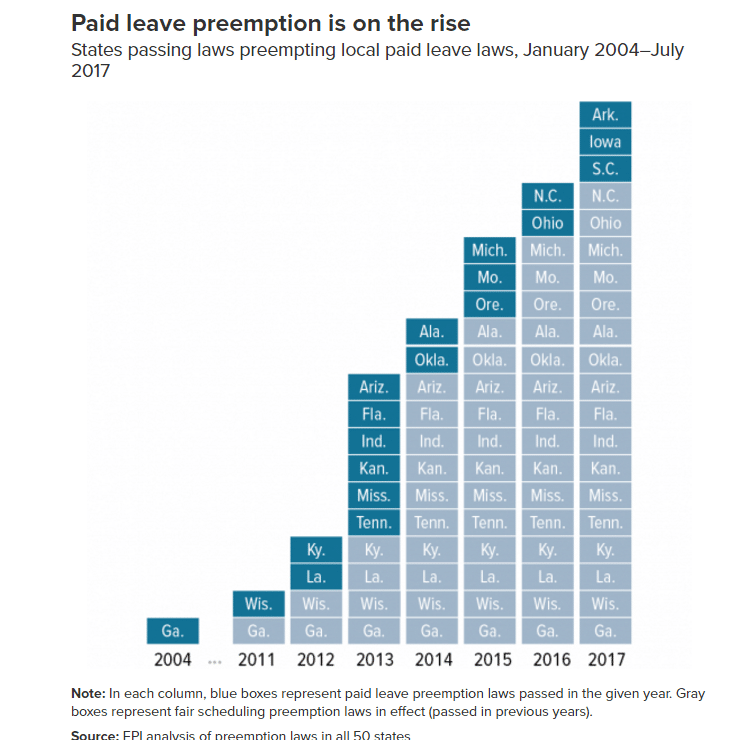 There are currently no federal laws that ensure workers basic fairness and predictability in scheduling.  As von Wilpert describes, 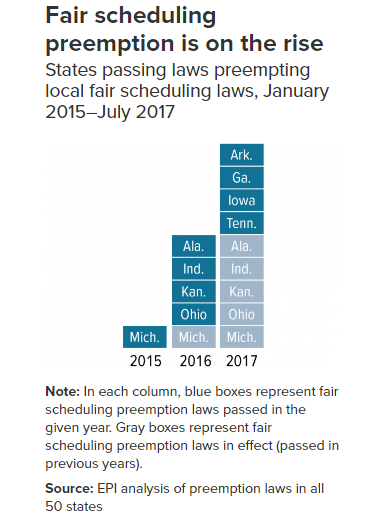 And, as in the other areas of labor rights discussed above, we see a similar explosion in action by states to restrict the right of their localities to set higher standards for public contracting. At least 12 states now have preemption laws, all but one of which was passed beginning in 2013. 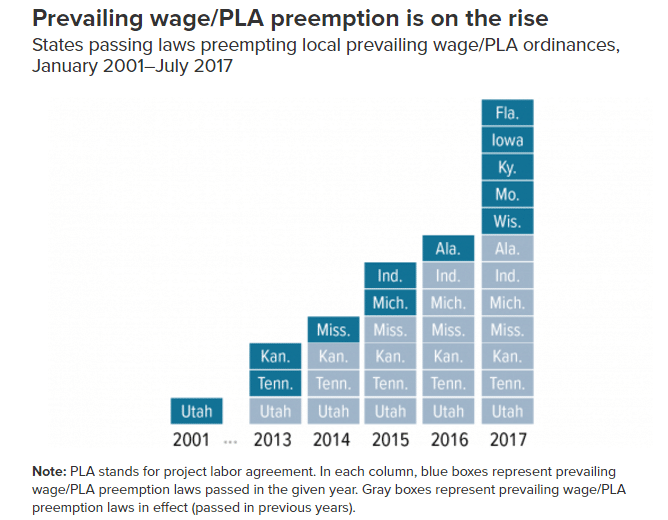 The current right-wing strategy highlighted above greatly reduces what working people can win at the city level in many states.  Of course, there are still many states where local initiates can bring real improvement and these should obviously continue.  At the same time, it seems clear that the political environment is changing and not for the better in terms of what local efforts can produce.

While far from easy, this means that organizers have little choice but to deepen and extend their work. Among other things, this means pursing efforts to link local/city coalitions in order to strengthen state level influence.  It also means that more emphasis needs to be put into building organizations as well as alliances of working people around a vision of good jobs for all, a strong and accountable public sector serving human needs, and healthy cities and communities that is to be won through organizing and direct action as well as electoral work.  Above all,  this will require seeking and sharing creative ways to strengthen working class solidarity, which is key if we are to overcome the existing divisions that allow right-wing forces to set the terms of our political choices.