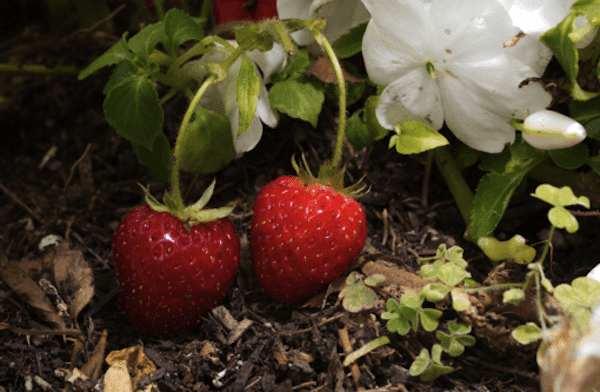 Photo by jamiehamelsmith | CC BY 2.0

I am lying in a meadow high in the Rocky Mountains. The sun is warm and comforting. I watch the clouds, puffy white in the blue sky, but soon pull a cap over my eyes and enter that state where thoughts swirl through your head and you don’t know if you’re sleeping or not.

While I rest, Karen is looking for wild strawberries. She has a remarkable eye for them, and has found the delicate plants everywhere from along the ocean in Nova Scotia to the volcanic highlands of the Big Island in Hawai’i. She remembers as she is searching the hard labor of picking the tiny berries as a girl, gathering enough for her mother to make jelly. No easy task as I have learned when she finds a patch big enough for me to collect some too.

When all you have ever eaten are the overly large and often woody and tasteless strawberries sold in grocery stores, putting a wild one in your mouth is a revelation. A gift from the earth, sweet, tart, wonderful, perfect. They leave your fingers smelling like, well, strawberries.

We’ve found many fruits on our hikes. Strawberries, raspberries, blueberries, cherries sweet and sour, currants, huckleberries, apples, plums, even liliko’i (passion fruit), guava, lemons, and limes. Some like the berries grow wild. Others have flourished long after they were planted and then abandoned.

Seeing and tasting these gifts of nature can’t help but make you think of the foods most of us eat. Heavily processed and full of salt, hydrogenated oil, and high fructose corn syrup; loaded with chemicals; laden with pesticides; grown on factory farms; treated like any other mass-produced products, aimed for the market with costs per unit low and profits high. Our crops are planted and harvested in this country by a largely black and brown workforce, poorly paid and forced to live in shacks and tents. They are poisoned, along with their children, every day they labor, and their life expectancy, in the United States, is barely fifty years. What it was when Edward R. Murrow’s documentary, Harvest of Shame, was shown on television in 1960. Much the same can be said about farm laborers anywhere in the world.

Literally underlying the production of food is soil, that “mixture of minerals, organic matter, gases, liquids, and countless organisms that together support life on Earth.” Food requires soil and labor, and as should be obvious, our relationship to the soil has always been a feature of human existence. For most of our time on earth, we have connected to the soil in an integral and sustaining way, taking care of it so that we could continue to harvest its gifts. We learned as we produced our sustenance, and developed greater understanding of how the earth yielded its bounties. While we made mistakes that sometimes led to disaster, we lived in relative harmony with the soil and all of the natural world.

Given our past, more than 100,000 years, it is astonishing that today, with our scientific knowledge, technological prowess, and wealth, we squander soil with reckless abandon. We devote less and less of it to food production and more and more to mega cities, endless suburbs, and exurbs. Of the land presumably reserved for farming, we grow soybeans and corn for animal feed and biofuels. In the Global South, peasants are losing their land to rich speculators, who hold large acreages idle in anticipation of price increases. Everywhere we cut down trees, build huge dams, allow agriculture to contaminate the air, water, and earth. We have so degraded the soil that it has lost its material elasticity, its ability to thrive and regenerate, which means that like an overstretched rubber band, it can never be restored to full health. The natural harmony that once defined humanity has disappeared. The awe with which we embraced the earth, the love we once felt for the land, had been replaced by arrogance, a hubris declaring that we can do what we please, and if the soil doesn’t like it, too bad for it.

Our treatment of the earth, of the dirt beneath our feet, is directly connected to our system of food production. The pollutants we put in the soil show up in our groceries. And the entire wretched business of agriculture derives from the nature of our economic system, which compels every giant corporation, every “entrepreneur,” to grow, to compete, to consider everything and everyone a commodity. Buy cheap, sell dear. These are the words that drive all of life.

There is no end to the propaganda denying this. Green Revolutions, GMO seeds, endless advertisements (even Tyson claims to be producing organic chicken in an ad that would make you think that this company is a steward of the earth), misleading reports from Non-Government Organizations and the major global financial entities like the IMF and the World Bank. If we were to take the hype as truth, we would conclude that the world has never been more productive, healthier, and happier.

Corporate agriculture also reinforces the marked increase in income and wealth inequality evident in almost every nation. Those with means get decent nourishment and enjoy good health; those without have neither. Those who grow the food suffer; those who sell it get rich. Making matters worse, those with power tell us that the only remedy for the problems to which they will admit, is more of the same. More chemicals, more GMOs, more mechanization, more land consolidation.

It doesn’t have to be this way. We already know how to treat the soil with respect, producing organically, on relatively small farms, utilizing techniques of land management that are in harmony with a sustainable environment. We know, from examples around the world, especially in Cuba, how to feed urban populations with food grown in the cities themselves. There are food cooperatives, run democratically and non-capitalistically, that combine food production and distribution, serving local communities. We know how to conduct socially useful research that will show what works and what does not. If the will were there, we could greatly reduce global warming.

As we did these things, we would become more aware of the necessity for closing the ecological rifts that now threaten our existence, mainly the rift between town and country that has shaped the modern world, with destitute rural areas on the one hand and mega-cities on the other. Our actions would in turn shape our consciousness and help us build an ever more communal world.

It is one thing to say what needs to be done, and another to believe that it will happen. It is probably easier to imagine the sun growing cold and the solar system dying than it is to be sanguine that humanity will do the right thing. All I can do is try to tell the truth. And remember the wild strawberries, in the hope, vain though it may be, that someday the earth will smell, taste, and feel as alive as it once was.