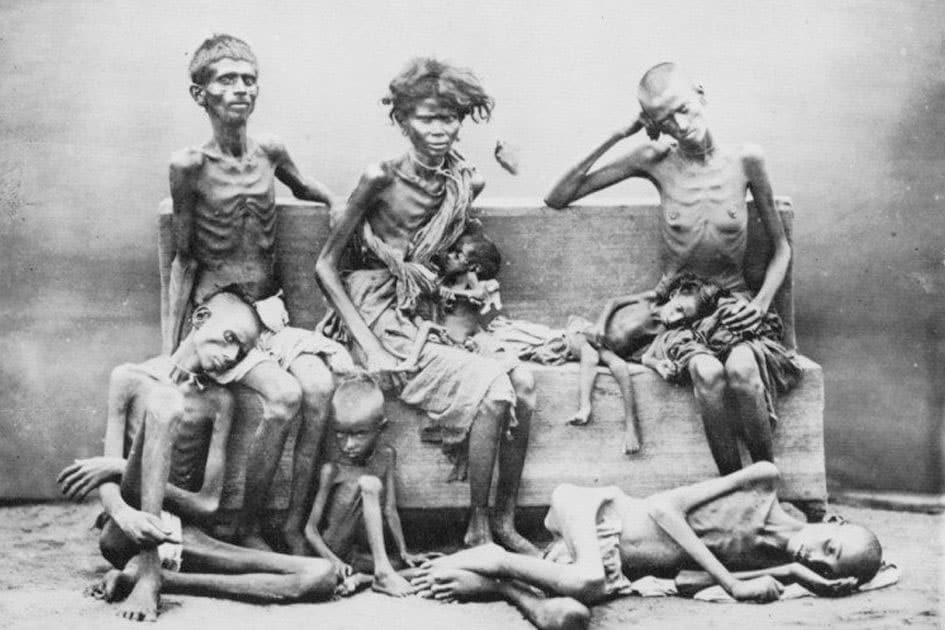 The ugliness of colonial power in India emerged at its end with the Bengal Famine and the Partition | Wikimedia Commons.

[There is a style of indifference to which they are welcome;
But our wishes, we will continue to list.]

In 1950, Aimé Césaire, one of the clearest voices of the 20th century, looked back at the long history of colonialism that was coming to an end. He wanted to judge colonialism from the ashes of Nazism, an ideology that surprised the innocent in Europe but which had been fostered slowly in Europe’s colonial experience. After all, the instruments of Nazism – racial superiority as well as brutal, genocidal violence – had been cultivated in the colonial worlds of Africa, Asia and Latin America. Césaire, the effervescent poet and communist, had no problem with the encounter between cultures. The entanglements of Europe’s culture with that of Africa and Asia had forged the best of human history across the Mediterranean Sea. But colonialism was not cultural contact. It was brutality.

Césaire was adamant: colonialism had produced nothing that would earn it respect in the scales of history. This was in 1950, when a few nations has just emerged out of the scar of colonialism and when many societies fought pitched battles to extricate themselves from colonial power.

The ugliness of colonial power in India emerged at its end, with callous policy by the British engendering the millions dead in the Bengal Famine of 1943, and the million dead and millions displaced in the Partition of 1947-’48. It was harsh too when one considers that after centuries of rule, the British left behind a region with a literacy rate of merely 12%. Indian historians had looked back at the record of British rule in India to find economic and political policies designed to impoverish the country at the expense of Britain, with massive surpluses from India sucked into Britain to underwrite the industrial revolution and to build a British military force capable of ruling the sprawling British Empire. “India is to be bled,” said the Marquees of Salisbury in the 1870s. So it was.

The Indian subcontinent did not submit to this “drain of wealth” with submissiveness. Revolts came hard and fast, from the early days of British colonial rule in the 18th century (such as the Fakir-Sanyasi rebellion in the 1770s) to the final days of its rule in the 20th century (such as the Patri Sarkar in the 1940s). In the aftermath of one of these rebellions, in 1857-58, the British cracked down with singular brutality. One young soldier, Edward Vibart, said of the massacres he helped conduct in Delhi’s Kucha Chelan, where 1,400 civilians were killed: “The orders went out to shoot every soul. It was literally murder.” “Peppering away at niggers” was the phrase often used in British memoirs. It defines the colonial experience from Jallianwala Bagh (India) in 1919 to the Hola massacre (Kenya) in 1959.

In 1960, the United Nations General Assembly passed the “Declaration on the Granting of Independence to Colonial Countries and Peoples”, which drew a firm red line through the record of colonialism. Colonial rule’s continued existence, said the UN’s free nations, “prevents the development of international economic cooperation, impedes the social, cultural and economic development of dependent peoples and militates against the United Nations ideal of universal peace”. In other words, colonialism was an abomination that needed to be brought to an end, since “the process of liberation is irresistible and irreversible”.

‘Peppering away at niggers’, the phrase often used in British memoirs, defines the colonial experience from Jallianwala Bagh in India to the Hola massacre in Kenya. Photo credit: Wikimedia Commons.

In the past decade, several prominent European and North American intellectuals, with very poor analytical skills, have produced work that seeks to overturn the consensus against colonialism. Some of this work – such as produced by the British counterfactual historian Niall Ferguson – is openly rooted in the present moment of American imperial wars rather than in a serious reconsideration of the historical record. In his book Empire: How Britain Made the Modern World, Ferguson argued that British colonial rule – brutal here and there to be sure – had given places such as India parliamentary democracy and the English language. India, he wrote, “owes more than it is fashionable to acknowledge to British rule”.

The context is the 2003 American war on Iraq, with people such as Ferguson urging the United States to colonise Iraq and set aside the anti-colonial values of the United Nations and of the world’s peoples. When books arrived from serious scholars that demonstrated the brutality of the colonial experience, these were savaged by Western ideologues buoyed by Ferguson and the U.S. war on Iraq. Caroline Elkins’ Britain’s Gulag: The Brutal End of Empire in Kenya and Olivier Le Cour Grandmaison’s Coloniser, exterminer. Sur la guerre et l’État colonial faced harsh scrutiny in the Western world for being forthright about colonialism’s fascistic past. The space was being created to now ask questions that had appeared settled for a half century: that colonialism was on balance a benevolent part of human history.

In the current issue of Third World Quarterly, a mediocre essay appears with the grand title “The Case for Colonialism”. This essay, by Bruce Gilley, is within the parameters set by Ferguson. The essay, as many have shown, violates the basic protocols of academic scholarship; the author misuses the work of scholars such as Berny Sébe, Alexander De Juan and Jan Pierskalla, citing their essays to make points that they simply do not make. The author’s “cost-benefit analysis” poses certain indicators such as “improvements in living conditions” and “training for self-government” to show – against any evidence – that without colonialism the situation in Africa, Asia and Latin America would be worse. If India’s literacy rate was low in 1947, the author would contend, it would be lower still if the British had not been India’s imperial masters.

The essay appears in the age of Donald Trump, when white supremacy is back and the itch for colonialism is on the horizon. The idea that liberals, post-colonials and Marxists have denigrated “white history” is a constant refrain from the racists. This essay does not merely suggest that the “white history” of colonialism has been vilified, but that the Europeans should return to finish the job. “Maybe the Belgians should come back” to the Congo, suggests the author – a statement that discounts the at least 10 million people massacred in a decade by the rapacious rule of the Congo by Belgium’s king Leopold. The reputable scholarly work that now exists for the Congo includes Daniel Vangroenweghe’s Du Sang Sur Les Lianes; Jules Marchal’s L’État Libre du Congo: Paradis Perdu, L’histoire du Congo, 1876-1900; Adam Hochschild’s King Leopold’s Ghost: A Story of Greed, Terror and Heroism; and Jen Luc Vellut’s La Mémoire du Congo: Le Temps Colonial. None of this enters either this author’s framework or Ferguson’s. They are meticulously blind to the grave and consequential crimes of colonialism. 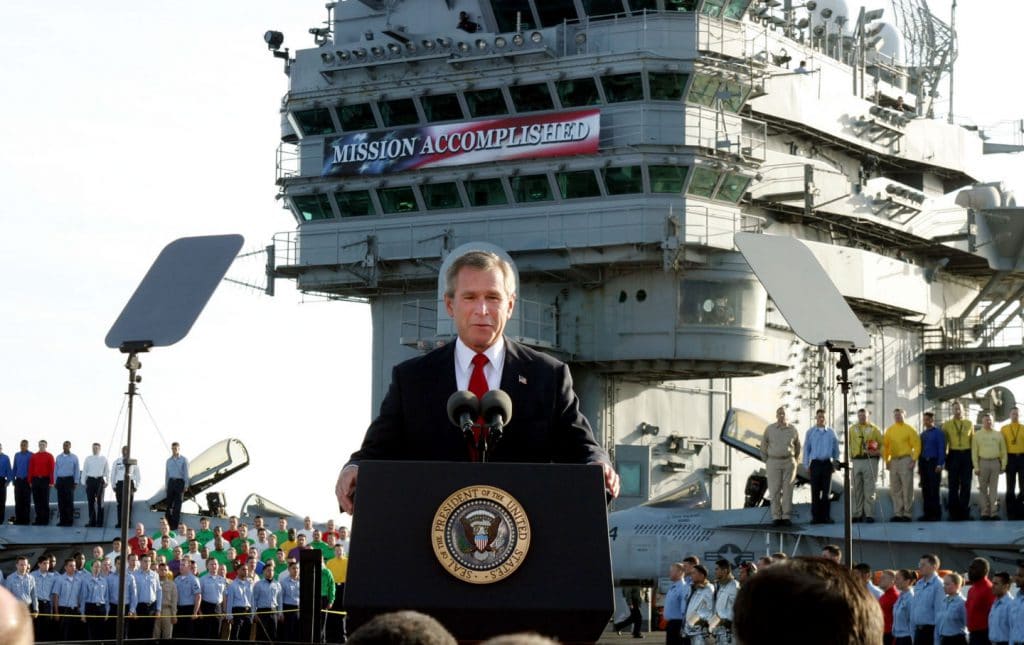 When books arrived from serious scholars that demonstrated the brutality of the colonial experience, these were savaged by Western ideologues buoyed by the U.S. war on Iraq. Photo credit: Reuters.

Such work is to be expected. These are the times when white supremacy has made a comeback, times when colonialism has been on the agenda since the U.S. war on Iraq. Western liberals such as Michael Ignatieff, who made the case for Western colonialism in The New York Times Magazine on January 5, 2003, opened the door for such an argument for colonialism. Ignatieff argued that the U.S. needed to take up “the burden” to impose order on a fractious world. He was not alone.

What was most shocking about the essay published in Third World Quarterly was not only that it was mediocre; that it violated basic academic standards; and that it was rejected by the peer review system. It was that it appeared in this journal.

In the late 1970s, the Pakistani journalist Altaf Gauhar decided, while in his London exile, to set up a series of reviews and journals to stimulate debate around the Third World’s anti-imperialist agenda. In its first issue, in January 1979, the editor provided the context for this journal, to make the case for freedom for the states of Africa, Asia and Latin America, to revive a discussion of the New International Economic Order (1973) and to ensure that the voice from the Third World was not to be stifled. “Our concern is the Third World: we will speak for it, indeed, speak with its own voice,” wrote Gauhar.

The point of the journal, Gauhar wrote, was to encourage “an open-minded and sympathetic search for establishing an international order based on justice”. Early voices in the journal included Tanzania’s Julius Nyerere, Guyana’s Shridath Ramphal, Sri Lanka’s Gamini Corea. In the fourth issue, Gauhar wrote, “A class of British academics and politicians has been assiduously propagating the fiction that the British left behind a whole crop of western democratic institutions, planted and nurtured under prolonged British trusteeship, which the inept and inchoate natives failed to harvest.” This, Gauhar wrote, was fiction. The institutions that the British built in the colony “served imperial interests, commercial as well as strategic” and not the well-being of the people. This was the ethic of Third World Quarterly.

Over the years, changes have indeed come to the journal. It weathered the storm when Gauhar’s main sponsor – the Bank of Credit and Commerce International – collapsed after coming under suspicion of money laundering and other financial misdeeds. To some extent the journal was also able to stand above the fray when neo-liberal ideas swept through the academies of the world, demanding that public sector development be given over to private sector growth. There was stubbornness in the journal, a desire to continue to speak for the peoples of the Third World even as its elites had taken a different direction. Shahid Qadir, who took over from Altaf Gauhar, was the captain in these difficult times.

I joined the editorial board of the journal with enthusiasm, eager to help it move forward a new agenda for the peoples of the formerly colonised world. It was with sadness that I, and other members of the editorial board, decided to resign this when the company that owns Third World Quarterly, Taylor and Francis, declined to retract this objectionable essay – objectionable since it is against the values of the journal and because it failed the peer review process. Our resignation letter asks that the journal return to its values and develop an agenda for our present that is not set by the white supremacists and the colonialists. There are plenty of places for them to put forward their views. Third World Quarterly had a different mission. It needs to be true to its history.