The media likes to frame the limits of political struggle as between the Democratic and Republican parties, as if each side upholds a radically different political vision. However, in a number of key areas, leaders of both parties are happy to unite around an anti-worker agenda. Support for the military and an aggressive foreign policy is one such area.

On September 18, U.S. senators approved the National Defense Authorization Act (NDAA) of 2018. Donald Trump had proposed increasing the military budget by $54 billion. The Senate voted 89-9 to increase it by $37 billion more than Trump sought. In the words of the New York Times: “In a rare act of bipartisanship on Capitol Hill, the Senate passed a $700 billion defense policy bill on Monday that sets forth a muscular vision of America as a global power, with a Pentagon budget that far exceeds what President Trump has asked for.”

The NDAA calls for giving $640 billion to the Pentagon for its basic operations and another $60 billion for war operations in other countries, including Iraq, Syria, and Afghanistan. The House passed its own version of the bill, which included a smaller increase over Trump’s request as well as new initiatives such as the creation of a Space Corps not supported by the Senate. Thus, the House and Senate need to reconcile their differences before the bill goes to President Trump for his signature.

It is clear that Democratic Party opposition to Trump does not include opposition to U.S. militarism and imperialism. As Ajamu Baraka points out:

Opposition to Trump has been framed in ways that supports the agenda of the Democratic Party—but not the anti-war agenda. Therefore, anti-Trumpism does not include a position against war and U.S. imperialism.

When the Trump administration proposed what many saw as an obscene request for an additional $54 billion in military spending, we witnessed a momentary negative response from some liberal Democrats. The thinking was that this could be highlighted as yet another one of the supposedly demonic moves by the administration and it was added to the talking points for the Democrats. That was until 117 Democrats voted with Republicans in the House—including a majority of the Congressional Black Caucus—to not only accept the administration’s proposal, but to exceed it by $18 billion. By that point, the Democrats went silent on the issue.

It is important to keep in mind that, as William D. Hartung shows, “there are hundreds of billions of dollars in ‘defense’ spending that aren’t even counted in the Pentagon budget.” Hartung goes agency by agency to show the “hidden” spending. As he notes:

You might think that the most powerful weapons in the U.S. arsenal — nuclear warheads — would be paid for out of the Pentagon budget. And you would, of course, be wrong. The cost of researching, developing, maintaining, and “modernizing” the American arsenal of 6,800 nuclear warheads falls to an obscure agency located inside the Department of Energy, the National Nuclear Security Administration, or NNSA. It also works on naval nuclear reactors, pays for the environmental cleanup of nuclear weapons facilities, and funds the nation’s three nuclear weapons laboratories, at a total annual cost of more than $20 billion per year.

Hartung’s grand total, which includes, among other things, the costs of Homeland Security, foreign military aid, intelligence services, the Veterans Administration, and the interest on the debt generated by past spending on the military, is $1.09 Trillion. In short, our political leaders are far from forthcoming about the true size of our military spending.

Opponents of this huge military budget are right to stress how it greatly increases the dangers of war and the harm our military interventions do to people in other countries, but the costs of militarism are also felt by those living in the United States.

For example, ever escalating military budgets fund ever new and more deadly weapons of destruction, and much of the outdated equipment is sold to police departments, contributing to the militarization of our police and the growing use of force on domestic opponents of administration policies, the poor, and communities of color. As Lisa Wade explains:

In 1996, the federal government passed a law giving the military permission to donate excess equipment to local police departments. Starting in 1998, millions of dollars worth of equipment was transferred each year, as shown in the figure below. Then, after 9/11, there was a huge increase in transfers. In 2014, they amounted to the equivalent of 796.8 million dollars. 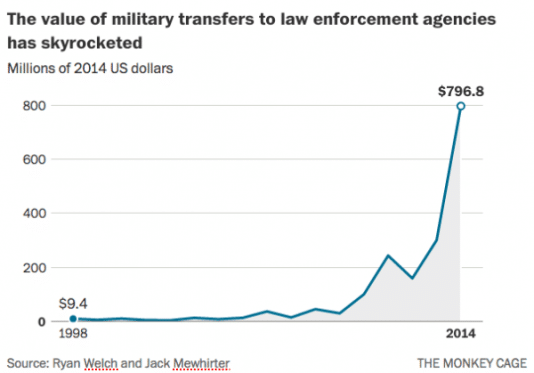 Those concerned about police violence worried that police officers in possession of military equipment would be more likely to use violence against civilians, and new research suggests that they’re right.

Political scientist Casey Delehanty and his colleagues compared the number of civilians killed by police with the monetary value of transferred military equipment across 455 counties in four states. Controlling for other factors (e.g., race, poverty, drug use), they found that killings rose along with increasing transfers. In the case of the county that received the largest transfer of military equipment, killings more than doubled.

Growing military spending also squeezes spending on vital domestic social services, including housing, health, education, and employment protections, as critical programs and agencies are starved for funds in the name of fiscal responsibility.

The nondefense discretionary budget is, as explained by the Center on Budget and Policy Priorities:

the main budget area that invests in the nation’s future productivity, supporting education, basic research, job training, and infrastructure. It also supports priorities such as providing housing and child care assistance to low- and moderate-income families, protecting against infectious diseases, enforcing laws that protect workers and consumers, and caring for national parks and other public lands. A significant share of this funding comes in the form of grants to state and local governments.

As we see below, nondefense discretionary appropriations have fallen dramatically in real terms and could potentially fall to a low of $516 billion if Congress does not waive the sequestration caps established in 2011. 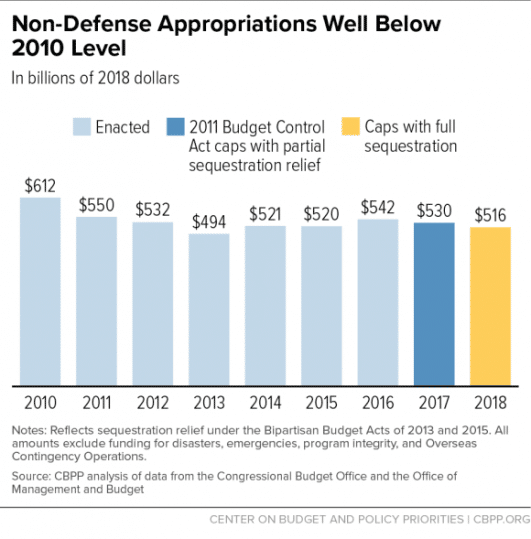 The decline is even more dramatic when measured relative to GDP. Under the caps and sequestration currently in place, nondefense spending in 2017 equaled 3.2 percent of GDP, just 0.1 percentage point above the lowest percentage on record going back to 1962. According to the Center on Budget and Policy Priorities, “That percentage will continue to fall if the caps and sequestration remain unchanged, equaling the previous record low of 3.1 percent in 2018 and then continuing to fall (see the figure below).” 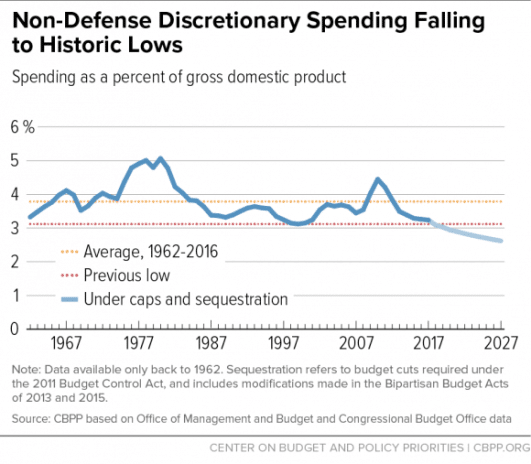 As the next figure shows, the proposed Trump budget would intensify the attack on federal domestic social programs and agencies. 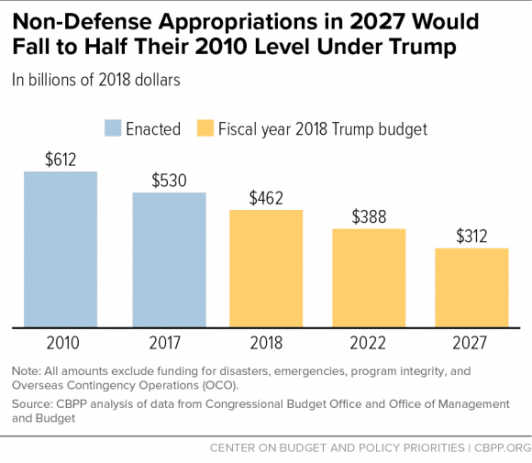 If approved, it “would take nondefense discretionary spending next year to its lowest level in at least six decades as a percentage of the economy and, by 2027, to its lowest on that basis since the Hoover Administration — possibly even earlier.” Of course, some categories of the proposed nondefense discretionary budget are slated for growth–veterans’ affairs and homeland security–which means that the squeeze on other programs would be worse than the aggregate numbers suggest.

No doubt the Democratic Party will mount a fierce struggle to resist the worst of Trump’s proposed cuts, and they are likely to succeed. But the important point is that the trend of militarizing our federal budget and society more generally will likely continue, a trend encouraged by past Democratic as well as Republican administrations.

If we are to advance our movement for social change, we need to do a better job of building a strong grassroots movement in opposition to militarism. Among other things, that requires us to do a better job communicating all the ways in which militarism sets us back, in particular the ways in which militarism promotes racism and social division, globalization and economic decay, and the deterioration of our environment and quality of life, as well as death abroad and at home, all in the interest of corporate profits. In other words, we have to find more effective ways of drawing together our various struggles for peace, jobs, and justice.