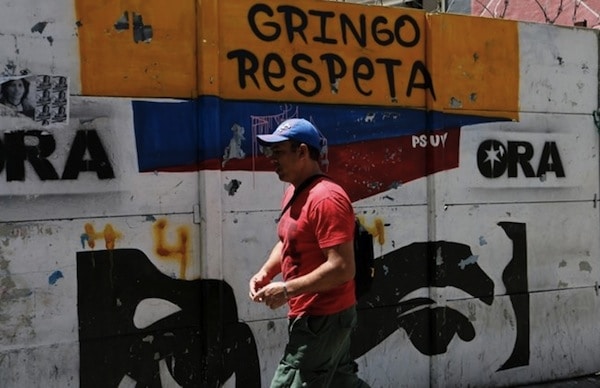 The importance of the U.S. Congress in the country’s foreign policy matters is well known, just as it is the center of decision-making on finance and trade issues in relation to the corporate sector in general and, specifically, the military-industrial sector. In the U.S. Congress, important actors from outside the political bureaucracy play a decisive role in terms of lobbying and moving things along so as to favor their interests. In earlier articles, we reported how ExxonMobil has spared no expense to affect the focus of U.S. government policy decisions on Venezuela.

The internal moves inside the U.S. Congress carried out with the objective of enacting a draft law to deepen aggressive sanctions against Venezuela has various aspects that complement President Trump’s latest executive order, the Department of Treasury sanctions and the dispatch of finance and supplies to the Venezuelan opposition.

As the various components of the U.S. offensive against Venezuela take shape, the U.S. political establishment is also planning their budget for 2018. It includes a line item they call “the situation in Venezuela” from a military point of view. On the webpage of the U.S. Congress, there is a proposed law called (National Defense Authorization Act for Fiscal Year 2018).

This proposed law was introduced in the House of Representatives last June 7th and approved on July 14th by a large majority. Last September 18th it was passed by the U.S. Senate, so it only remains to be signed by the President in the White House before becoming law.

The legislator who proposed this law was the Republican Mac Thornberry, sponsored by BAE Systems, Northrop Grumman Corporation and Lockheed Martin, according to Open Secrets, all of the major global contractors and pioneers in the composition of the U.S. military-industrial complex.

To facilitate discussion of this proposed budgetary law, two reports were produced justifying its approval. The first of these reports, made available in the House of Representatives last July 6, has a section on page 179 entitled specifically “Venezuela Security and Stability”. The report was presented by the House of Representatives Armed Services Committee and says this about Venezuela:

“The committee is concerned about the growing economic and political unrest occurring in the Bolivarian Republic of Venezuela under President Nicolas Maduro. With reports of famine, political uncertainty and corruption, a disintegrating economy, and undue violent government action against its citizens, the committee is concerned that instability in Venezuela could lead to a government collapse and failed state. In addition, this instability could result in portions of the Venezuelan population migrating to neighboring countries, including the Republic of Colombia, the Cooperative Republic of Guyana, the Republic of Peru, and the Federative Republic of Brazil, seeking humanitarian relief. The effects of a large-scale humanitarian crisis in the region could be catastrophic.

The committee is concerned about U.S. Government contingency planning if a collapse of the Venezuelan Government and economy occurs. Therefore, the committee directs the Secretary of Defense, in coordination with other Federal Government agencies and departments that the Secretary deems appropriate, to provide a briefing, which may be classified, to the House Committee on Armed Services not later than September 30, 2017, on U.S. Government contingency plans for a potential humanitarian and migration crisis in Venezuela if its Government and economy collapse, to include the Department of Defense’s roles and responsibilities and assets that would contribute to such plans.”

Three points should be made on this:

“(7) An assessment of military-to-military cooperation between Iran and foreign counties, including Cuba, North Korea, Pakistan, Sudan, Syria, Venezuela, and any other country designated by the Secretary of Defense with additional reference to cooperation and collaboration on the development of nuclear, biological, chemical, and advanced conventional weapons, weapon systems, and delivery vehicles.”.

This literally means that Congress is asking James Mattis, U.S. Secretary of Defense, to evaluate Venezuela from a military point of view and thus take into account that Venezuela forms part of an emerging bloc with Iran, Russia and China calling into question U.S. global hegemony.

Any study of Venezuela from a military point of view along with the evaluation, already mentioned, of possible “humanitarian aid” by the U.S. army, would take note of the inability of local forces to impose the scenario of armed insurrection that was attempted during the 120 days of aggressive demonstrations carried out by anti-Chavismo forces in various parts of Venezuela.

Lacking the necessary resources to impose that outcome, despite all the support the local opposition received from the United States and other regional actors, the U.S. Congress and the military junta now governing the U.S. from the White House are openly considering an intervention in Venezuela, certainly as regards the budgetary implications and operational terms. The sanctions and the financial boycott of Venezuela aim precisely at fabricating this scenario of “economic collapse”, paralyzing payments systems and cutting imports so as to justify the intervention “contingency”.

The profile of the report by the House of Representative’s Armed Services Committee matches the precedents that lead to the interventions in Iraq and Libya, both of which followed financial boycotts and penalties targeting the leadership of those countries as a pretext to “protect” the populations, suffering from U.S. sanctions, via outright bombardment

In the light of these Congressional moves, the “military option” which Trump has mentioned is far from being some crazy comment or out-of-place remark, but a carefully put together political plan, taking shape and methodically checking off its procedural stages.