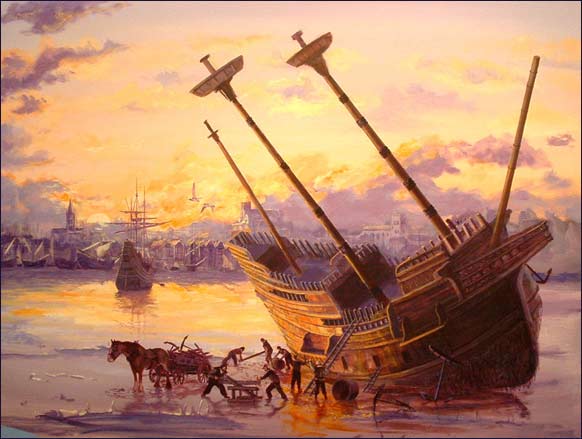 End of the Mayflower. Photo: MayflowerHistory.com

There’s no better way of forgetting something than by commemorating it.

In 1620 the Mayflower sailed from Plymouth, UK and in 2020 the 400-year anniversary of the sailing is being commemorated, centred in Plymouth, UK. This has involved the revamping of the local Mayflower Museum in 2015, the publication of a series of worksheets, and a writing competition for local Plymouth schools. Now the Mayflower 400 organizers have published the The Mayflower 400 Scheme of Work.

This scheme has been prepared for Plymouth schools and follows several years of planning of a trans-Atlantic international commemoration of the sailing of the Mayflower in 1620. Though this planning has emphasised the education role of telling ‘the story of the Mayflower’ in schools and elsewhere, the focus has been primarily tourism.

Education and history are framed to service a tourist attraction, emphasizing the details of the 1620 journey and the make-up of the passengers rather than its colonial character and context. The scheme of work centres on the ‘Separatist’ Puritan half of the Mayflower passengers. Consequently the plan of study it details relegates the story of the Indigenous Nations of North America to a subsidiary place and sanitises the Mayflower Story. The Plymouth UK Mayflower Museum, revamped in 2015, and the Mayflower 400 website’s education section, are currently the principal publicly available education materials for the Mayflower commemorations.

Opposition to the Mayflower 400’s promotion of a sanitised version of the ‘Mayflower Story’ is needed NOW!  By 2019 it could be tried, tested and on every school’s timetable across all 11 of the partner ‘Mayflower Destination’ towns/cities in the UK, and possibly beyond.

Indigenous American organizations are currently campaigning over water and land rights and there are ongoing campaigns targeting commemorations, such as Columbus Day. Indeed, the history of recent related commemorations could provide lessons for the Mayflower ones. Consequently, it is necessary to ask the following questions of the planners of the Mayflower 400 commemoration about the creation of NEW or revised education materials which do not sanitize the Mayflower story:

As education planning is continuing to take place you may wish to raise the Mayflower 400 Scheme of Work and other matters directly with the Mayflower 400 organisation. Firstly, below we have prepared a very brief model letter which we hope you can draw on to write your own letter. See below for the emails of Mayflower 400 organizers and please make sure to send us copies of any emails/ etc. you send!!

I/We are writing to you to ask you to withdraw ‘The Mayflower 400 Scheme of Work’, recently published and currently displayed on your website.  I/We understand that it is planned to promote this sanitised version of the “Mayflower Story” in schools and other education institutions via your 11 core destinations in England and with wider local, national and international partners. The scheme misleadingly centres on the ‘Separatist’ Puritan half of the Mayflower passengers, and, more importantly, the plan of study it details relegates the story of the Indigenous Nations of North America to a subsidiary place and sanitises colonialism and slavery. The African-American part of the Mayflower Story is not included at all, andthe Indigenous Nations of North America are included only to provide background for some events, themes and features to be studied for comparison purposes. This will continue the ignominious tradition of distortion and neglect of Indigenous and African-American accounts of their histories. Moreover, the promotion of these views of English colonization and American history are happening at a time when both African and Indigenous Americans are being obliged to campaign over rights that are being denied them: e.g. civil, land and water rights.

Secondly, we would invite you to review our website, and that of Mayflower 400, and raise “The Mayflower 400 Scheme of Work” and related issues with individuals or organisations you feel may be concerned about the risk it poses for bringing historical education into disrepute. Leaflets presenting a critique of Mayflower 400’s present education project, and various commentaries are available via this website.

Thirdly, we are hoping to create a network of contacts to promote a campaign over the sanitisation of the Mayflower Story. We invite you to become part of this network. Please contact us via this website or out twitter account @MayflowerM1620.