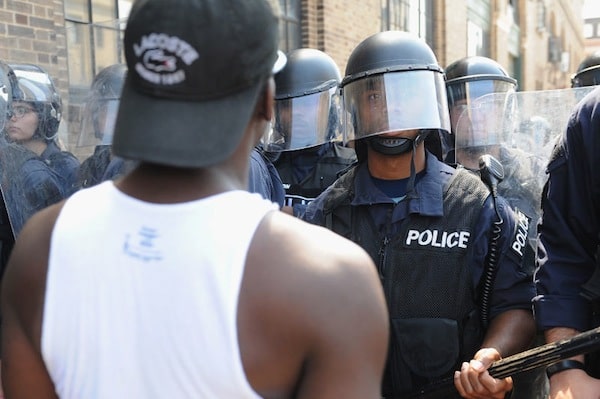 According to a new report from Foreign Policy magazine, this is the dangerous, racially motivated movement the FBI counterterrorism unit warned about in a report back in August. The FBI report was released on Aug. 3—just nine days before a white supremacist rally in Charlottesville, Va., turned deadly.

Foreign Policy obtained the report, which is marked for official use only. The document warns that “black identity extremists” pose a growing threat to law enforcement. In a particularly cruel and unfounded assertion, the FBI claims that police attacks on black Americans could spur “premeditated, retaliatory lethal violence” against the police.

The August 2014 shooting of Michael Brown in Ferguson, Missouri, was the catalyst for widespread anger and violence, the FBI report says, concluding that continued “alleged” police abuses have fueled more violence.

“The FBI assesses it is very likely incidents of alleged police abuse against African Americans since then have continued to feed the resurgence in ideologically motivated, violent criminal activity within the BIE movement,” the report states.

Right. Because the response to Michael Brown’s death was the first instance of black people voicing outrage about police brutality.

While the report doesn’t specifically call out Black Lives Matter, the group certainly is the subtext of the document. As Foreign Policy rightly notes, 168 black Americans have been shot and killed by the police in 2017 alone. Law enforcement has killed 748 people in all this year so far.

That’s 748 lives in less than 10 months, nearly a quarter of them black.

Meanwhile, the report lists six total acts of premeditated violence against officers, including the shooting death of Dallas police officers at a BLM rally in July 2016. The shooter, Micah Johnson, wasn’t affiliated with BLM but was reportedly “influenced by BIE ideology,” based on his journals and statements to police, according to the FBI report.

The move is the latest iteration of a long tradition of the FBI targeting and tracking black activists. The most famous example is COINTELPRO, which was created in 1956 with the explicit intent to “expose, disrupt, misdirect, discredit, or otherwise neutralize the activities of black nationalist[s],” according to the FBI’s own documents. Then, as now, the people the feds are actually targeting were mostly activists fighting to advance racial equality.

Or, at the very least, stop the government from ceaselessly, and with impunity, killing black people and people of color.

The FBI did release a report earlier this year that warned that the white supremacist movement “likely will continue to pose a threat of lethal violence over the next year.” However, the new guidance on “black identity extremists” draws a dangerous equivocation between a movement that is seeing a visible resurgence and one that seems completely conjured by the FBI.

According to Foreign Policy, this new guidance has raised eyebrows among the intelligence community, with one former official expressing shock at the report’s contents.

“This is a new umbrella designation that has no basis,” the former official told FP. “There are civil rights and privacy issues all over this.”