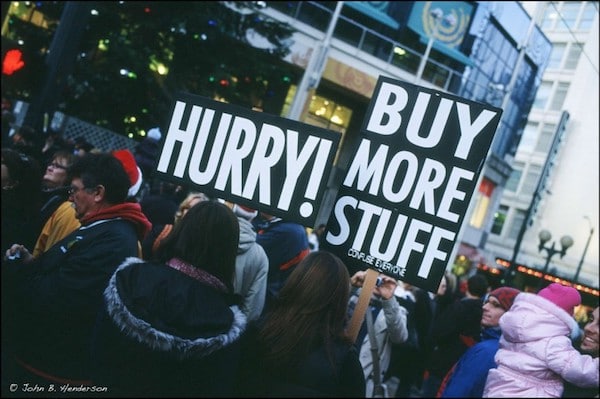 Life as a consumer is very different to what we’re told.

We’re sold an image of smash avo on toast; of beautiful, thin, white women laughing at salads; of right-angled, rugged heroes cruising on highways in their brand-new Holdens.

It looks so good, so inviting, so perfect.

But we know that there’s another picture too. Of turtles dying after ingesting plastic. Of marine life being deafened by oil drilling. Of climate change.

No one wants this. It doesn’t look good on Instagram. So the same people who sell you solutions for your ageing skin also sell you the solution to all sorts of environmental crises.

If you want clean air, then stop buying the affordable petrol car we sell you and how about this snazzy, marked-up electric one instead? (Just, whatever you do, don’t take the bus!) Want clean beaches, then why on earth accept all this plastic we shove in your face every time you visit the supermarket? What, you want the beaches to die?

While you tie yourself in knots about your environmental impact, as you’re umming and ahhing about the choices you’re railroaded into making, the people selling you the plastic are just making money.

They literally make trash. It gets used once, then it goes into the ocean or landfill. They make the money. The environment pays the price.

But it’s worse than that.

Former UK Prime Minister, Margaret Thatcher, the High Priestess of neoliberal economics, once said of her agenda, “Economics are the method: the object is to change the soul”.

What she meant by this was that by attacking the collective institutions on which the UK was built – the unions, the railways, the utilities – in the name of economics, she can change fundamentally how we see ourselves. Less as a collective citizenry, more as individuals, as consumers. “There’s no such thing as society” – another of her zingers.

Her ideology matched the US President’s, Ronald Reagan. Together, they shaped the global consensus on economics, which reached a small island at the bottom of the world, with which you might be familiar.

Here’s the T, when we individualise environmental crisis, when we make it all about our behaviour, we lose sight of the bigger picture. We lose sight of the systemic problems that sees companies make huge profits at the expense of the living world. And we think that our own “failings” – our lack of money, beautiful products or six-pack abs – are our own fault. We don’t see the system around us that lets some people feast while the rest of us fight for the crumbs. (Or perhaps more accurately, those feasting are doing so on the backs off those of us fighting for crumbs.)

But it doesn’t have to be this way. If we start viewing ourselves as a collective again, as citizens, we empower ourselves like never before.

We can re-write the rules on this horrible system that binds us into these destructive choices. Together, we can force companies to clean up the pollution they create. Together, we can design a system that works for people and planet, and not just Big Business and the tiny fraction of people who own them.

We could create a world where all of us – animals, plants and people – can thrive like never before. This isn’t utopian fantasy. This is real. We have the know-how, we just need the will.

But to do that, we need to start punching upwards. Judging others for what they do and don’t buy divides and alienates us. It’s time for a new narrative, where we work together for the world we all want.

This is already happening. The world is getting better because people are coming together to make it so.

When we stand together, we always win.