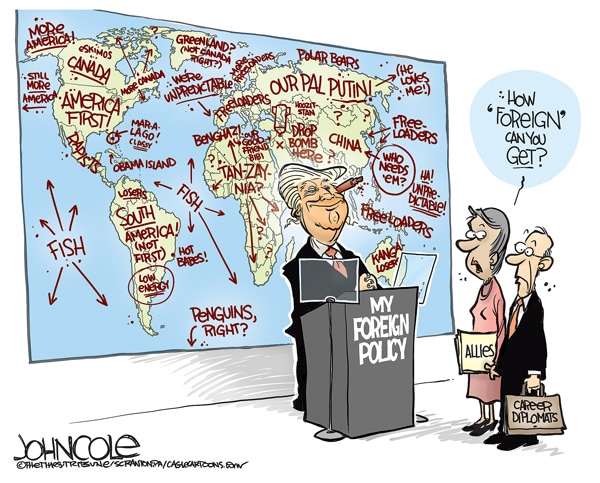 It is an understatement to say that relations between the U.S. and North Korea are very tense—the U.S. government continues to threaten to further tighten economic sanctions on North Korea and launch a military attack to destroy the country’s missiles and nuclear weapons infrastructure. And the North for its part has said it would respond to any attack with its own strikes against U.S. bases in the region and even the U.S. itself.

Making matters worse are Trump’s personal attacks on Kim Jong Un, the head of the North Korean government. And as an indicator of how much tensions have ramped up, Kim himself spoke, responding in kind to Trump. It is very rare, in fact this may be the first time, that a North Korean leader has personally responded to comments made by another government; usually the North Korean position is conveyed by a government official or their news service.

This is obviously not a good situation, but it is also important to realize that what is happening now is not new. The U.S. began conducting war games with South Korean forces directed against the North in 1976 and it was not long before those included simulated nuclear attacks against the North, and that was before the North had any nuclear weapons. In 1994, President Bill Clinton came very close to launching a military attack on North Korea. In 2002, President Bush talked about implementing a naval blockade of North Korea and seizing its ships, an act of war, and also announced the adoption of a new National Security Strategy under which the U.S. announced its right to take pre-emptive military action against any nation that it felt posed a threat to U.S. interests, with North Korea said to be at or near the top of the list. Since 2013, the U.S. has conducted annual war games involving planning for preemptive attacks on North Korean targets that include the use of nuclear weapons and what the military calls the decapitation of the North Korean leadership.

The point here is not just that we have a history of threatening war, including nuclear attack, against the DPRK, but that it is a bipartisan history, involving both Democratic and Republican administrations.

Although we have thankfully so far averted a new Korean war, the cycle of belligerency and threat making on both sides is intensifying, and it is always possible that a miscalculation could trigger the start of military actions. However, and this is very important, even if war is averted, the high level of tension between the U.S. and North Korea itself comes with unacceptably high costs.

President Trump is continuing the strategy of past administrations of responding to every North Korean missile launch or nuclear test with new sanctions. These sanctions are cutting deep, hurting North Korean living conditions. It is collective punishment of the entire North Korean population. As Gregory Elich explains, the U.S. is already at war with North Korea, “doing so through non-military means, with the aim of inducing economic collapse.”

For example: UN resolution 2371, passed August 5, 2017, aims to block North Korea “from exporting coal, iron, iron ore, lead, lead ore, and seafood, all key commodities in the nation’s international trade. The resolution also banned countries from opening new or expanding existing joint ventures with the DPRK.” UN resolution 2375, passed September 11, 2017, is designed to further limit “North Korea’s ability to engage in international trade by barring the export of textiles. It is estimated that together, the sanctions may well eliminate 90 percent of the DPRK’s export earnings. . . . The September resolution also adversely impacts the livelihoods of North Korea’s overseas workers, who will not be allowed to renew their contracts once they expire.”

The social costs of U.S. policy are not limited to North Koreans, although they bear the greatest burden. The tensions generated by the escalating US-NK standoff are helping to fuel greater military spending and militarization in Japan and China, as well as the US. This is a dynamic that strengthens the political power and influence of dangerous rightwing forces in all these countries. And in South Korea, these tensions are already at work undermining democratic possibilities, as labor leaders are jailed, civil rights curtailed, and progressive political parties disbanded in the name of national security.

So, it is not enough for us to just work to oppose outright military conflict. We need to change the dynamics driving U.S. and North Korean relations. And, there is no mystery about the best way to achieve this end: the U.S. needs to accept DPRK offers for direct negotiations to end the state of hostility between the two countries. Unfortunately, there is no shortcut to forcing the U.S. to the negotiating table. It requires building a strong popular movement that can cut through the myths and distortions that the U.S. media and government promote in defense of current policy. For an example of some of what we must overcome, see “The need for a new U.S. foreign policy towards North Korea.”

Cutting through the myths and distortions also requires that we hear progressive voices from South Korea. Jang Jinsook, Director of Planning of the Minjung Party of South Korea, a new progressive party that will formally launch on October 15, is one such voice. What follows is a short excerpt from her talk titled “Honoring The Candlelight Revolution In A Time Of Looming War In Korea” that was given at the People’s Congress of Resistance at Howard University in Washington, D.C., in mid-September:

Military tension between North and South Korea has always been headline news in Korea. Every year in March and August, when the U.S. and South Korean militaries conduct their massive military exercises, tensions escalate, and each time, people in Korea experience renewed fear: “Maybe this time, it will really lead to war.”

The U.S. and South Korean militaries say these are routine exercises, but they deploy weapons of mass destruction, rehearse the occupation of North Korea, and simulate real-war scenarios as well as the decapitation of the North Korean leadership. North Korea has strongly objected to these exercises, but this has been going on for a long time.

The Korean peninsula has always lived with the imminent threat of war. But until recently, it never made headline news in the United States.

I’ve been seeing the headlines in U.S. news in the few days I’ve been here: “Kim Jong-un, North Korea, missiles….” This ironically pleased me because finally what was once considered only a problem of the Korean peninsula has now become a U.S. problem. Now that the war threats are acute, it has finally become headline news in the United States.

It is the United States that has conducted the greatest number of nuclear tests, possesses the greatest nuclear arsenal, and has actually dropped atomic bombs on a civilian population. North Korea is in the stage of developing and testing nuclear weapons, opposes U.S. aggression and sanctions, and demands a peace treaty. Which party is the real threat?

For the first time in a long time, defending the U.S. mainland from the threat of nuclear war has become a priority policy agenda for the U.S. government. Of course, news about North Korea must be distressing for the people who live in the United States.

But it is the U.S. government that has created this situation, and the solution is quite simple. It is to realize a peace agreement between the United States and North Korea.

The more the United States piles on sanctions against North Korea through the UN, the more North Korea will become hostile and the two countries will inch closer to war. And the more this crisis intensifies, the U.S. government will sell more weapons to South Korea and increasingly meddle in South Korea’s internal affairs.

For the past sixty years, since the Korean War and the 1953 signing of the Mutual Defense Treaty between South Korea and the United States, South Korea has been a military outpost for the United States. The so-called U.S.-ROK alliance seriously undermines the sovereignty of South Korea. The forced deployment of the U.S. THAAD missile defense system is a case in point.

We demand the following:

You can read her entire speech and learn more about the Minjung Party of South Korea here, on the Korea Policy Institute website.