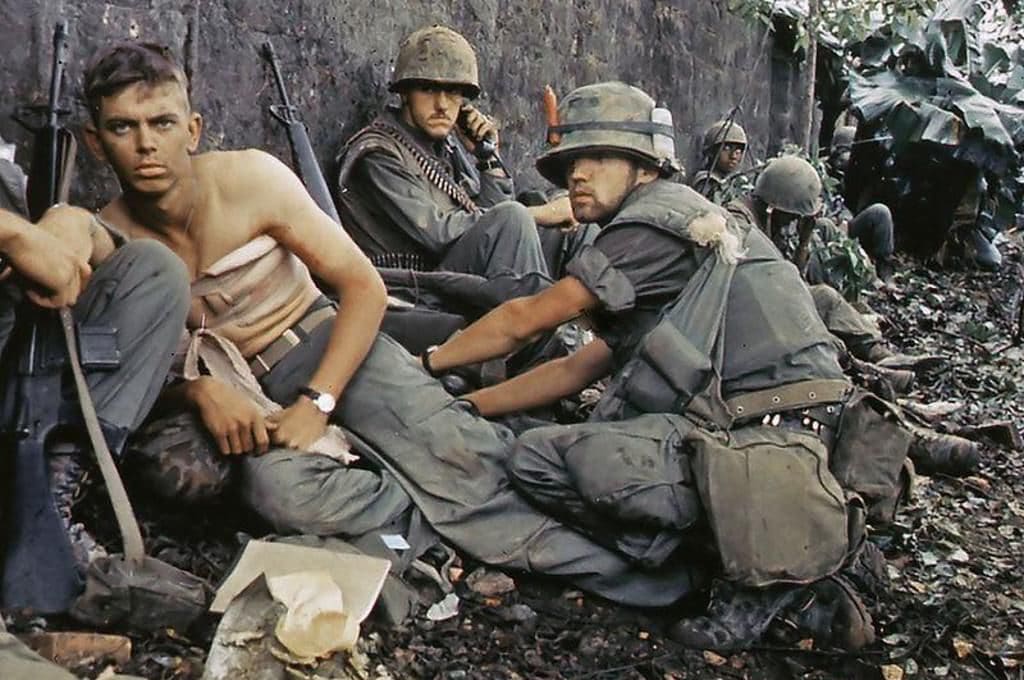 A Marine receives medical treatment in the field in a moment from Ken Burns and Lynn Novick’s 10-episode documentary, “The Vietnam War,” now on Blu-ray and DVD. PBS (courtesy).

Since September 17th, when the series began, a lot of Americans have been watching the long-awaited The Vietnam War documentary by Ken Burns and Lynn Novick.  It is powerful and moving, disturbing, enlightening, and challenging.

That does not accord with my own experiences.  I returned to the US from Asia twice in full military uniform, March 1968 and June 1969, both times passing through San Francisco airport—the heart of hippiedom—on my way home to Philadelphia.  No one ever accosted me.

In May 1970, after the killings at Kent State, I joined the antiwar movement, but I did not spit on myself or call myself “baby killer.”  Moreover, I never saw anyone else around me abusing soldiers or veterans.

Vietnam War veteran Jerry Lembcke reinforces my anecdotal evidence in his book The Spitting Image: Myth, Memory, and the Legacy of Vietnam (NYU Press, 2000), which thoroughly investigates these stories of abuse.

I, however, do have a true “spat-upon veteran story.”  It goes like this:

The day after I came home from Vietnam in early March 1968, I took the money I’d saved in those 13 months and went to West German Motors in Ft. Washington, PA, and bought a brand new Volkswagen. VW Beetle.  Red with black interior.

Only I didn’t buy it.  I had to give the money to my father, and he bought it because I was not legally old enough to buy a car.  The owner’s card remained in my father’s name for the next year and a half until I turned 21, which was the age of majority then in Pennsylvania.

The day after that, I went to McKeever Insurance, in my home town of Perkasie, PA, to get insurance for my car.  But Mrs. McKeever told me I couldn’t get a policy in my name.  I would have to be carried on my parents’ policy as a dependent child.

Understand what I’m saying here:  I had just spent 13 months fighting in Vietnam.  I was a combat-wounded Marine Corps sergeant, but the state of Pennsylvania recognized me only as a child dependent on my parents.

Let me say that again: I had just spent 13 months fighting in Vietnam.  I was a combat-wounded Marine Corps sergeant, but the state of Pennsylvania recognized me only as a dependent child.

Indeed, I could not even legally buy a beer in my own hometown.

And when I began college in the fall of 1969, unlike the WWII and Korean War veterans who received full college tuition plus monthly living expenses in recognition of their service, I got $135 a month for every month I spent in the Marines, which was hardly enough to buy my books and cover the cost of my dorm room; it didn’t begin to cover my tuition.

You want to talk about abuse and disrespect?  I was indeed abused and disrespected when I came home from the Vietnam War, but it wasn’t the antiwar people who were abusing and disrespecting me.

Bill Ehrhart, a Marine Corps veteran of the American War in Vietnam, is a major figure in The Vietnam War, and author of numerous books, including Vietnam-Perkasie: A Combat Marine Memoir.