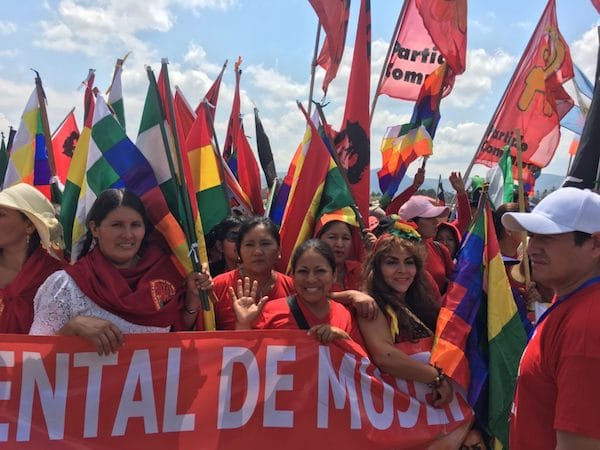 Evo Morales: “Che Didn’t Invade Colombia”, “Being A Guerrilla Is Not A Crime” Source: Resumen Latinoamericano / The Dawn News / October 9, 2017.

Last October 8, 50 years after the murder of Che Guevara, thousands of people who vindicate his legacy of struggle arrived in La Higuera, Vallegrande, where the Argentine-Cuban guerrilla was captured and later assassinated.

Embraces charged with emotion were exchanged by some of Che’s  former comrades, like Cuban heroes Pombo and Urbano. Guevara’s slogans were repeated and chanted. Evo Morales made a floral tribute to Che and all of the fallen combatants. Among them, one of the most remembered was Tamara Burke, alias Tania, who was murdered along with other guerrillas.

Hundreds of youths of social and popular organizations of the continent were present at La Higuera, committed to Che’s values and willing to continue his legacy.

There were also supporters of the Bolivian ELN, who carried the organization’s flags proving that the struggle continues.

Many of the attendees visited the small rural school where Che and other combatants were taken after being captured by the Bolivian army, until a CIA murderer executed him.

The homage to Commander Ernesto Che Guevara in Bolivia ended with a multitudinous celebration filled with combativity. Two columns of people arrived from different points of the country to the old airport of Vallegrande. Many of them were peasant men and women wearing their typical outfits, carrying whipala flags flying in the wind and banners reminding of the 50th anniversary of Che’s murder. Actually, Che was present throughout the week among inhabitants of Vallegrande, since his face adorned many walls and windows of the town where his lifeless body was brought half a century ago.

The central act of closure featured peasant leaders, miners, Argentine intellectual Atilio Borón (who spoke in the name of social and popular movements of the continent), commander and current Vice President of the Cuban Revolution Ramiro Valdéz, a representative of the Sandinista government and lastly President  of Bolivia Evo Morales.

Evo said that the best homage to Commander Che Guevara is to continue his anti-imperialist struggle and proposed ten ways to build a better, more equitative world, in line with the beliefs of the guerrilla leader.

“The best homage is to continue the anti-imperialist struggle (…) today more than ever Che is necessary, he is the most alive, he projects with more strength into the future”, the Bolivian head of State said.

Evo Morales also denied that Che Guevara coming to Bolivia was an “invasion”, and that honoring his memory is “treason against the motherland”, as members of the opposition stated.

“It is not treason to remember those who wanted to liberate the motherland”, he said in Vallegrande, where the rests of the legendary guerrilla were exhumed in July 1997, three decades after being executed and buried in a common pit.

“We need to say that this was not an invasion, since 26 of the 50 guerrilla who fought alongside Che for the liberation of our country were Bolivians”, Morales said to hundreds of peasants, indigenous people, workers, students, youth, artists and intellectuals form many countries who arrived in Vallegrande.

“Being a guerrilla is not a crime”

One of the most meaningful parts of Evo’s speech was his emphatic defense of Guevara’s struggle, subtly answering to the campaign that the Bolivian right wing has been promoting over the last few days. “Being a guerrilla is not a crime”, Evo said, and based his argument on the fact that the continent’s struggles for independence were fought between guerrillas and colonialists in the 19th century. “They called those who fought the oppressors with stones or rudimentary arms ‘guerrillas’”, and he added: “all of us who have fought against imperialists in our countries are guerrillas”.

“Brothers and sisters of the Big Motherland”, Evo continued, “this day is one of the most important days in our history, because we commemorate the 50th anniversary since Commander Ernesto Che Guevara passed away (…). His face, his name, his life and his ideals continue to be a banner in the struggle against all forms of oppression, of exploitation, and of exclusion—that’s what we feel when we raise our fists and we say with all the might of our voice: ‘Victory or death!’”.