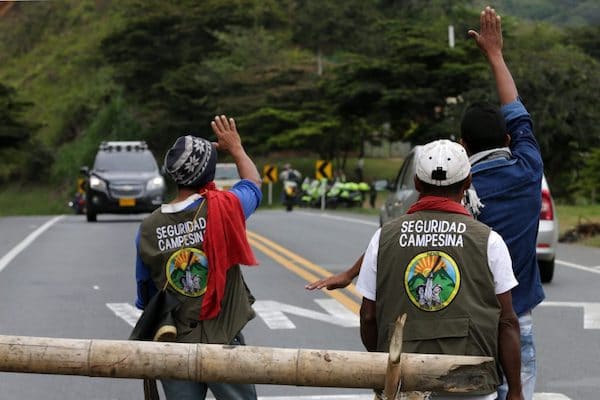 Colombia is in an environment of almost permanent mobilization of social and political movements due to the government’s failure to follow through on the agreements it has made in different spaces of negotiation, its continued campaign of violence against members of  social movements, and its silence in the face of renewed paramilitary violence in the territories of Colombia.

The social movement Marcha Patriotica has been mobilizing in a national strike for the last 9 days in key regions like Cauca and Catatumbo and up until now has received no firm response or show of will from the National Government. The National Indigenous Organization of Colombia entered into a Minga of Resistance on monday October 30, 2017 and reported that there are over 100,000 indigenous people mobilized across the country. Below is a communique from the organization reporting its motives for the mobilization.

At the same time, the repression from the National Government has only increased. Every day more social leaders and demobilized members of the FARC are assassinated and the organizations involved in the mobilizations have reported constant attacks and intimidation from the law force and its repressive anti-riot squad -ESMAD-. Despite the repression, the organizations maintain their mobilizations in the streets and continue to demand that the National Government follow through on its agreements.

Beginning on October 30, 2017, more than 100 thousand indigenous people from Cauca, Huila, Valle del Cauca, Nariño, Putumayo, Tolima and the Association of Community Councils from the North of Cauca –ACONC– will rise up with dignity to demand respect for the territory and fulfillment of the agreements.

The indigenous people and authorities, have called a meeting with the National Government lead by President Juan Manuel Santos on November 1 of the current year, in the sector Monterilla, in the Caldono Reservation, Sa’th Tama Kiwe territory so keep their word with the indigenous movement of Cauca, with other indigenous regions, and social sectors like the afro descendants of the country. It is evident that in the indigenous, afro descendant and peasant territories they are in a critical situation due to the high level of infringement on collective and human rights of the communities in the territories.

The selective assassinations, threats, and persecution to the traditional authorities, leaders, indigenous organizations and social sectors, do not stop in the territories by paramilitary groups like “Aguilas Negras” (Black Hawks). On October 26, 2017 a pamphlet began to circulate on social media that directly accuses indigenous leaders of Cauca of being part of the guerrilla or the dissenting faction of the FARC. The death threats are directed towards AIDA QUILCUÉ VIVAS of the indigenous movement of Cauca that is currently representing CRIC as the human rights representative in the National Indigenous Organization of Colombia -ONIC-, FELICIANO VALENCIA indigenous nasa leader from the north of Cauca, ALVEIRO CAMAÑO indigenous leader of Cauca, FABIÁN MULCUÉ indigenous leader of Cauca, HERMES PETE traditional authority of the Belalcazar reservation, in Páez municipality, Cauca who suffered an assassination attempt on October 13, 2017. In the pamphlet they are all declared military targets for the sole reason of defending the fundamental rights of the indigenous people of Cauca and Colombia.

Due to these terrible incidents the indigenous community will be demanding that the National Government provide guarantees for the protection of indigenous authorities and leaders, like essential mechanisms of protection to people that are in a situation of physical and cultural extermination as it is mentioned in the Auto 004 Plan of Protection.

The mandate of the XV Congress of the CRIC held in Rioblanco, Sotará in June of this year, the indigenous communities and people declared that “we do not want more agreements, it’s time for them to be fulfilled” and in the Board of Directors meeting of CRIC held on October 2 and 3 of this year, the 125 authorities ratified the decision, and that is why we are mobilizing in an indefinite way along with other indigenous regions and afro descendant communities in the country so that the National Government keeps its word with concrete actions in the territories.

In the Resistance Minga for the territory, dignity and the fulfilling of the agreements, we will come together as men, women, students, youth, elderly, indigenous security, sons and daughters of the earth, everyone and each one with a stick (the traditional and symbolic tool of the autonomous indigenous security, guardia indigena) and the red and green flag, with pain and anger for our fallen comrades taken by the hands of the government for the sole reason of defending our land, our platform of struggle and the principles of unity, land, culture and autonomy. We are coming together to defend life, mother earth and every being that inhabits this earth.

We sing songs, chants, we will dance showing that in our communities there is no more fear and that the love for life, is what brings us together today in the struggle and resistance. From today Sunday October 29 of this year, the indigenous people, communities and authorities, will be traversing roads and highways to come together in the minga that started October 30 in Southwest Colombia.

Tomorrow there will be a press conference from  8:30 in the central offices of the Regional Indigenous Council of Cauca -CRIC- where the Senior Council of CRIC will speak about the reasons behind these days of mobilization and demands of following through of the agreements by the National Government.

We call on you to participate in this great Minga of Resistance for the territory, dignity and fulfillment of the agreements. Lets join together in one voice, one song of dignity.