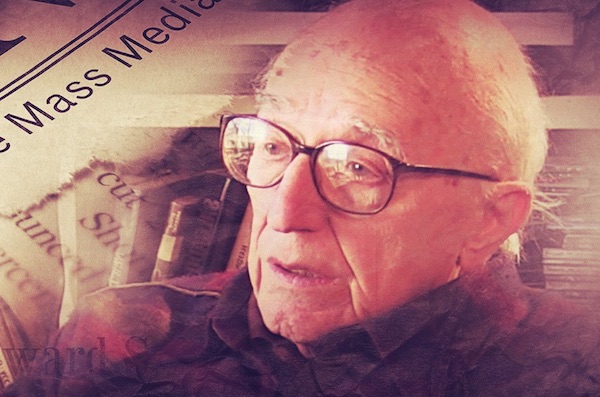 Edward S. Herman has sadly passed away. He was one of the great critical voices speaking out while the media grew steadily into the conglomerated machine it is today. It is testament to his work that his ideas transcend generations. While technology has moved on, the problems inherent to the media have remained, and if anything become further entrenched.

The book he co-authored with Noahm Chomsky, Manufacturing Consent is a towering classic and one of the major inspirations for Media Sifter. In fact we always keep a copy nearby. Our fact-based news platform on the blockchain is designed with Ed’s ideals in mind; to help people see through the hidden agendas and bias that the mainstream media has become riddled with.

In his last article written in the Monthly Review, he took the media to task once more for their fixation on the rise of so-called ‘fake news’. He calls out the New York Times and other mainstream press outlets for their own brand of misinformation, one that has been a consistent and pervasive element, rather than a recent phenomenon fueled by the internet:

These publications take it as an obvious truth that what they provide is straightforward, unbiased, fact-based reporting. They do offer such news, but they also provide a steady flow of their own varied forms of fake news, often by disseminating false or misleading information supplied to them by the national security state, other branches of government, and sites of corporate power.

The article is a masterclass in media research, reaching back to 1917 to trace a century of falsehoods and selective facts written about Russia by the mainstream press in the United States. From the ‘disastrous’ coverage of the Bolshevik revolution, through to the propaganda of the cold-war and the current ‘Putin era’, Ed does what he did best; challenging the mainstream narrative with wit and guile.

While Ed was not infallible, the piece is rich in evidence, with 32 sources and references to support his assertions, allowing you to do due diligence as a reader. This is type of evidence-rich journalism is unfortunately a rarity, because as Ed and Noahm outline in their Five Filters much of the media is no longer interested in investigation.

Our world of real-time publishing, churnalism, and fake news is the dramatic end-game emerging from the fundamental conditions that have plagued the media industry for decades. When profit is the overarching motive, yet only achievable through advertising, the emphasis on editorial quality is quickly surrendered, superseded by business motives. News outlets become media conglomerates. Journalists are rewards for clicks and likes, rather than the quality of their investigation. This model not only represents a threat to the news industry, but to society itself.

We want to change the rules of the game

Our platform will bring evidence back to the news. Anyone with credibility, who can contribute validated information to the community, will earn rewards. Rather than following fads, journalists can focus on their craft. Post-publication engagement will shift from the below the fold mania of partisan comment threads, to an inclusive in-line space where facts take precedence.

We will shortly be releasing our white paper, outlining in great detail how we intend to do this. In the mean-time we leave you with the words of Ed, taken from Manufacturing Consent.

The organization and self-education of groups in the community and workplace, and their networking and activism, continue to be the fundamental elements in steps toward the democratization of our social life and any meaningful social change. Only to the extent that such developments succeed can we hope to see media that are free and independent.