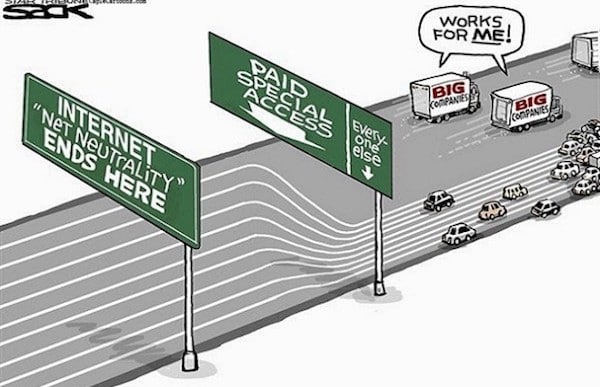 Net neutrality is the basic principle that Internet service providers and governments who regulate most of the Internet must treat all data on the Internet the same. This means not discriminating or charging differently according to user, content, website, platform, application, type of equipment used, or method of communication. This prevents internet service providers from charging money for specific websites and online content and intentionally blocking or slowing down the internet. In short, although access to internet remains deeply uneven, net neutrality is a key part in making it a little more equal.

The plan by the FCC to repeal net neutrality is a terrifying prospect, one that will put more power in the hands of telecom companies like Verizon and AT&T to limit and monitor what type of content people have access to on the internet and who has access to this content. This of course means that the working class and historically marginalized communities who have found in the internet new spaces to share, learn and connect their knowledge, history and realities that have traditionally been locked out and silenced.

Below we share two different articles that analyze the impact that the repeal of net neutrality could have on black people and on women.

by Malkia Cyril / Source: The Root

From #BlackGirlsCode and #BlackMenSmile to #BlackLivesMatter and #BlackTwitter, the black internet is part of the 21st-century movement for dignity, rights and freedom—and it’s under attack.

The draft order proposes to eliminate key civil rights protections codified by former President Barack Obama’s FCC to prevent discrimination from internet service providers, despite the fact that our current net neutrality rules were demanded by more than 4 million members of the public, and almost 80 percent of Americans (pdf) want to preserve the FCC’s current open internet rules, including 73 percent of Republicans.

FCC Commissioner Mignon Clyburn, the only black voice on the five-member commission, and a champion for digital civil rights, said, “Net neutrality is the First Amendment for the internet” at a recent public hearing held in Atlanta by the racial-justice coalition Voices for Internet Freedom.

They’re both exactly right, which may give black internet users some insight into why Trump’s FCC wants these rules gone, with a quickness.

The bright-line rules passed by the FCC in 2015 currently prohibit blocking, throttling and paid prioritization—all things that would make your internet experience slower, more expensive and more censored than it is right now. Under the current rules, internet service providers can’t “unreasonably interfere with or unreasonably disadvantage” people’s ability to access and use the lawful content, applications, services or devices of their choosing.

Pai’s proposed repeal will be voted on during the FCC’s next meeting on Dec. 14, and it could change all of that. Besides silencing black voices, the repeal of net neutrality proposed by Trump’s FCC includes plans to remove Title II classification of broadband ISPs. Title II gives the FCC the authority to treat companies like AT&T, Comcast and Verizon as common carriers of internet content, like a utility company.

Under the current rules, ISPs like Comcast are forced to handle all traffic equally. If Pai repeals net neutrality, Comcast could use a pay-for-play model to charge higher fees to internet users in exchange for preferential treatment, which could affect how fast or slow internet content loads for you. It’s exactly because net neutrality prevents fast and slow lanes that comedians like Bell and artists like Issa Rae, who launched her career with a web series, have been able to grow audiences like wildfire. A pay-for-play business model would stunt the growth of the black internet.

If Ajit Pai has his way and the rules he just proposed pass, we may lose the internet as a resource to build black political power, economic independence and social influence. We can’t let that happen.

Whether through the treatment of ESPN host Jemele Hill, journalist April Ryan, or former NFL quarterback and activist Colin Kaepernick, this administration has made it clear that “making America great again” means making black people second-class citizens—again. Using Jim Crow-era bully tactics, the president has tried to make an example of high-profile members of the black community who have used their platform to advance the cause of civil rights or raise their voice in protest. Despite being a conduit for presidential influence, the open internet has transformed black audiences into digital agitators who can talk and fight back online.

It’s a good thing, too—because our voices online might be needed to save our lives offline.

An open internet protected by Title II net neutrality is what enabled #BlackLivesMatter to emerge, not as hashtag activism but as the amplified black demand for police accountability and greater democracy. #MeToo also went viral, not as a simple declaration of past injury but as a powerful demand resulting in a wave of accountability from those who abuse their power through sexual harassment and assault. In the spirit of those who used the internet to demand the ecological and human rights of indigenous communities at Standing Rock in North and South Dakota, immigrant voices are right now using the open internet to demand a clean #DreamActNow, while Muslim digital voices are demanding #NoMuslimBan.

The open internet uplifts the voices of people of color and racial-justice advocates, activists and dissenters of all stripes, as well as independent content creators, journalists and entrepreneurs. That’s why these constituencies have joined together, alongside millions of individual internet users, to demand that the FCC leave the 2015 rules in place.

It’s clear—the right to speak and to be heard, and the ability to seek opportunity, stay connected and protest injustice, are core civil rights. In a digital age, protecting these core civil rights and the black internet means enforcing, not repealing, Title II net neutrality.

There are lots of reasons why open internet activists are fighting to preserve net neutrality, from preserving free speech to protecting personal data. Now pro-choice activists say that losing an open internet would also be an attack on women’s abortion rights.

“The fundamentals of our organizing, these days, happens online,” said Kaylie Hanson-Long, national communications director for NARAL Pro-Choice America, a nonprofit that fights for access to abortion, in an interview. “It’s essential to the work that progressive organizations do and without a free internet, perspectives of our members could be muzzled because of the whims of an internet service provider.”

The internet is a critical tool for keeping women informed of their rights, the laws, and how to get the care they need. But if that is compromised or limited in any way, it could further limit women’s access to abortion in the US. The idea that losing net neutrality could harm access to health care isn’t totally new, several activists and nonprofits have argued that an internet without net neutrality would disproportionately affect minorities and low-income families.

And Hanson-Long told me we don’t have to think that far back to see how real this threat is. In 2007, NARAL began a text-messaging campaign to spread information about state and federal bills that would damage abortion access. Interested supporters could sign up to receive messages from NARAL, but Verizon blocked the message on its network. Verizon stated that it doesn’t participate in campaigns from any group “that seeks to promote an agenda or distribute content that, in its discretion, may be seen as controversial or unsavory to any of our users.”

Eventually, after much public pressure, Verizon reversed its decision, but Hanson-Long told me it’s an example of how corporate interests could stifle free speech if net neutrality isn’t protected.

For the past few months, the Federal Communications Commission has been collecting feedback on a plan to dismantle US net neutrality protections—regulations that prevent internet service providers from determining what content their users can and can’t see online. Open internet evangelists have been raising alarm bells about the consequences of losing these protections, staging a “Day of Action” Wednesday that included websites purposely limiting user access as a way to highlight the importance of an open internet.

If the FCC goes through with the plan, it could also hinder women’s abilities to look up free, open, and accurate information on abortion online—a crucial step in not only accessing reproductive health care, but also organizing political action. I pulled up Google search data on the term “abortion pill,” and found more people were looking it up in states where access to abortion is partially or severely limited, such as Mississippi and Louisiana, which may suggest a lack of access to information about abortion options.

“We know that these days so many corporations have their own perspectives that can really be damaging to women, to our movement,” Hanson-Long said, citing Hobby Lobby’s fight to deny employees birth control, which the supreme court upheld.

“Putting corporations in charge of the information that a person can receive is wrong.”