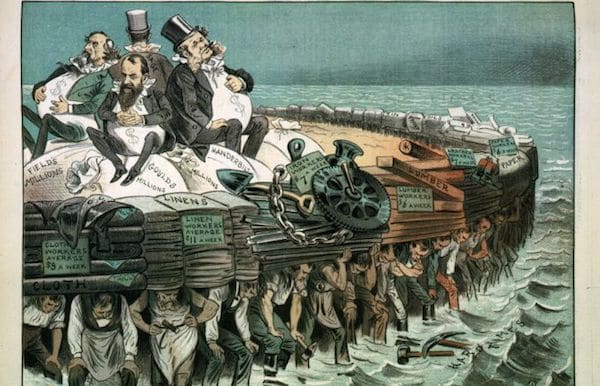 Contrary to widespread claims, there has been no labour market deregulation, but rather state re-regulation. For instance, occupational self-regulation (largely ignored by mainstream labour economists) has been displaced by state regulation through complex systems of licensing, while labour market and social policy has shifted towards means-testing, behaviour-testing and workfare, directing the unemployed and others to do state-determined activities to obtain means-tested benefits. Any semblance of universalistic rights-based social policy has been in retreat almost everywhere.

Fostering globalisation in the context of the ongoing technological revolution has been favourable for economic growth globally. But governments and international bodies have signally failed to counter adverse distributional outcomes within countries.1 Similarly, in advocating labour market flexibility, negligible attention has been given to the widespread economic insecurities this has generated.2

Meanwhile, the neo-liberal phase of globalisation has evolved into ‘rentier capitalism’, in which more and more income is going to those possessing physical, financial, or so-called intellectual property.3 Rental income has been boosted by increased firm concentration in many economic sectors – epitomised by the rise of ‘superstar firms’ – and by government action, most notably the strengthening of intellectual property rights protection and the growth of the subsidy state, as governments have chosen to compete by throwing subsidies at large corporations and rich individuals. In so doing, they have regressively depleted public budgets.

One term to describe this conventional fiscal policy is pluto-populism, whereby tax cuts and subsidies are concentrated on so-called entrepreneurs and ‘wealth creators’ while state benefits and public services are cut for low-income groups, ostensibly to reduce the budget deficits that result from the fiscal generosity to the rentiers.

If we wish to escape from the regressive economic paradigm, we must nurture a narrative and vocabulary that focuses on emerging socio-economic groups. In that regard, a global class structure has been taking shape, in which the new mass class is the ‘precariat’.

The precariat is defined in three dimensions. First, those in it are being pressured to accept a life of unstable, insecure labour, with casualisation now being extended by indirect labour relations in the ‘concierge economy’, crowd labour and on-call contracts. Within the next decade, a majority of labour transactions may be of this type, with labour brokers and apps being ubiquitous.

But although many commentators claim the precariat is defined simply by insecure labour, more importantly, they lack an occupational identity or narrative, must do a growing amount of work-for-labour that is neither recognised statistically nor remunerated, and typically must do jobs below their education level.4

To compound the insecurity, the precariat has lost rights-based state benefits, and has been hit by the drift towards means-tested, behaviour-tested benefits. The resultant poverty traps and what I have called ‘precarity traps’ are powerful disincentives to taking low-wage jobs. The precariat often faces what are in effect marginal tax rates of over 80%, which international bodies would deplore if applied to the salariat or elite.

The third dimension of the precariat is crucial. Those in it are losing all forms of rights – civil, cultural, social, economic and political.5 They are reduced to being supplicants, obliged to please people to gain income or benefits and depending on bureaucrats to make discretionary judgements in their favour. This is humiliating and intensifies feelings of insecurity.

While these dimensions of the precariat are evident, we still lack the statistics required to analyse them adequately. Just as the crisis of the Great Transformation led to a revolution in labour statistics, so we need one now. We should start by reconceptualising work, escaping from the twentieth-century prejudice that only paid labour counts.

Similarly, labour regulations must be reformed to correspond to the emerging forms of labour relations, recruitment practices should be regulated, and the occupational regulation system must be overhauled, to strengthen the right to practise.

Since a large proportion of the precariat consists of migrants, a more mature debate is required on migration. It has been dominated by talk of walls and bans on benefits, and policy has evolved in regressive class-based directions. There is also a need to respond to the growth of labour export regimes. The OECD should take up these issues.

Most importantly, the twentieth-century income distribution system has broken down. Across the OECD, real wages have stagnated for three decades and are unlikely to rise much over the next decade, for technological and globalisation reasons. If so, the options are either to allow inequality to grow or to build a new distribution system that allocates income more equitably. The latter is not the same as devising a more redistributive fiscal policy. The new system should foster ecologically sustainable economic growth and give proper respect for free markets.

This perspective should lead to reconsideration of such emancipatory mechanisms as basic income and sovereign wealth funds, which should be attractive to governments, business folk, unions and the precariat in general. In short, the perspective should enable us to envisage the re-embedding phase of the Global Transformation.