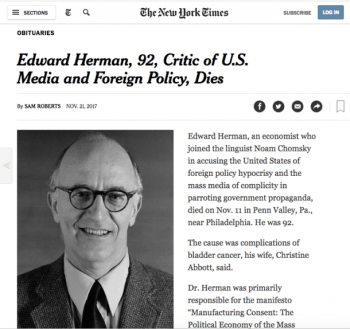 The New York Times‘ obituary (11/21/17) for pioneering media critic Edward Herman was not entirely unsympathetic; it ended, after all, with a quote from FAIR founder Jeff Cohen’s remembrance of Ed (FAIR.org, 11/14/17).

But it does contain a rather glaring error—one that illustrates a frequent criticism that Ed made of media outlets like the New York Times.

In the obituary, the Times‘ Sam Roberts wrote of the classic book that Ed co-wrote with Noam Chomsky:

Manufacturing Consent was severely criticized as having soft-pedaled evidence of genocide in Cambodia, Rwanda and, during the Bosnia war, Srebrenica.

The problem with this statement is that Manufacturing Consent was published in 1988—years before the 1994 Rwandan genocide or the 1995 Srebrenica massacre.

The book does deal at length with the Cambodian mass murders. It cites as the best analysis of Cambodian losses before, during and after Khmer Rouge rule the work of historian Michael Vickery, who estimated that the Khmer Rouge executed some 200,000 to 300,000 people, with a total of about 750,000 excess deaths (out of a population of about 7 million) due to killings, famine and disease, during their three-year reign. Vickery found that a lesser but comparable figure, about half a million, were killed in the US bombing of Cambodia beginning in 1969 and the concurrent Cambodian civil war.

The book did not argue that the Khmer Rouge’s Pol Pot was not guilty of mass murder, but rather that different standards of evidence and vastly different levels of outrage were applied to atrocities committed by the United States compared to those of official enemies—the latter having “worthy victims” and the former “unworthy,” in the book’s terminology.

Herman and Chomsky note that they came under sustained attack—referred to as “apologists for Khmer Rouge crimes” and the like—for insisting that the same standards be applied to mass violence, regardless of the perpetrators. As the authors say:

Charges against dissident opinion require no evidence and…ideologically useful accusations will stand merely on the basis of endless repetition, no matter how ludicrous they may be.

The New York Times‘ posthumous accusation that Manufacturing Consent was criticized for downplaying atrocities that happened years after it was published certainly falls in the “ludicrous” category.

Ask the New York Times to correct the claim that Herman and Chomsky’s Manufacturing Consent was criticized for “having soft-pedaled evidence of genocide” that hadn’t happened yet.