The ink has yet to dry on President Rodrigo Duterte’s Proclamation No. 360 signed last Thursday but killings and harassments of activists, indigenous peoples and human rights defenders have already increased over the weekend.

An activist was gunned down in Duterte’s hometown, Lumad communities evacuated in Surigao del Sur, and a human rights worker was beaten up inside a military camp in Northern Samar in what could be an unfolding of what Duterte meant when he barked, “Let’s just wage war.”

According to the victim’s wife (name withheld), she heard a series of gunfire five minutes after her husband left at about 7:49 pm left to buy dinner.

The wife then immediately asked her son (name also withheld) to check but found Apolonio bathed in blood and dead.

Apolonio was an active member of Anakpawis Partylist and a local campaigner of Congressman Ariel Casilao during the 2016 national elections, Karapatan said.

The Unyon ng Manggagawa sa Agrikultura (UMA) said Gagap, an active member of UMA-KMP, was attacked because she is a critic of the 29th Infantry Battallion-Philippine Army operations in their community.

Despite military presence in the community, the gunmen escaped unmolested, UMA said.

Another urgent alert, this time from Karapatan-Caraga, said residents from 12 Lumad communities in Brgy. Diatagon, Lianga and Brgy. Buhisan, San Agustin, both in Surigao del Sur evacuated due to military operations Sunday.

“At 1 pm today, November 26, at least 706 students and 51 teachers of nine Lumad schools evacuated yet again after three truckloads of soldiers arrived and set up checkpoints near their communities.

The soldiers reportedly required residents to write their names on a logbook as they pass through.

Soldiers were also seen in Km. 16 and Han-ayan in Lianga while a drone was reportedly seen flying over the communities Saturday night and Sunday morning.

Residents from said communities, including students and teachers from Lumad schools in the area, have repeatedly been subjected to military operations and forcible evacuation during the Macapagal-Arroyo, Benigno Aquino and the Duterte governments.

On September 1, 2015, two Lumad leaders and a school executive were murdered by paramilitary groups assisting soldiers in their operations in the communities.

As these developed, another human rights group, Katungod-Sinirangan Bisayas-Catarman Chapter, issued an alert saying its president Sargei Macallan was choked Sunday afternoon by a military officer inside the 20th Infantry Batallion camp in Catubig, Northern Samar.

In a Facebook post, Macallan said he was punched on the chest and held by the neck three times by Lt. Colonel George Domingo, commanding officer of the military unit.

Macallan and other Katungod staff went to the camp to provide legal assistance to three farmers reportedly abducted by the military Saturday in Palapag town.

The three farmers were members of the Northern Samar Small Farmers Association, who in recent weeks have been publicly tagged by the 20th IB as a legal front to the New People’s Army NPA, the revolutionary armed wing of the Communist Party of the Philippines. 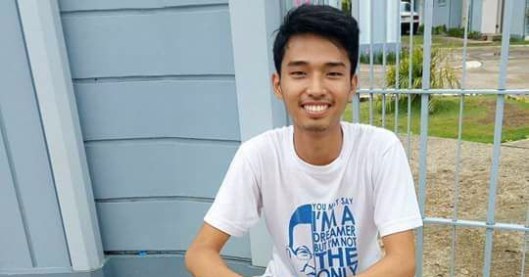 The farmers are being held inside the said military camp.

Earlier, Macallan complained of receiving threats from unknown persons who repeatedly told him his whereabouts were being traced.

After the reported manhandling by Domingo, Macallan proceeded to Catubig Police Station to file a report incident.

On his way out of the station, however, Macallan said he noticed two motorcycle-riding men casing the area, forcing him to go back inside.

A quick reaction team of fellow human rights workers from the capital town of Catarman later arrived to accompany Macallan at the station but were prevented by the police to enter, “because of orders from above.”

“I was really afraid, but I forced myself to focus on keeping myself as safe as possible under the circumstances,” Macallan told Kodao in an online interview.

Macallan is still at the police station as of this writing, waiting for rescuers to fetch him.

Duterte signed Proclamation 360 Thursday terminating peace negotiations with the NDFP as he repeatedly threatened to conduct mass arrests against activists he accuses of supporting the NPA.

In a statement Sunday, the Commission on Human Rights vowed to look closely into reports of human rights violations following Duterte and the Armed Forces of the Philippines’ threats to wage all-out war against the NPA and alleged supporters. # (Raymund B. Villanueva)