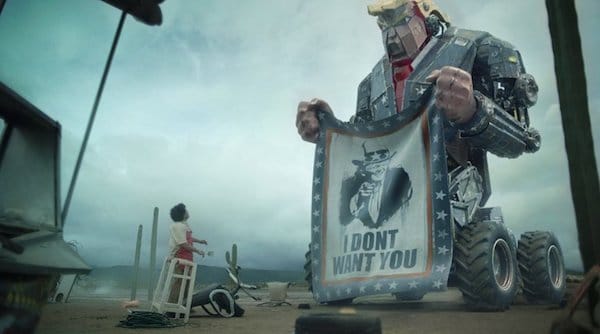 The New York Times’ radical reasonableness offers us a clear vision of the ways one can continuously adapt its position to the political context as to be in position of respectful negotiation with the status quo. On Tuesday (November 8, 2017), the newspaper published an article entitled “Eight Ways to Build a Border Wall” that presents the eight prototypes recently built on the southern United States national border which mark the beginning of the construction promised by the current president. The article unapologetically associates veneer drone footage to comparative shots of the prototypes with titles such as “Concrete or No Concrete,” “Opaque or Transparent,” or “Tube or No Tube?” that we would more eagerly associate with a kitchen-customizing multiple-choice form on a home improvement website, than with a serious examination of the political instrumentalization of architecture’s violence. In presenting a wall project it opposed during the 2016 presidential campaign in the sensational form of a commercial brochure with which US citizens are invited to shop, the NYT brings a tremendous legitimacy to this political project. Rather than examining the very ideological and societal axioms of such a project or insisting on the shattering fact that 10,000 people died attempting to cross this border (killed by heat stroke, dehydration, or by US militias), this article instead analyzes exclusively the “how” of the Wall in the usual adjustment to the new status quo. 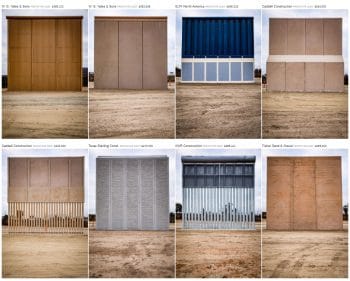 Screenshot of the NYT article “Eight Ways to Build a Border Wall.”

The NYT is, of course, not the only newspaper in the world that holds such a position of continuous readjustment to what they like to think as “the center.” Europe itself counts many equivalents that contributed to the political shift that has seen left-wing political parties of these last twenty years ponder how to solve the “immigration problem,” a question drafted and imposed by right-wing movements that succeeded to impose their invariable axiom — “there is an immigration problem” — without being challenged in its core. In a state like the US, built on settler colonialism and that currently provides very little in terms of welfare for the bodies present on its territory, we can be candidly surprised that such a political axiom would be so ubiquitously accepted. And yet, the current US president has been elected after having particularly pushed forward one of the most literalist aspects of his program, which happens to be an architectural project: the materialization and militarization of a line on a map (a concept inherent to the settler colonial politics practiced on both sides of it) that represents a border with the state of Mexico fixed in this location only since 1884. Something that was rarely mentioned during the 2016 US presidential campaign was that the wall that would militarize the border was not a new idea and already existed over 1,000 kilometers of border after the Georges W. Bush administration undertook its construction in 2006. 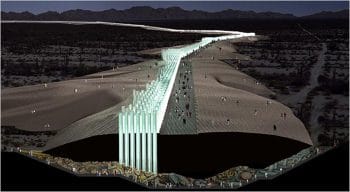 Back then, the NYT had proposed to thirteen architects to take part in a “reflection” on the design of this wall reported under the name “A Fence With More Beauty, Fewer Barbs” (in 2008, I had already written about it in an article entitled admittedly-not-so-subtly “How Far Can the Bullshit Go?”). Some architecture offices had declined the offer because “they felt it was purely a political issue,” but others, such as renowned Californian architect, Eric Owen Moss, had answered the call and proceeded to propose an architectural design for this “more beautiful” wall. In his report of the challenge in the NYT (June 18, 2006), William L. Hamilton had written the following: “Eric Owen Moss, an architect in Los Angeles, was more specific with his border as beacon of light. In his design, a strolling, landscaped arcade of lighted glass columns would invite a social exchange in the evening, much like the “paseo,” popular in Hispanic culture. ‘Make something between cultures, which leads to a third,’ Mr. Moss said. ‘Celebrate the amalgamation of the two’.”

It is easy to critique Moss’ position, his romanticist and essentialist rhetoric, and his office’s grotesque design. Similarly, the title of the challenge itself (whether it was introduced to architects under this name or not) has the capacity to mobilize a wide outrage for its radical candidness — in March 2016, during the US presidential campaign, a proposal for a design competition, entitled more soberly “Build the Border Wall?” and its relay in the mainstream architecture platform Archdaily, had triggered (legitimately) infuriated reactions from a certain amount of architects. Of course, beauty has the potential to normalize violent architectures and, in this regard, one can think of the (true or fictitious) story graffiti-artist Banksy told about his experience of painting on the Israeli Apartheid Wall: when an old Palestinian man allegedly told him that he was making the Wall beautiful, Banksy thanked him, to what the old man replied: “We don’t want it to be beautiful, we hate this wall. Go home.” Yet, we should not emphasize the importance of beauty’s normalizing capacities; after all, the architectures of the Israeli apartheid are unanimously recognized as ugly, but such a qualification never compromised their existence. 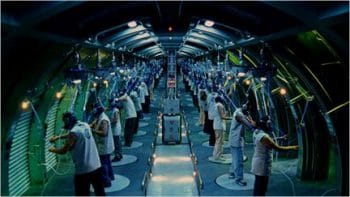 We nevertheless ought to focus on the other projects sent as a response to the NYT design challenge to realize that the most problematic characteristics of such a call are less to be found in the transformation of the wall from ugly to beautiful, than in its transformation from inert to productive. In his report, Hamilton had written, “Four of the five who submitted designs proposed making the boundary a point of innovative integration, not traditional division — something that could be seen, from both sides, as a horizon of opportunity, not as a barrier.” From James Corner’s “solar energy-collecting strip that would produce what he described as a ‘productive, sustainable enterprise zone’ that attracted industry from the north and created employment for the south” to Calvin Tsao’s “enterprise zone […] as a series of small, developing cities,” we can see how the productivity and usefulness are regarded as mitigating the violence of the border when, in fact, they make it more durable by creating new dependencies on its existence. They also reproduce the North/South exploitative relationships at a local scale involving a border porosity for some (as well as goods and capitals) while making it impermeable for others as Alex Rivera potently illustrates in his 2008 film Sleep Dealer about the maquiladoras of a near future. 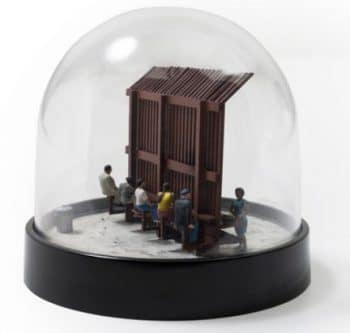 The “Burrito-Wall,” a “souvenir” by Ronald Rael.

After having written my not-so-subtle article in 2008, I remember subsequently debating about this question with US architect and professor Ronald Rael, who, back then, was already engaged in the research work that has been recently published in the form of a book entitled Borderwall as Architecture: A Manifesto for the U.S.-Mexico Boundary(University of California Press, 2017). Although Rael’s approach to the wall is drastically more complex and critical than the capitalist and technocratic “solutions” offered by the architects cited above, part of his design hypotheses regarding the Wall are also attempting to make it more productive, as well as to “institutionalize through models and drawings, events that are already occurring on the wall” (source). In an interview given for another NYT article, he aptly expresses the contradiction in which he finds himself: “[Rael] makes the argument that we should view the nearly 700 miles of wall as an opportunity for economic and social development along the border — while at the same time encouraging its conceptual and physical dismantling” (Allison Arieff for the New York Times, March 10, 2017). This contradiction is the same than the one analyzed by Eyal Weizman in “The Best of All Possible Walls” (The Least of All Possible Evils, Verso, 2011) when he describes the legal action of some Palestinian lawyers and activists in the Israeli High Court of Justice in Jerusalem arguing for alternative routes for the Israeli Apartheid Wall during its construction in 2004.
Weizman’s entire book is dedicated to what he calls “humanitarian violence” in its subtitle: “Humanitarian Violence from Arendt to Gaza.” We can try to define this violence as the consequence of actions undertaken in an effort to mitigate a given violence but, in their compromising negotiation with that it claims to be fighting against, ends up bringing a greater legitimacy and inertia to it than if these actions had not been initiated in the first place.

The NYT’s editorial line could not be more at odds with this concept and, as such, provides one of its most illustrative examples. It is however important to observe that the fundamental difference between the NYT’s positioning and that of the Palestinian lawyers and activists that Weizman describes in their legal attempts to slightly divert the Apartheid Wall’s route in order to locally save the access of farmers to their fields and the junction of houses with the rest of Palestinian towns, is to be found in the fact that Palestinians are the first concerned by the Wall and, as such, have a legitimacy to recognize the inertia of the status quo and negotiate with it even if it brings more weight to it. On the contrary, the NYT represents the interests of a significant part of the US establishment that can afford to live with the political program of the current president when they do not benefit from it one way or another. Its negotiation with this political reality can therefore not act as the catalyst for reform that it would like to embody; on the contrary, it rather produces the profound and durable legitimization of it.