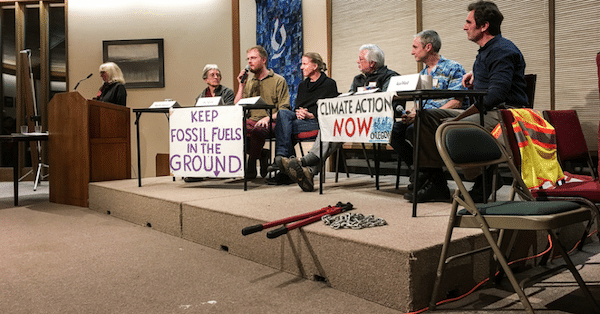 In October 2016, while President Barack Obama was still in office, five climate change activists, including me, cut chains and closed emergency shutoff valves on five tar sands oil pipelines in four states. In one morning, we briefly stopped the flow of all Canadian tar sands oil into the United States.

We did it because continued failure to reduce carbon emissions threatens our children’s lives. Federal and state government have known about the threat for decades. We must begin reductions immediately or miss our chance to prevent outright climate catastrophe.

We videotaped and livestreamed our actions, and called the pipeline companies so they could safely shut down the pipelines. We closed the valves and waited on the scene for the police. We were arrested and charged with severe felonies.

In addition to being prosecuted in state courts, we are also the target of a recent letter signed by 84 members of Congress to the Justice Department, asking why the agency hadn’t also prosecuted us under federal law, and whether our actions meet the definition of domestic terrorism under the Patriot Act.

That’s preposterous, and likely an attempt at intimidation. But we’re undaunted. We are pleading “not guilty” in court and arguing before our juries that the climate emergency necessitated our closing of the emergency valves. The U.S. must quickly transition to alternative energy sources, and the dirtiest fuels like tar sands must be the first to go. Our actions were the equivalent to breaking into a burning house to save children trapped inside.

The legal name for that argument is “necessity defense.” It contends that our actions were warranted by the need to prevent worse harms. And, it allows defendants to put expert witnesses and testimony about those climate harms before the jury. In valve-turner trials in North Dakota and Washington state, and in my own trial coming up in Montana, the judges threw out the necessity defense, so our juries were prevented from hearing testimony about climate change. But in a pending valve-turner trial in Minnesota, the judge granted it, which could be a far-reaching precedent.

Even leaders who do acknowledge climate change aren’t combatting it effectively. California Gov. Jerry Brown and other officials at this week’s climate conference in Bonn say they’ll implement the Paris agreement despite Trump’s withdrawal. Yet every plan on the table fails to meet Paris’ goal of limiting warming to 1.5 degrees centigrade.

Our lives are at stake. But people won’t understand that until some of us demonstrate we’re indeed fighting for our lives. The courageous, prayerful, nonviolent example set at Standing Rock exhibited the same powerful vulnerability as the march on Selma. That’s the blueprint. If we’re serious about protecting our loved ones, we have to put ourselves on the line.