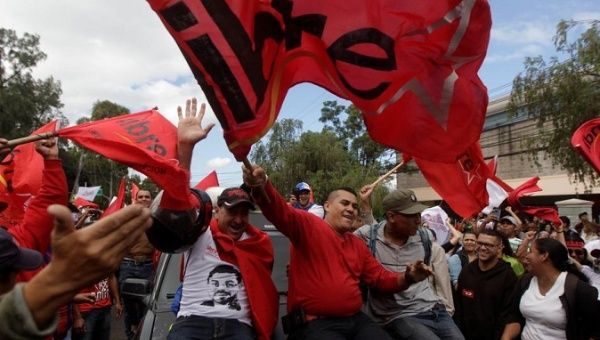 In an exclusive interview with teleSUR, Salvador Nasralla of the Opposition Alliance affirmed there was fraud at the polling stations, with even dead people voting as well as people who live in the United States.

During the interview, Nasralla reiterated his call for the recounting of the ballots.The candidate maintained that “if the 1,600 ballots are reviewed,” as well as the ballots along with the booklets and the votes that arrived physically, he would not have “problems in accepting the results.”

The Honduran candidate also admonished that the suspension of constitutional guarantees “is a constraint and an injustice.”

Nasralla also earlier confirmed a telephone conversation between Honduras’ Opposition Alliance and Supreme Electoral Tribunal member Marco Ramiro Lobo, where the official confirmed a victory for the alliance, according to a post on Nasralla’s Facebook page.

“The people united will never be defeated! Honduras united against fraud! Why does the TSE run from democracy?” Nasralla asked in another post, along with a video of street protests.

The Chief Justice of the Supreme Electoral Tribunal of Honduras David Matamoros Batson issued the first official results from the elections that took place on Nov. 26, earlier on Monday.

According to the results issued by the electoral body, the National Party incumbent President Juan Orlando Hernandez obtained 42.98 percent of the votes, while the Opposition Alliance’s Nasralla received 41.39 percent. The TSE said there was a 53 percent citizen participation, representing more than 3,800,000 voters. 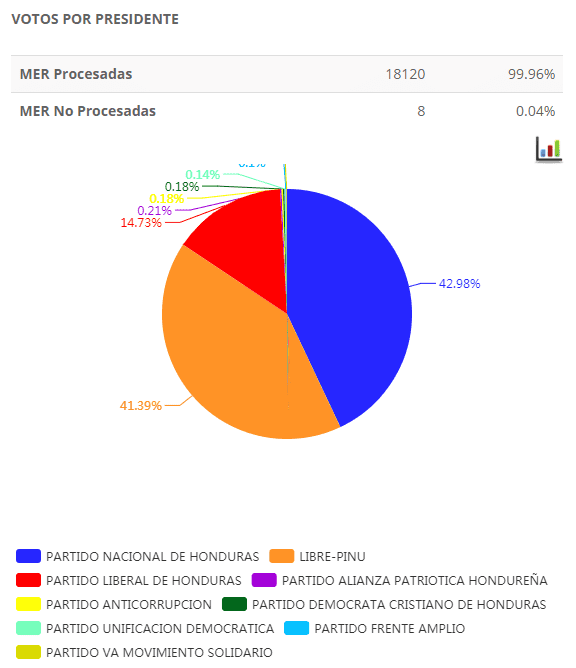 Former President Manuel Zelaya, leader of the opposition, accused the TSE of stealing the election from the alliance, “The TSE does not want complete collations of the 5,179 fraudulent ballots,” he posted on Twitter.

He urged people to oppose the fraud, “Let’s go back into the streets with the world’s view and patience. They are stealing the presidency from us @SalvadorAlianza,” adding that people should not be afraid of the state of siege since they are 2 million strong and brave.

Zelaya invited the media to an Opposition Alliance press conference to be held at 1 p.m. local time and thanked the EU for statements calling for electoral transparency.

Head of the Electoral Observation Mission of the EU in Honduras Marisa Matias said to the press, “It’s important to note that the process is not finished. The process is far from finished,” assuring that the mission would stay in the country for as long as it takes.

Only hours after the government imposed a 10-day curfew and suspension of constitutional rights on Friday, demonstrations dubbed “Caceralazo” took place throughout Honduras to defend presidential election preliminary results which showed opposition candidate, Nasralla with a comfortable lead over right-wing Hernandez.

A day after denouncing vote count irregularities by the TSE after repeated election result postponements, Nasralla posted on Twitter for people to assemble “To defend the victory of the people!” They were met by police repression.

At least 3 people – including a teenaged girl – have been reportedly killed in violent attacks on protesters following the disputed elections, as the armed forces opened fire on unarmed opposition supporters.

Matamoros said that election officials are “pleased with what we have seen today, a very intense participation of citizens,” also noting that “we are respecting the decision they made,” reporting that “the TSE has not modified a single ballot.”

But Wilfredo Mendez of the National Board of Honduras for Human Rights said Sunday, “Beyond a state of siege we are experiencing a state of terror with the suspension of constitutional guarantees.”

Nasralla posted on his Facebook page that the “illegal and unjust curfew is nothing more than a coup against the votes of the people who do not want the current president.”