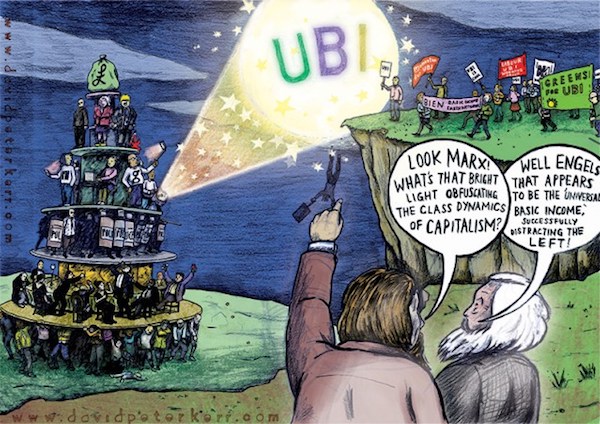 “A cartoon I made about UBI was also, ‘highly commended,’ in the 2017 Tony Farsky International Marx Bicentenary Cartoon, Poster and Caricature Competition.” Art by David Peter Kerr.

Next May 5 marks the bicentenary of the birth of Karl Marx and to celebrate one of the most important dates in world history The Ken Sprague Fund has organised an international cartoon and caricature competition, the winners of which have just been announced.

The Tony Farsky International Marx Bicentenary Cartoon and Caricature Competition drew hundreds of entries from artists from all over the world. 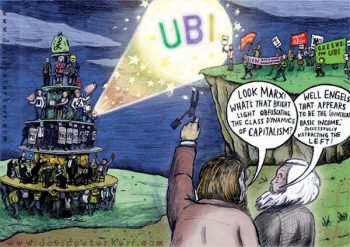 “A cartoon I made about UBI was also, ‘highly commended,’ in the 2017 Tony Farsky International Marx Bicentenary Cartoon, Poster and Caricature Competition.” Art by David Peter Kerr.

They were tasked with submitting work commemorating Marx and his significance and the jury awarded a joint first prize to Stefan Siegert of Germany for his caricature of a laughing Marx and Ukrainian Konstantin Kazanchev for his cartoon of Marx confronting a young skateboarder with a Che Guevara T-shirt. Second prize went to Raed Khalil from Syria for his black-and-white drawing of Marx’s head with a flock of birds breaking into flight from it.

Third prize went to Ehsan Ganji from Iran for his cartoon of a factory worker on an assembly line manufacturing truncheons for police who then use them to attack him when protesting.

The work of a number of entrants was highly commended and, along with the winners, their efforts are being published in the book I’ll Have the Last Laugh Yet! Karl Marx 1818-2018 in Cartoons, with brief quotations from Marx’s works interspersed with the images.

The few surviving photos of Marx depict a deadly serious and unsmiling Teutonic-looking intellectual, but in real life Marx was a humorous individual with a sharp and satirical wit. His letters to friend and collaborator Friedrich Engels reveal a very different person from the one in the photos.

He surely would have been tickled — and maybe honoured — to see himself caricatured, lampooned and eternalised in such humorous ways as the images in the book show.

Cartoonist Martin Rowson said of the book: “I got my first big break doing gags about Karl Marx. The point, however, is that so did he. Any idiot who thinks of Marx as a dour, humourless leftie has never read him and probably never met a proper leftie either. This splendid book should put them right on both counts.”

What these cartoons and caricatures reveal is a wide range of political interpretations — some portray Marx himself, others indict capitalism and yet others vilify the whole Marxian outlook or ridicule its impact.

Some are sharply funny, some deadly serious and yet others acerbic.

The Pole Marek Tofil portrays Marx as a body builder, tattooed with the name of his friend Engels, the Communist Manifesto and other related memorabilia, while the Dutchman Olivier Siersma has Marx putting Kim Jong Un over his knee.

German Stefan Siegert has drawn a leafless tree that you can hang on your workplace wall without the boss realising that, hidden in the branches, is a covert portrait of Marx. Pole Marek Mosor reflects on what Marx would say today about workers uniting for lesbian and gay rights.

These are just a few of the diverse takes on Marx and his ideas and they demonstrate that, although he was born two centuries ago, he is probably better known today than in his heyday and his ideas still provoke debate and provide inspiration, not least for cartoonists and caricaturists.

What is clear from all the contributions is that Marx and his ideas have had a profound impact on the world and the history of ideas, whose relevance still resonates.

As the Church of England priest and Guardian columnist Giles Fraser put it, “Ever since the fall of the Berlin Wall in 1989, the right have assumed that the argument against communism had been won, and won decisively. But the young are picking up their Marx once again.”

The book will shortly be available online from bookshops for £8.99 plus p&p. For further information, contact John Green at the Ken Sprague Fund, 11 Dorset Road, London W5 4HU or email info@kenspraguefund.org.