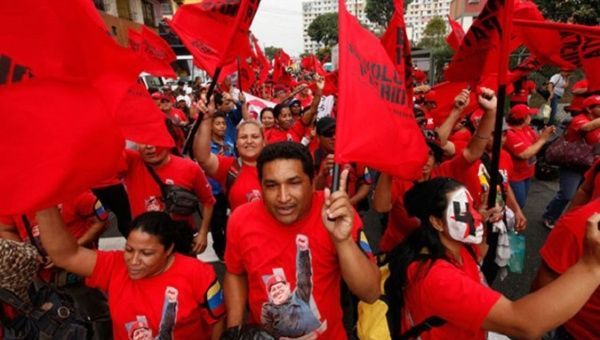 Dec. 10 will not only go down as a date to remember in the annals of Venezuelan history for the Battle of Santa Inés of 1859 during the Federal War, but will also be bitterly remembered by the bourgeois opposition for the electoral hammering they received at the hands of Chavismo in the municipal elections held on that fateful day in 2017.

The United Socialist Party of Venezuela, PSUV, painted the municipal map deep red by winning 327 of 335 (97.6 percent) mayoralties democratically contested leaving the arrogant and stubborn opposition with a bloodied nose as their destabilization strategy fell apart. The major opposition parties such as First Justice, Popular Will and Democratic Action did not postulate candidates and recommended abstaining to their supporters – which they duly did – handing these nationwide elections on a silver platter to President Maduro.

Voter turnout was 47.2 percent or just over 9.3 million votes. This was no surprise as opposition voters followed the example of lemmings plunging over a cliff and stayed at home blindly adhering to their leaders’ abstention advice and not supporting the democratic process.

This was a repeat of the 2005 parliamentary elections when the opposition withdrew its candidates and handed all 165 congressional seats to Chavismo. Besides the example of the 2005 abandonment of the democratic process, the opposition also preferred not to participate in the election of the plenipotentiary National Constituent Assembly on July 30 and handed all 545 seats to Chavismo and its sympathizers.

The opposition leadership never learns from its mistakes as it has become abundantly clear that the man in the street wants democratic rather than violent or U.S. invasion solutions to the country’s problems.

In Libertador municipality that encompasses most of Caracas, PSUV candidate, 45 year old Erika Farías Peña romped home with over 493,000 votes (65 percent+ – an all time record) and became the first woman mayor of the city in its 450 year history since it was founded in 1567.

Farías is former governor of Cojedes state in the Venezuelan plains and an experienced political campaigner. She effectively wiped the floor with Nicmer Evans (5 percent of the vote), a former chavista intellectual, who founded the Socialist Tide Party and who, ironically, was lauded as a “democrat” by the opposition since they thought it could fracture the critical unity of Chavismo and the PSUV.

The only major mayoralty won by the opposition was in the frontier state of Tachira where the once leading Social Christian Party, COPEI, with its candidate Gustavo Delgado, won the state capital’s mayoralty in San Cristóbal.

All other state capitals, including that of Zulia state in Maracaibo fell to the PSUV tsunami as well as the bonus of the PSUV winning the governorship of the nation’s biggest voting state, Zulia, thanks to a solid campaign by new governor Omar Prieto.

This is the worst electoral defeat for the opposition in Venezuela since 2005 and indicates that massive swathes of the voting population are not interested in backing politicians that have asked for sanctions by President Trump on their own country and who are known to be behind the economic war that is gradually destroying the economy and health of the nation.

With three landslide electoral victories by the PSUV  in 140 days – Constituent Assembly, State Governors and Mayoralties – it is hard to paint Venezuela as being non-democratic no matter what tripe is written in the New York Times, Washington Post, the BBC or the Guardian. Over 30 million people turned out to vote in these elections despite opposition calls to abstention in two of them.

The population of Venezuela is about 30 million and the percentage of voters turning out in “third world” Venezuela is far superior to equivalent elections in EU countries and many neighboring countries of the Americas.

The 335 mayoralty results were published and confirmed while poor Hondurans were still waiting for the results of their presidential elections held more than two weeks ago.

Democracy is alive and kicking in Venezuela – just ask the U.S. Transition Office in their bunker Embassy built into a hillside in Caracas after the “kicking” they and their lackeys received at the ballot box on Dec. 10, 2017 – all but wiping them off the electoral map.