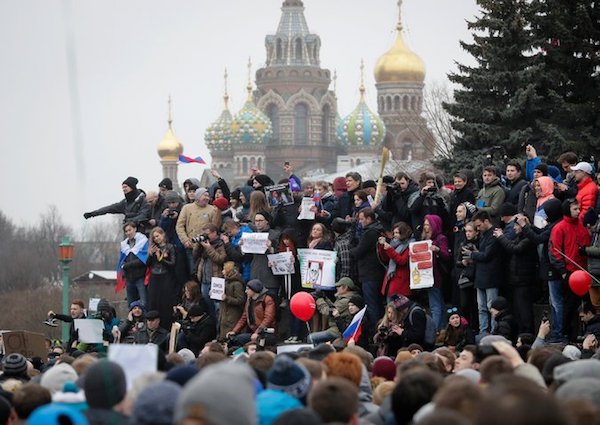 The following excerpt (translated from Johnson’s Russia List #238) discusses a poll published by Vedomosti, a right-wing, free market, neoliberal business journal. Despite the source, it turns out that the top “reforms” in demand are for “social equality,”  “fighting corruption,” “reducing dependence on hydrocarbons,” and spending more on science, education and health—in that order. Promising news about the young generation of Russians.

…
According to a survey by the Russian Academy of Sciences, 51% of Russians believe the country needs “significant reform” over “stability.” Though a small majority, that’s the first time “reform” has won out since before 2003, perhaps indicative of a changing political mood locally. Per the polling, the younger generation is the most pro-reform, with 62% in favor. That figure drops to 51% for those between 31 and 40. 41 to 50 year olds are almost evenly split, with pensioners most in favor of preserving stability. Geographically, supporters of reform are concentrated in large cities and oblast centers – and perhaps surprisingly, among rural residents. Notes Vladimir Petukhov, the newfound reform sentiment has been brought on by protracted economic crisis: respondents associate the status-quo and stability with turmoil in the economy and a declining standard of living. The survey also found that among the most in-demand reform items are social equality and fighting corruption (named by 51% of respondents), reducing dependence on hydrocarbons (41%) and the reform of science, education, and health (37%) – likely in the form of the reallocation of spending towards them. Meanwhile, political reforms and turnover are less popular: only 10-12% of respondents support boosting freedom of speech or taking a more conciliatory approach in relations with the West.
…
Monthly Review does not necessarily adhere to all of the views conveyed in articles republished at MR Online. Our goal is to share a variety of left perspectives that we think our readers will find interesting or useful. —Eds.