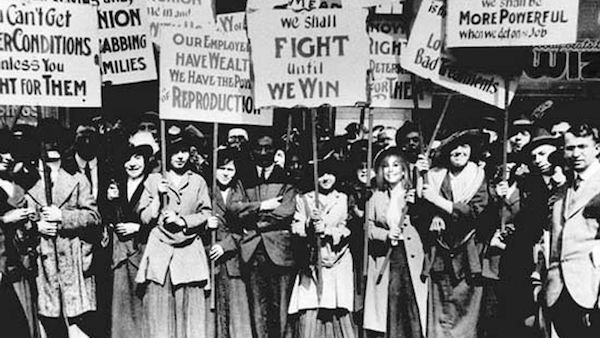 No doubt about it, the recently passed tax bill is terrible for working people.  But as Lance Taylor states in a blog post titled “Why Stopping Tax ‘Reform’ Won’t Stop Inequality”: “Inequality isn’t driven by taxes—its driven by the power of capital in relation to workers.”  Said differently we need to concentrate our efforts on shifting the balance of class power.  And that means, among other things, putting more of our energy into workplace organizing and revitalizing the trade union movement.

The rich really are different

Taylor uses the Palma ratio to highlight the growth of income inequality. The measure, proposed by the Cambridge University economist Jose Gabriel Palma, is defined as the ratio of the average income of a wealthy group relative to the average income of a poorer group. Taylor calculates Palma ratios “for the top one percent vs. households between the 61st and 99th percentiles of the size distribution (the ‘middle class’) and the sixty percent at the bottom.” 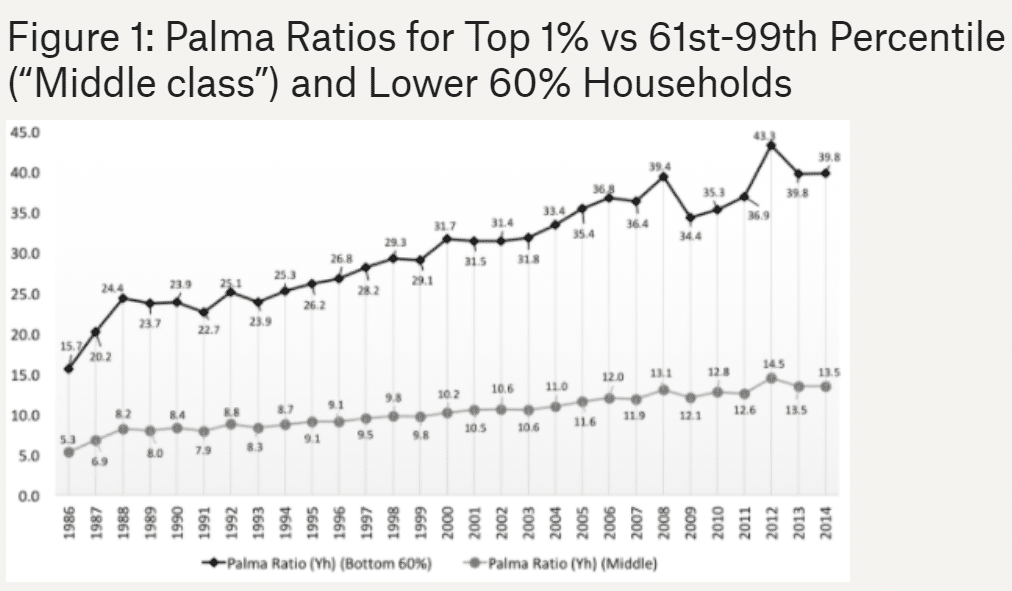 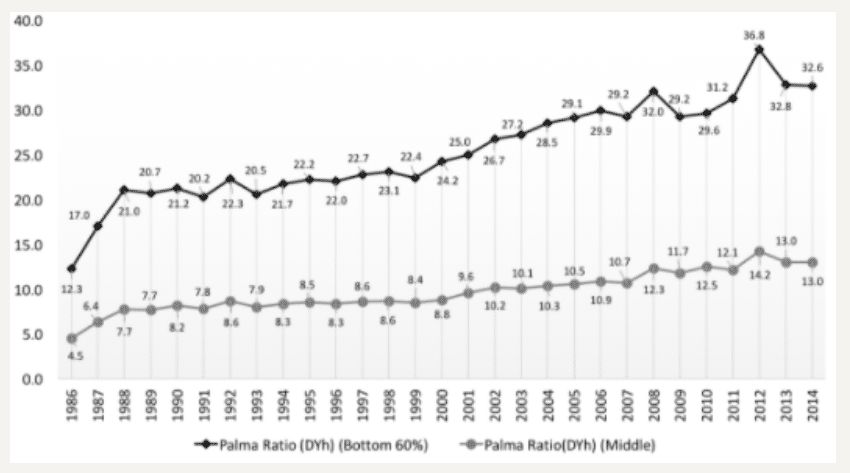 In both figures we see growing ratios, which means that the top 1 percent is increasing its income faster than the other two groups, although the gains are not quite as large in the case of after-tax income, suggesting that taxes and transfers do make a small but real difference.

Be that as it may, the ratio of the top group’s after-tax income relative to Taylor’s middle group grew 3.85 percent per year over the period 1986 to 2014, while the ratio with the bottom group grew 3.54 percent a year.  As Taylor comments, “Such rising inequality is unprecedented. These rates are a full percentage point higher than output growth, and are not sustainable in the long run.”

An IMF study of the relationship between income inequality and labor market institutions in twenty developed capitalist countries over the period 1980 to 2011 came to a similar conclusion, although it focused on the top 10 percent rather than the top 1 percent. As Florence Jaumotte and Carolina Osorio Buitro, the authors of the study, explain (and illustrate in the figure below):

As with measures of income inequality, changes in the distribution of earnings indicate that inequality has risen owing largely to a concentration of earnings at the top of the distribution. Gross earnings differentials between the 9th and 5th deciles of the distribution have increased over four times as much as the differential between the 5th and 1st deciles. Moreover, data from the Luxembourg Income Survey on net income shares indicate that income shares of the top 10 percent earners have increased at the expense of all other income groups. While there is some country heterogeneity, the increase in top income shares since the 1980s appears to be a pervasive phenomenon. 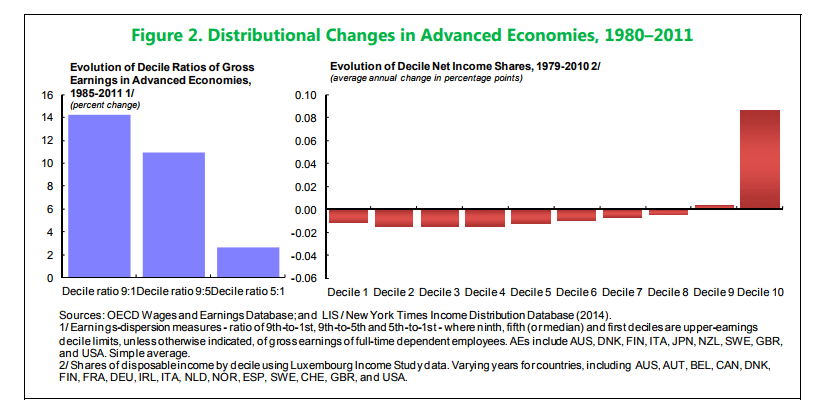 As we can see in the first figure above, rich households, with a mean income of greater than $2 million a year, have “40 times the income of the bottom 60 percent and 13.5 times payments going to the middle class.” In the figure below, Taylor illustrates the source of that income.  One way or another, he finds that it comes from capital ownership and profits. 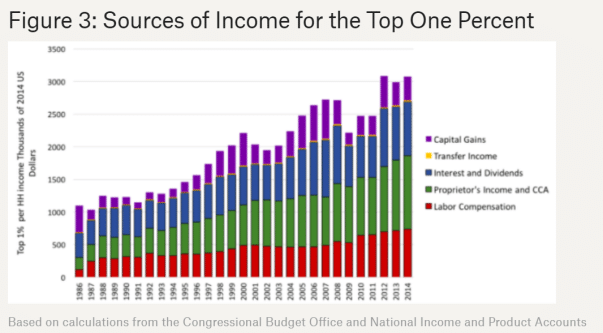 As we can see, labor compensation has grown rapidly over the last few years, and now exceeds $500,000 per year.  Still, it represents only roughly nine percent of the total, significantly less than either of the other two main income categories, proprietor’s income and interest and dividends.  Proprietor’s income, interest and dividends, and capital gains all flow from ownership.  So, in fact, does an important share of labor compensation which includes bonuses and stock options.

Given that the bulk of income of the top one percent comes from profits through one channel or another, the obvious inference is that the rising Palma ratios in Figure 1 were fueled by an ongoing shift away from wages in the “functional” income distribution between labor and capital.

The question is why wages of ordinary households lagged.

After examining patterns and trends in business profits, Taylor concludes that the primary answer lies in the ability of firms to hold down wages.  Among the reasons for their success:

Changes in institutional norms (laws, unionization and other of the game) surely played a role. Robert Solow (2015) from MIT, the doyen of mainstream macroeconomics, observes that labor suffered for reasons including “the decay of unions and collective bargaining, the explicit hardening of business attitudes, the popularity of right-to-work laws, and the fact that the wage lag seems to have begun at about the same time as the Reagan presidency all point in the same direction: the share of wages in national value added may have fallen because the social bargaining power of labor has diminished.”

Divide-and-rule in a “fissuring” labor market, as described by David Weil (2014) is one aspect of this process. Globalization, which came to the forefront in the 2016 Presidential election, also played a role.

The IMF study again provides support for this conclusion. A simple correlation test of the relationship between labor market institutions and inequality produced “a strong negative relation between the top 10 percent income share and union density.”  Econometric tests that attempted to control for technology, globalization, financialization, tax rates and a host of other variables confirmed the relationship.  As the authors explain:

Taylor doesn’t minimize the significance of the ongoing tax changes.  But as he states:

it took 30 or 40 years for the present distributional mess to emerge. It may well take a similar span of time to clean it up.  Progressive tax changes of $100 billion here or $50 billion there are not going to impact overall inequality. The same is true of once-off interventions such as raising the minimum wage by a few dollars per hour.

Long-term improvement requires changes to the present situation that can cumulate over time.

And that requires rebuilding labor’s strength so as to secure meaningful wage increases and a transformation in economic institutions and dynamics.  As the IMF study makes clear, fighting for strong unions must be an important part of the process.