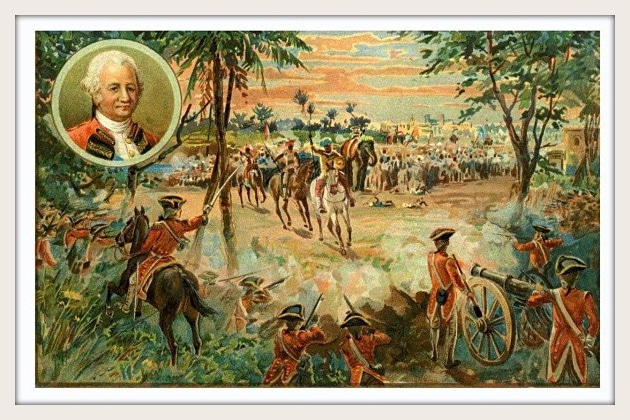 Painting depicting the Battle of Plassey (Palashi, India) in 1757.

On February 19, 1881, Karl Marx had written a remarkable letter to N.F. Danielson, the renowned Narodnik economist who had also gone under the name of Nikolayon and whose work had been much discussed by Lenin. In that letter Marx had said the following:

In India serious complications, if not a general outbreak, is in store for the British government. What the English take from them annually in the form of rent, dividends for railways useless to the Hindus; pensions for military and civil service men, for Afghanistan and other wars, etc., etc. – what they take from them without any equivalent and quite apart from what they appropriate to themselves annually within India, speaking only of the value of the commodities the Indians have gratuitously and annually to send over to England – it amounts to more than the total sum of income of the sixty millions of agricultural and industrial labourers of India! This is a bleeding process, with a vengeance! The famine years are pressing each other and in dimensions till now not yet suspected in Europe!

This paragraph is remarkable for several reasons. First of all, it is the first place where Marx mentions the “drain of surplus” from India to Britain, or, more generally, from the third world to the metropolis. The fact that metropolitan capital seeks markets all over the world, and, for that reason, breaks down the “Chinese walls” of all hitherto insulated societies, ie, the fact that there is an imperialist drive underlying a quest for markets all over the third world, was recognised by Marx and Engels in The Communist Manifesto itself; but imperialism’s sucking out of surplus from these outlying regions had not figured in any of Marx’s earlier writings.

Secondly, since this surplus was over and above what was appropriated from the workers exploited by metropolitan capital at home, it clearly played a role, and that too a role of considerable significance, considering the scale of extraction from India that Marx had mentioned, in the dynamics of metropolitan capitalism. In other words, even though Marx does not say so explicitly, it is clear from his remarks that capitalist dynamics could not be analysed in complete disregard of this enormous extraction. That would be, if not exactly akin to staging Hamlet without the Prince of Denmark, then at least to staging Hamlet without Claudius, the usurper King of Denmark.

Thirdly, it is the only recognition in Marx of any significant role whatsoever of imperialism in the dynamics of metropolitan capitalism, beyond the stage of primitive accumulation of capital. Imperialism does figure in Marx’s discussion of primitive accumulation of capital. But after that it is scarcely seen to play any significant role in his analysis.

This has always been a curious fact, since nobody wrote with greater knowledge than Marx, and with greater insight as well, into what metropolitan capitalism had done to the colonised economies; and his feelings for the colonised people were palpably full of sympathy. But there is very little in all three volumes of Capital about the impact of imperialism on the metropolitan economies. In Volume III of Capital there is some discussion of the role of colonial trade on counteracting the falling tendency of the rate of profit, but otherwise there is a complete absence of any role assigned by Marx to imperialism in his analysis of metropolitan capitalism.

What is particularly strange about this absence is that Marx was writing his seminal articles about British rule in India for the New York Daily Tribune around exactly the same time when he was working on Capital; and no doubt his trips to the British Museum which he utilised for researching on Capital were also employed in unearthing information on the impact of British rule in India. And yet there is no trace in the central core of the argument of Capital of any impact of British rule in India on the British economy, almost as if British rule was just a sort of sideshow to the main drama of capitalism, as it had been taken to be in the writings of classical political economy, especially of David Ricardo.

The model of capitalism analysed by Marx in Capital is for all practical purposes a model of a closed and isolated economy. To be sure, one can extend this model to incorporate a colonial relationship, viewed essentially as providing a market where metropolitan goods are transformed for those third world products which are required by the metropolis; but colonialism as a provider of surplus for accumulation in the metropolis, exactly on a par with the domestically appropriated surplus value from the workers, simply does not figure in the analysis. The letter to Danielson is the first time that it does figure in Marx’s writings.

The letter to Danielson in short is extremely important in marking a certain new trend in Marx’s thinking. And the question arises: how did Marx arrive at the figures mentioned in that letter and the constituents of the “drain”? Notwithstanding his extraordinary erudition he could not have arrived at these figures on his own, since it required a certain specialised knowledge of Indian budgets, for which he would hardly have had time. How then did he come to these conclusions?

A clue to this puzzle is provided by the fact that Dadabhai Naoroji, who did arrive at these figures, and was the first to do so (as early as in 1867 though his magnum opus, Poverty and Un-British Rule in India, was to be published only in 1901), and Karl Marx, shared a common friend in HM Hyndman, an interesting person, who was a well-to-do businessman who became a committed socialist after reading the Manifesto and Volume 1 of Capital, and set up an organisation called the Social Democratic Federation. Marx and his daughter had dinners at Hyndman’s house where it is not inconceivable that they might have met Naoroji and discussed with him the issue of the “drain of surplus” from India. Even if Marx and Naoroji did not personally meet, it is more than likely that Naoroji’s estimates were passed on to Marx by Hyndman who had known Naoroji for many years and had access to the latter’s ideas.

There is some internal evidence for this contact, direct or indirect, in the text of the letter to Danielson itself. Hyndman  wrote a book on famines in India under British rule, for which he consulted Naoroji for sources, and for evidence on the extent of poverty. The link between the famines and the “drain” is so obvious, and must have figured so prominently in Naoroji’s mind and hence in Hyndman’s thinking as well, that Marx’s reference to “famine years” immediately after talking of the “bleeding process” suggests a clear commonality of ideas.

Marx died, alas in just about two years after his letter to Danielson and he had no time to develop the ideas contained in that letter further. But that letter, which marks a turning point in Marx’s thinking, bears testimony as much to the openness of his mind, as to the fact that there was a parallel subterranean stream in his thinking which has remained unexplored to this date. It negates the view held by many, including by many third world intellectuals including even Edward Said, that he was not sufficiently sensitive in his analysis to the entire issue of imperialist exploitation.