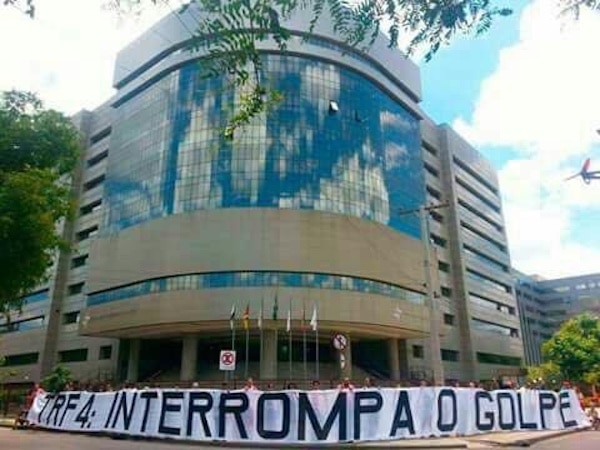 Some are calling it the Coup’s endgame, others the “final battle” for Brasil’s next decade.

Former President Lula, who held office from 2003-2011 has twice the support of his nearest rival to succeed Putschist Michel Temer in the October 2018 elections.

However, on the 24th January in the southern city of Porto Alegre, he will face judgement on his appeal against a conviction which could prevent him running for office, a case which numerous critics, at home and abroad, have dismissed as baseless and without actual evidence. If his conviction is upheld he would not only be barred from the Presidency but face arrest and up to a decade in prison.

It is now widely believed, and not only amongst his supporters, that the case against Lula is political-legal persecution, or Lawfare, and there is also ample evidence to suggest that it has the full support of North Atlantic powers and corporate interests, which are represented by lobby organisations and think tanks such as AS/COA and the Atlantic Council, and thus permeates through English-language coverage of Brasil. Newspapers such as the Guardian, New York Times and Washington Post, continue to pretend that Lula’s case is being conducted normally and fairly. This mirrors what happened in the run up to Dilma Rousseff’s impeachment, “Brazil’s institutions are working”, a briefed corporate media insisted.

Comedian Gregorio Duvivier remarked in his Folha de São Paulo column, that in today’s Brasil, if you are against conviction without proof, you are deemed an extremist.

A conspicuous failure to prosecute anyone from the conservative US-backed PSDB (to whom Lava Jato’s inquisitorial Prosecutor-Judge Sergio Moro is connected), despite far greater and more tangible evidence such as that surrounding their defeated 2014 presidential candidate Aécio Neves, has made a mockery of insistence that the vast (and unprecedentedly well promoted) anti-corruption probe is politically neutral. In addition, the economic effects of Lava Jato, from its mandated freezing of construction and energy sectors, contributed to the economic contraction which many used to justify Dilma Rousseff’s illegal impeachment, a deepening of recession which Atlas Network-connected group MBL, campaigning for her removal, actually celebrated as a means of recruitment to their cause.

Crucial to this story is that the conservative bloc which now occupies Temer’s post-coup cabinet (and has since implemented a brutal neoliberal programme without the will of the people) includes 4 times defeated PSDB and heirs to ARENA Government of the 65-85 Dictatorship, now living on as “Democratas”, who have failed between them to win a Presidential election since 1998. These are, naturally, the political forces most involved, and most most vocal in their support of the case against Lula and the war on his PT (Workers Party) as a whole. The Brazilian right and their international supporters, although trying to rush through unpopular reforms and privatisationsbefore Temer must leave office, know that they cannot realistically expect to win an election in which the still wildly popular Lula is a candidate, despite decades of intensifying media vilification.

Past articles 2015- present, that Brasil Wire has published on the subject of Lawfare in Brasil can be found assembled here.

There are also enormous concerns about the impartiality of Regional Federal Tribunal 4, or TRF4 which will judge on Lula’s appeal. The tribunal is made up of conservative judges João Pedro Gebran, Victor Laus and the more liberal Leandro Paulsen. Gebran, who is the TRF4’s rapporteur to the Lava Jato task force, is also from Curitiba where it is based, and a personal friend and former university colleague of controversial judge Sergio Moro. There have been some allegations that he is a godparent to Moro’s children or vice versa, which he denies. Lula’s defence team even asked for their respective wedding and children’s birth certificates to corroborate, a request which was refused.

During 2017, overseer of the appeal, TRF4’s President Carlos Eduardo Thompson Flores Lenz, in a brazen breach of conduct, enthused to the media about Moro’s handling of Lula’s case, calling it “impeccable”. The chief of his cabinet also shared various facebook campaigns demanding that Lula be imprisoned.

Historian Fernando Horta has grave doubts about the fitness of TRF4 in its current configuration to judge a case such as that of Lula, with its enormous political ramifications – in short it will decide Brasil’s political future.

There are two things that strike me. One is that none of the 3 TRF4 judges are specialists in criminal law, they are in health, commercial and civil law. The other thing that frightens me is that Gebran, the leader of the Tribunal, is a personal friend of Moro. They went to university together and afterwards both worked in the same court in Western Parana state. And this is unusual in that the first Lava Jato conviction ever occurred in that court. In 2013, there was a motion for clarification filed there which represents the first time a Lava Jato case rose to the district court level. In Brazil, this process is done through lottery and their court was the one which was this case was awarded to. And from that point, all the Lava Jato resources passed through the same court with the same prosecutor/judge.  So, their court was awarded the first Lava Jato case in 2013. In 2014 both of them were transferred. They opened two judge positions in the court, where they knew the Lava Jato case would continue. Gebran, Moro’s personal friend, was transferred into a court where they knew Lava Jato was going to continue. In other words, they chose who would decide on Lava Jato in advance. The court is composed of various groups of three prosecutors. Each one has a president, but the Court (TRF4) itself also has a president who can step in and make a judgement in case of a split decision. If the ruling against Lula is 2 – 1 the court president can step in.  If Lula receives one vote in his favor there is a legal maneuver called an implementation motion in which judgement advances to a decision of the entire court, which if I am not mistaken is made up of 9 prosecutor/judges. But it is the court president (Carlos Eduardo Thompson Flores Lenz) who would coordinate that.

The day of the judgement will be potentially explosive. Despite an effort to outlaw protests; Trade unions, and Social Movements such as MST, are planning to travel to Porto Alegre in support of Lula on January 24th. The PSDB Mayor of the city, Nelson Marchezan Júnior has in response taken the likely illegal step, of directly requesting that Michel Temer make the Armed Forces available to him against the demonstrators’ constitutionally-protected right of assembly.