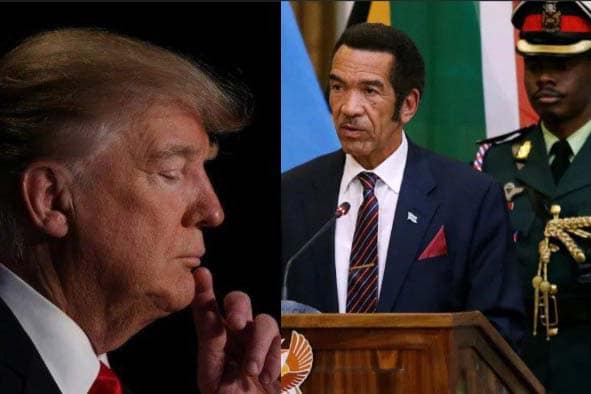 Trump just can’t help letting the cat out of the bag. And boy does his administration have a lot of cats in bags. The line of the Republican Party right wing has been that voter suppression laws are necessary for the integrity of elections. In fact, they are crafted to prevent racial minorities from voting, by making it hard and/or expensive to register. Race drives the policy, not a search for fair elections. Likewise, Trump’s policies on immigration have been portrayed as a matter of law and order. But they aren’t about lawlessness. They are about racial hierarchy.

That is, in some key areas–corporate power, racial hierarchy, militarism– the Trump wing of the Republican Party are Franco or Mussolini fascists in ideology.

Trump could go along with the polite fiction that he is worried about criminality when he addresses immigration. But yesterday according to the Washington Post he launched a tirade at Dick Durbin asking why we have to have people here from shithole countries and why we can’t have more Norwegians. Trump always used to say on the campaign trail that countries are not sending us their best citizens (as if countries are sending anyone at all intentionally). But now he is admitting that the real problem in his view is that it isn’t the best countries that immigrants are coming from.

Trump was badmouthing a whole range of countries including Haiti, El Salvador and some African states, but for the sake of clarity let me honehome in on El Salvador here.

Since Trump is a racist, he thinks that countries get to have poor economic and security situations because of the race of the people that inhabit them. That is silly (and dangerous) as history and social science. Central Americans were among the more civilized people in the world when German tribesmen were raiding the Roman Empire.

The United States has about 1.5 million Salvadorans, some of the people at issue in Trump’s conversations with Durbin and other lawmakers. Most of them came to the United States because of a right wing dirty war against liberals and leftists backed in the 1980s and early 1990s by the US Republican presidency (Reagan and Bush senior) and the US military. The right wing government and military and death squads of El Salvador, with American help, murdered 70,000 civilians in the 1980s, in the course of crushing a leftist insurgency. They included Archbishop Oscar Arnulfo Romero (who will likely end up being made a saint), four American nuns, 800 villagers (children, women, noncombatant men) in El Mozote and environs, and tens of thousands of others. US politicians such as Ronald Reagan, Elliott Abrams, and the joint chiefs of staff and the CIA station chief actively collaborated in this mass killing. The stated purpose was to roll back the Soviet Union (which I doubt was much involved).

The actual purpose was to make the country safe for US corporations, which had virtually run the place. United Fruit owned 80% of the banana crop in the early 20th century along with much of the prime land. Then came the rise of the coffee oligarchy. The International Land Coalition notes,

In El Salvador, the history of land ownership has been marked by coffee cultivation. After production of that crop peaked at the end of the 19th century, the Salvadoran oligarchy of the period concentrated land ownership and dispossessed campesino and indigenous peoples of their ancestral lands. During the first half of the 20th century, the alliance between the military government and the United States went hand-in-hand with landed power linked to coffee cultivation. In 1971, the Agricultural Census identified the persis-tence of an unequal distribution of productive land in the country, with 0.3% of owners owning real estate of more than 200 hectares, which represented 28.2% of the total land area, while 92.5% of owners had real estate of less than 10 hectares, representing 27.1% of the country’s total surface area.

Thus, the US corporate shaping of the country’s political economy had left it with a small landlord class that owned most of the good land (a common colonial outcome) and millions of impoverished sharecroppers, and as even right of center analysts recognize this class conflict fueled much of the civil war. But it was also fueled by the sheer viciousness of the government death squads, which weakened the otherwise positive effect of the land reform instituted in the 1980s.

The Reagan civil war in El Salvador provoked massive out migration, to Honduras and to the United States. Many Salvadorans got citizenship in the 1980s via the 1986 congressional amnesty.

In the 1990s, very large numbers of Salvadoran refugees were deported from the United States. The war-racked economy could not absorb them, and some of them founded Mara Salvatrucha (MS-13) and the 18th Street Gang which became major criminal cartels that Trump now complains about endlessly. (They are a big problem, especially in El Salvador where they have a support base of 8% of the country, but very few of the 16,000 murders a year in the US are committed by them).

In the early 2000s about 200,000 Salvadoran refugees from an earthquake were given Temporary Protected Status. They have high rates of employment and are raising 275,000 U.S.-born children.

So now, having messed up their country, in part for the sake of US corporate greed and American hegemony, the US president is declaring them to be from a “shithole” and is set to deport all 200,000 of the adults, raising the question of what will happen to a quarter of a million American children that they are raising.

The Crisis Group is deathly afraid that the Salvadoran-American children, on being sent forcibly from their country of birth to a foreign land and left without resources are jobs, will be recruited by … MS 13.

By the way, the current government of El Salvador, which runs a country the size of Massachusetts with a population of about 6 million, has some achievements despite the severe challenges of pervasive gang violence. Poverty has been significantly reduced in the past decade, leading to a lower gini coefficient and one of the more equal societies in Latin America. The environmentally conscious government has banned predatory metals mining, against which villagers had been protesting. But one of the country’s big assets economically has been remittances from workers abroad, into which Trump is about to take a big bite by deporting 200,000 of them from the US. And economic growth, at 2% a year, was already among the lowest in the region and is one of the reasons for the ongoing violence.

Immunization rates have also increased from 76 percent in the 1990s to 93 percent in 2016. Similarly, the share of the population with access to improved water sources increased from 79 percent to 89 percent, and the share with access to improved sanitation expanded from 56 percent to over 95 percent during the same period. In education, both access (particularly at the primary level) and literacy rates have increased…

Crime and violence are still an enormous problem. If Trump wanted less immigration from El Salvador he could get it by directing some productive investment to that country much more efficiently than throwing people out of their homes of 20 years.

One short answer to Trump’s question about Norwegians (and could you get more American Nazi Party than that preference?) is that Norwegians are wealthy and have a much better run country than the US and they mostly have no particular reason to leave home. It isn’t the nineteenth century any more, Donald. The US takes in about a million legal immigrants every year. In the past two decades roughly 61,000 a year have come from Europe. And Norway ain’t in the picture.

The alternative to taking in immigrants is to shrink demographically, as Japan is doing and as Germany was doing before the recent change in immigration policy. Urban educated people don’t want a house full of children usually, and so the Japanese are not replacing themselves, and nor would Americans without immigration. A big shrinkage of the population of the sort in which Japan is engaged is an unprecedented social experiment. Who will support the growing ranks of the elderly and retired? Who will build new buildings? What will happen to property prices as houses and schools empty out? Who will serve in the military? Who will invent new technology? Wouldn’t the country become weak economically and militarily and perhaps prey for a younger, more dynamic neighbor? And, no, Trump, Norway is not going to save you from all that. Salvadoran Americans might, if you let them.