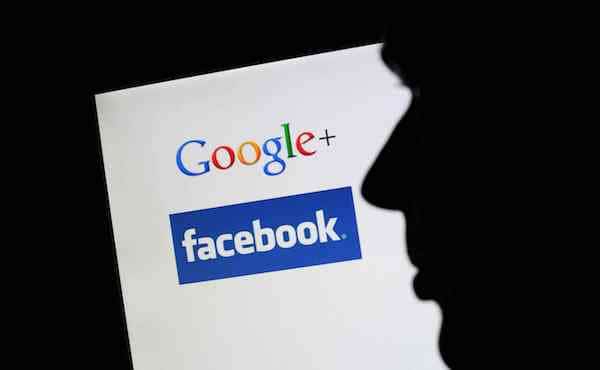 An ilustration shows the silhouette of a man in front of a monitor, showing the logos of the social network Google+ and Facebook in Hanover, Germany, 21 September 2011. After Google+ had opened for certain users, now it can be used by everyone. Photo: JULIAN STARATENSCHULTE -ALLIANCE-INFOPHOTO

Behind the backs of the U.S. and world populations, social media companies have built up a massive censorship apparatus staffed by an army of “content reviewers” capable of seamlessly monitoring, tracking, and blocking millions of pieces of content.

The character of this apparatus was detailed in testimony Wednesday from representatives of Facebook, Twitter, and Google’s YouTube before the United States Senate Committee on Commerce, Science, and Transportation, chaired by South Dakota Republican John Thune.

The hearing was called to review what technology companies are doing to shut down the communications of oppositional political organizations. It represented a significant escalation of the campaign, supported by both Democrats and Republicans, to establish unprecedented levels of censorship and control over the Internet.

Armed with increasingly powerful artificial intelligence systems, these technology companies are free to remove and block the communications of their users at the behest of the government, in a seamless alliance between Silicon Valley and the major U.S. spy agencies.

Monika Bickert, head of Global Policy Management at Facebook, told lawmakers that the social media giant now employs a security team of 10,000 people, 7,500 of whom “assess potentially violating content,” and that, “by the end of 2018 we will more than double” the security team.

Bickert pointed to the growing use of artificial intelligence to flag content, saying Facebook does not “wait for these… bad actors to upload content to Facebook before placing it into our detection systems,” bragging that much of the “propaganda” removed from Facebook “is content that we identify ourselves before anybody” else has a chance to view it.

She added that Facebook has partnered with over a dozen other companies to maintain a blacklist of content, based on “unique digital fingerprints.” This means that if a piece of content, whether a video, image, or written statement, is flagged by any one of these companies, it will be banned from all social media. This database now includes some 50,000 pieces of content and is constantly growing, officials said.

In other words, the technology giants have created an all-pervasive system of censorship in which machines, trained to collaborate with the CIA, FBI, and other U.S. intelligence agencies, are able to flag and block content even before it is posted.

Juniper Downs, global head of Public Policy and Government Relations at YouTube, likewise boasted that Google uses “a mix of technology and humans to remove content,” adding that YouTube relies on a “trusted flagger program” to provide “actionable flags” based on the flaggers’ experience with “issues like hate speech and terrorism,” words that imply that these “trusted flaggers” are connected to U.S. intelligence agencies.

“Machine learning is now helping our human reviewers remove nearly five times as many videos as they were before,” Downs said, adding that Google’s censorship machine is virtually automated. She said that this year there will be “10,000 people across Google working to address content that might violate our policies.”

Downs declared that since June YouTube has “removed 160,000 videos and terminated 30,000 channels for violent extremism.” The company has “reviewed over two million videos” in its collaboration with “law enforcement, government,” and “NGOs.”

Downs stated that Google is actively engaged in promoting what she called “counter-speech,” that is, the promotion of propaganda narratives. She also pointed to Google’s Jigsaw program as deploying “targeted ads and YouTube videos to disrupt online radicalization,” and “redirecting” users to content that Google approves of.

The hearing also featured the testimony of Clint Watts, a former FBI official, former U.S. Army officer, fellow at the German Marshall Fund of the United States, and a leading promoter of social media censorship.

Watts presented the hearing with an unhinged justification for what these massive powers might be used for, in a hypothetical scenario he dubbed “Anwar Awlaki meets PizzaGate.”

“The greatest concern moving forward,” he said, “might likely be a foreign intelligence service, posing as Americans on social media, infiltrating one or both political extremes in the U.S. and then recruiting unwitting Americans to undertake violence against a target of the foreign power’s choosing.”

In this formulation, social opposition, what he calls the “political extremes,” including left-wing politics, is the product of foreign intervention and therefore treasonous. It is also defined as “terrorist” in content and therefore criminal.

Watts expressed extreme fear over the widespread growth of opposition to the policies of U.S. imperialism. He arrogantly decried, “Lesser-educated populations around the world predominately arriving in cyberspace via mobile phones will be particularly vulnerable to social media manipulation.”

The content of Thursday’s testimony points the far-advanced preparations for the establishment of police state forms of rule.

The effort to control speech online is driven by a ruling elite that is immensely fearful of social opposition. Amid growing social inequality and the ever-mounting threat of world war, broad sections of the population, and in particular the working class, are increasingly disillusioned with the capitalist system. Having no social reform to offer, the ruling elites see censorship as the only means to prop up their rule.

Given the explosive content of the statements made at Thursday’s hearing, it is extraordinary that they received no significant coverage in either the print or broadcast media.