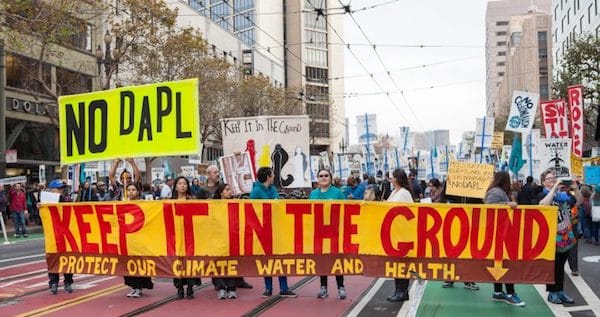 Last March, the NLG shared an overview and analysis of the wave of anti-protest legislation sweeping state legislatures across the country. At the time, we were looking at 25 bills proposed in 19 states—all focused on limiting the right to protest or removing liability for harm caused to protesters. One year later, the number of anti-protest bills has reached 58 in 31 states with no end in sight. Nine bills have already been introduced (or-reintroduced) in 2018 alone. Conservative think tanks, private companies, and law enforcement agencies are now openly working with Republican lawmakers to crack down on dissent, chill the right to protest, and increase penalties for demonstrators and the organizations that support them. It is no coincidence that these bills have flourished since the increase of protests after the election of Donald Trump, or that they target environmental and racial justice movements whose messages are garnering media attention and public support.

While the first round of bills came from individual lawmakers operating without any clear indication of organization or strategy, newer bills are following explicit model policies laid out by conservative groups like the American Legislative Exchange Council (ALEC) and the Goldwater Institute (both funded by the Koch network). More recent bills have also been openly drafted or supported by private corporations such as Energy Transfer Partners (the company behind the Dakota Access Pipeline) and state Departments of Homeland Security. While 22 of these bills have been defeated or sent back to committee since 2016, we are now seeing their re-introduction in 2018. Eight bills have already passed and become law in North Carolina, North Dakota, South Dakota, Oklahoma, and Tennessee. Finally, 28 bills are currently pending in state legislatures. With more legislation of this kind introduced every month, it is imperative to expose the interest groups behind these bills and to organize at the state and national level to prevent more from becoming law.

The first round of anti-protest legislation introduced in 2016 and 2017 produced mixed results. Many of the bills were so poorly written or so blatantly unconstitutional that they were defeated within a short period of time. Bills calling for the removal of driver liability for killing protesters, using racketeering laws to punish protesters, trying to drastically redefine the meaning of “riot,” or challenging the right to picket mostly failed right out of the gate. However, conservative lawmakers have learned from their early mistakes, and are now re-introducing some of these bills in stronger revised form this legislative season. New bills are also emerging modeled on policies devised by right-wing organizations and libertarian think tanks—specifically, legislation related to “critical infrastructure” and “campus free speech.”

In January 2018, ALEC formalized a new model policy that had been introduced at its annual meeting last December—The Critical Infrastructure Protection Act. This policy draws on two bills passed last year in Oklahoma that criminally penalize and fine anyone trespassing on “critical infrastructure,” and prescribe criminal penalties and financial liability for any “conspiring organizations” that assist protesters. Drafted by ALEC’s Energy, Environment and Agriculture task force, this policy is a thinly-veiled attempt to stop protesters from interfering with fossil fuel extraction infrastructure, including oil pipelines, petroleum refineries, liquid natural gas terminals, and railroads used to transport oil and gas. A week after the finalization of this model policy, legislators in Ohio and Iowa introduced “critical infrastructure” bills. Both of these states are currently home to major pipeline projects owned by Energy Transfer Partners (ETP), who assisted in the drafting of legislation. These kinds of bills are clearly an attempt to address the successes of environmental and Indigenous activists who have pushed back against projects like the Dakota Access Pipeline.

New bills concerning “critical infrastructure” are cause for alarm for several reasons. First, a key component of these bills is the attempt to redefine and expand the meaning of terms like “terrorism,” “sabotage”, and “trespass” to allow prosecutors to punish more people for a broader range of activities. The most recent round of ALEC-inspired bills introduce a new felony, “critical infrastructure sabotage,” while a similar bill in Pennsylvania called for the creation of a new category of felon, the “critical infrastructure facility trespasser.” Furthermore, these bills aim to penalize organizations that support protesters by holding them “vicariously liable” for damage undertaken by individuals. Based on the myth of the “paid protester,” these bills seek to punish supportive organizations with fines of up to 10 times the amount paid by an alleged trespasser. Moreover, because what counts as a “conspirator organization” remains undefined, the designation could easily deter groups from assisting environmental protests. Finally, this legislation conflates public and private infrastructure projects, thereby legitimizing ETP’s pipeline as an example of “critical infrastructure.” If these bills are passed unchallenged, a precedent will be set and private oil pipelines could be codified as a public necessity.

Another current trend in model policies drafted and disseminated by right-wing organizations addresses “free speech” in university settings. Over the last year, the increase of white supremacist, homophobic, and ethno-nationalist speakers on college campuses has been at the forefront of conversations around what constitutes “free speech” in this political context. In an attempt to ease the ability of controversial speakers to access university speaking opportunities, the conservative Goldwater Institute and Ethics and Public Policy Institute have created model legislation to increase punishments for individuals and student groups who openly protest these events. Versions of the Campus Free Speech Bill have already been passed and enacted in North Carolina, and are under consideration in Illinois, Michigan, and Wisconsin. Proponents of the bill expect Arizona, California, Georgia, Minnesota, and Wyoming to consider similar legislation soon. A federal higher-education reform bill currently moving through Congress also draws on the language of free speech to counter what is perceived by Republican lawmakers as antagonism toward conservative ideas in academia.

The state-level model policy explicitly prevents university administrators from refusing to invite speakers (“no matter how controversial”) and imposes mandatory disciplinary sanctions—including suspension and expulsion—for students or others who interfere with the “free speech rights” of speakers. According to the authors of the model bill, their interest is merely to ensure that restrictions on campus demonstrations are viewpoint and content neutral. However, given that this policy was drafted following the success of protests against a series of openly xenophobic far-right speakers such as Milo Yiannopoulos and Richard Spencer, its neutrality is questionable. This “weaponizing of free speech” by the far right has been criticized by academics, activists, and legal scholars who challenge the assumption that everyone is entitled to voice their opinion publicly, no matter how ungrounded, factually incorrect, or inflammatory their position might be. The ideal of free speech as the right of anyone to say anything under any circumstances is being confused in these bills with the more limited legal protections of free speech.

While the model legislation being promoted by conservative think tanks claims to be designed to abstractly protect all speech on campus, the reality is that progressive, radical, and liberal professors are increasingly under attack from far-right groups. For example, the Professor Watchlist created by Turning Point USA (TPUSA) lists academics who “advance a radical agenda” in the classroom and encourages students to report their professors. This has resulted in several faculty members becoming the targets of malicious campaigns. Describing itself as the “student movement for free markets and limited government,” TPUSA is a nonprofit group funded by Republican politicians and conservative mega-donors. Any academics who challenge their libertarian message are apt to be singled out for harassment, threats, and even the loss of their jobs. Yet protections for left-leaning professors or sanctions for the students who harass them are absent from the new model policy, even as protesters of hateful speakers risk serious consequences.

While model policies regarding the protection of critical infrastructure and campus free speech may initially seem unconnected, a deeper look reveals that the same interest groups are behind both sets of legislation. The conservative and libertarian think tanks and policy organizations drafting these model bills (along with their funders) are openly supportive of the deregulation of fossil fuel companies as well as the work of academics who push a libertarian agenda of reduced government power and free markets. Those who are committed to challenging anti-protest legislation must consistently expose these groups and the strategic interests behind these bills.

Civil liberties groups are already actively contesting the unnecessary and unconstitutional nature of such legislation. The wave of anti-protest legislation brought since November 2016 even prompted the United Nations Office of the High Commissioner for Human Rights (OHCHR) to send a letter to the U.S. State Department warning that these bills were “criminalizing peaceful protests.” Regardless, the introduction of new legislation has doubled since this time last year and is likely to continue. The involvement of Koch-funded policy organizations, private corporations with an interest in limiting protest, and state law enforcement agencies is producing legislation backed by more money and influence than earlier bills. Previous examples of “critical infrastructure” and “campus free speech” bills have already been successful, which makes them likely to see legislative victories this season unless there is serious effort to counter the narrative being set up by Republican lawmakers and private corporations.

The impact of this legislation on movement work and on organizations promoting social justice will be dire. Immediate action is needed; many of these bills will become law in the next few months unless there is strong resistance, especially at the state level. Bill trackers assembled by groups like the International Nonprofit Law Center and The Voice Project help to monitor the status of anti-protest legislation and offer steps to educate, organize, and pressure lawmakers state by state. As part of a national coalition to resist this legislation, the NLG will continue to monitor and challenge legislation targeting the right to dissent. The increased wave of anti-protest legislation only confirms the position we advanced last year: protesting has certainly become a threat again.