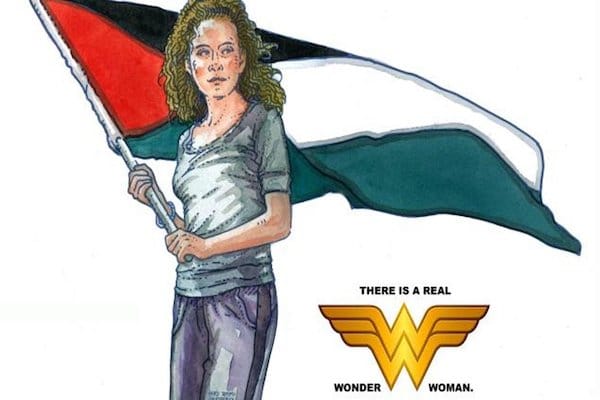 The Irish artist Jim Fitzpatrick of Che Guevara black and red portrait fame has done it again: He has painted a minimalist poster of another iconic leader of her people and of a worldwide liberation movement, this time of an oppressed child who had slapped power with her bare truth. When I read his rationale for painting the new portrait I cried. The man’s pacifism, sincerity, and especially his concern for Ahed Tamimi’s life touched me.

Like Jim Fitzpatrick, I am apprehensive about the 17-year-old Ahed’s life. No one really denies the real reason for incarcerating her: to teach a lesson to other Palestinians, especially the children among them. Fitzpatrick is taking the essence of the lesson, regardless in which direction it will be resolved, to its ultimate conclusion. He is saying this is a model for every native and underclass oppressed child in the world. And he knows how meaningful and dangerous that can be:

“Ahed Tamimi, to me, signifies nobility in the face of oppression. This is a kid, a child,” said Fitzpatrick. “I think I would have been petrified. Wherever she’s getting her courage from, there’s a resonance of it echoing across the world. I’m just a part of it. There are organizations doing more than I could do, but I do think the pen—in my case, the brush—is mightier than the sword.”

Remember, Che Guevara didn’t live to celebrate his portrait. Ahed’s arrest was in direct and clear response to the Israeli public outrage at seeing the iconic Palestinian teenager giving physical expression to her anger with occupation and the occupiers. They had shot at close range and severely injured her cousin and friend, Mohammed Tamimi, and then had come to physically stress their frightening infringement of the rights and freedom of all Palestinians right there at her family’s front yard. She gave expression to her loathing of the occupation by attacking the soldiers with her bare hands.

What moves me most is the realization that right there and then, but for the grace of God, we could have lost Ahed. Members of the Israeli occupying armed forces have killed Palestinian children younger than Ahed for lesser offenses or for no offense at all. Tens, hundreds, if not thousands of times. It is not unknown, even in living memory, for settler colonialists, say in Australia, to have organized native-hunting parties for the fun of it. And Palestinian lives are cheap, we all know. Remember Mohammed Abu Khdeir and the Dawabsheh family? That is why I want to give kudos to those two soldiers who resisted the temptation to put their deadly weapons to use against Ahed and her mother and cousin. Their deaths would have hardly registered a bleb on the rising statistical curve of the occupation’s Palestinian victims. But then those soldiers shouldn’t have been there in the first place. Kudos are reserved for the scores of young Israeli conscientious objectors who resist serving the occupation. There are those in Israel, you know!

What makes my heart sink is the fear of Israel’s lynch mobs: The same crowd that had successfully agitated for her lockup and compelled their occupation army and the entire governmental system behind it to invade the Tamimi’s peaceful home in the dark of night to snatch Ahed and her mother from their bed will be driven crazy by the inspiring image Fitzpatrick has artfully drawn and made available for all to download freely. Israeli crowds had lynched presumed enemies before. That is what scares me about the world class image my fellow pacifist artist has just released. The same fascist agitators who demanded Ahed’s arrest may not shy away from staging a lynching. Perhaps her military judge has a point in claiming that he is banning the media from his military court for Ahed’s sake. Stretch that just a little and you can imagine him justifying her imprisonment for life for her own safety.

“This girl is memorable, her face is memorable, she seems a courageous, dignified girl—she captured my imagination. And I think she’s capturing the imagination of the world. She symbolizes resistance.” 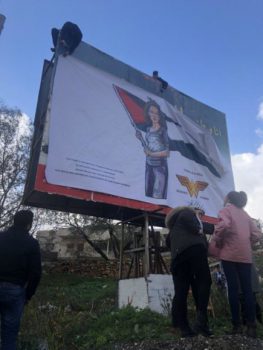 Jim Fitzpatrick image of Ahed Tamimi, inspired by a photo by Haim Schwarczenberg. The billboard was photographed by Manal Tamimi (@screamingtamimi)who lives in the occupied West Bank.

How fully I agree with you, my friend! You dub her “the real Wonder Woman.” She is a symbol of a wonder generation or even wonder generations. You remember all those improbable images from the First Intifada, the image of the child, stone in hand, facing a tank its tracks twice his height and its gun turret four times that. And the children held in place by soldiers while other soldiers swung bricks at their arms to break their bones on orders of their high commander. And the Tamimi boy, Ahed’s brother with one arm in a cast being freed from a soldier’s stranglehold “tooth and nail” by his mother and sister. Then again, the same boy demonstrating with the second arm in a cast.

That was enough to make one of the sanest politicians in Israel go crazy, why wouldn’t the daring of his sister whip up the masses into a frenzy demanding her blond head? No wonder you want the whole world focusing its attention on Ahed as a protective measure. This is the microcosm rendition of the oft repeated human rights axiom that, across the globe, one’s stand on Palestine is the true measure of their humanity. Indeed, sumud—steadfastness—and their instinctive holding onto their homes, land and olives, renders the Palestinians a wonder nation.

That is a worthy note to end on. But please, everyone, keep our Ahed Tamimi in your thoughts and keep her and all the hundreds of imprisoned Palestinian children at the focus of your actions till Israel comes to its senses.