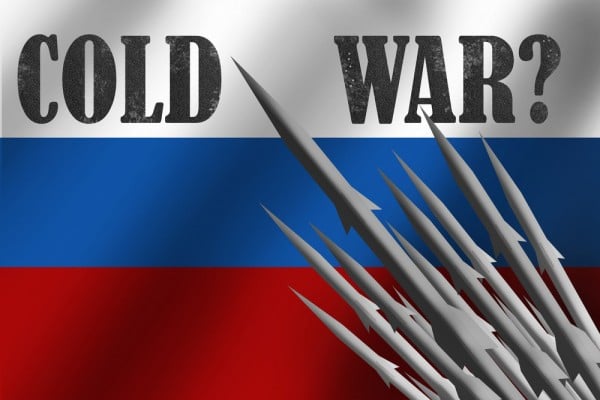 The United States has launched a three-pronged offensive on Russia. First, it’s attacking Russia’s economy via sanctions and oil-price manipulation. Second, it’s increasing the threats to Russia’s national security by arming and training militant proxies in Syria and Ukraine, and by encircling Russia with NATO forces and missile systems. And, third, it’s conducting a massive disinformation campaign aimed at convincing the public that Russia is a ‘meddling aggressor’ that wants to destroy the foundation of American democracy. (Elections)

In response to Washington’s hostility, Moscow has made every effort to extend the olive branch. Russia does not want to fight the world’s biggest superpower any more than it wants to get bogged down in a bloody and protracted conflict in Syria. What Russia wants is normal, peaceful relations based on respect for each others interests and for international law. What Russia will not tolerate, however, is another Iraq-type scenario where the sovereign rights of a strategically-located state are shunted off so the U.S. can arbitrarily topple the government, decimate the society and plunge the region deeper into chaos. Russia won’t allow that, which is why it has put its Airforce at risk in Syria, to defend the foundational principle of state sovereignty upon which the entire edifice of global security rests.

The majority of Americans believe that Russia is the perpetrator of hostilities against the United States, mainly because the media and the political class have faithfully disseminated the spurious claims that Russia meddled in the 2016 elections. But the allegations are ridiculous and without merit. Russia-gate is merely the propaganda component of Washington’s Full Spectrum Dominance theory, that is, disinformation is being used to make it appear as though the U.S. is the victim when, in fact, it is the perpetrator of hostilities against Russia. Simply put, the media has turned reality on its head. Washington wants to inflict as much pain as possible on Russia because Russia has frustrated its plan to control critical resources and pipeline corridors in Central Asia and the Middle East. The Trump administration’s new National Defense Strategy is quite clear on this point. Russia’s opposition to Washington’s destabilizing interventions has earned it the top spot on the Pentagon’s “emerging rivals” list. Moscow is now Public Enemy#1.

Washington’s war on Russia has a long history dating back at least 100 years to the Bolshevik Revolution of 1917. Despite the fact that the U.S. was engaged in a war with Germany at the time (WW1), Washington and its allies sent 150,000 men from 15 nations to intervene on behalf of the “Whites” hoping to staunch the spread of communism into Europe. In the words of British Prime Minister Winston Churchill, the goal was “to strangle the Bolshevik baby in its crib.”

According to Vasilis Vourkoutiotis from the University of Ottawa:

… the Allied intervention in the Russian Civil War.. was a failed attempt to eradicate Bolshevism while it was still weak….As early as February 1918… Britain supported intervention in the civil war on behalf of the Whites, and in March it landed troops in Murmansk. They were soon joined by forces from France, Italy, Japan, the United States, and ten other nations. Eventually, more than 150,000 Allied soldiers served in Russia…

The scale of the war between the Russian Reds and Whites, however, was such that the Allies soon realized they would have little, if any, direct impact on the course of the Civil War unless they were prepared to intervene on a far grander scale. By the end of April 1919 the French had withdrawn their soldiers….British and American troops saw some action in November 1918 on the Northern Front… but this campaign was of limited significance in the outcome of the Civil War. The last British and American soldiers were withdrawn in 1920. The main Allied contributions to the White cause thereafter were supplies and money, mostly from Britain….

The chief purpose of Allied intervention in Soviet Russia was to help the Whites defeat the Reds and destroy Bolshevism. (Allied Intervention in the Russian Revolution, portalus.ru)

The reason we bring up this relatively unknown bit of history is because it helps to put current events into perspective. First, it helps readers to see that Washington has been sticking its nose in Russia’s business more than a century. Second, it shows that– while Washington’s war on Russia has ebbed and flowed depending on the political situation in Moscow– it has never completely ended. The U.S. has always treated Russia with suspicion, contempt and brutality. During the Cold War, when Russia’s global activities put a damper on Washington’s depredations around the world, relations remained stretched to the breaking point. But after the Soviet Union collapsed in December, 1991, relations gradually thawed, mainly because the buffoonish Boris Yeltsin opened the country up to a democratization program that allowed the state’s most valuable strategic assets to be transferred to voracious oligarchs for pennies on the dollar. The plundering of Russia pleased Washington which is why it sent a number of prominent U.S. economists to Moscow to assist in the transition from communism to a free-market system. These neoliberal miscreants subjected the Russian economy to “shock therapy” which required the auctioning off of state-owned resources and industries even while hyperinflation continued to rage and the minuscule life savings of ordinary working people were wiped out almost over night. The upshot of this Washington-approved looting-spree was a dramatic uptick in extreme poverty which intensified the immiseration of tens of millions of people. Economist Joseph Stiglitz followed events closely in Russia at the time and summed it up like this:

In Russia, the people were told that capitalism was going to bring new, unprecedented prosperity. In fact, it brought unprecedented poverty, indicated not only by a fall in living standards, not only by falling GDP, but by decreasing life spans and enormous other social indicators showing a deterioration in the quality of life…..

(Due to) the tight monetary policies that were pursued… firms didn’t have the money to even pay their employees…. they didn’t have enough money to pay their pensioners, to pay their workers….Then, with the government not having enough revenue, other aspects of life started to deteriorate. They didn’t have enough money for hospitals, schools. Russia used to have one of the good school systems in the world; the technical level of education was very high. (But they no longer had) enough money for that. So it just began to affect people in every dimension of their lives….

The number of people in poverty in Russia, for instance, increased from 2 percent to… somewhere between 40 and 50 percent, with more than one out of two children living in families below poverty. The market economy was a worse enemy for most of these people than the Communists had said it would be. It brought Gucci bags, Mercedes, the fruits of capitalism to a few….But you had a shrinking (economy). The GDP in Russia fell by 40 percent. In some (parts) of the former Soviet Union, the GDP, the national income, fell by over 70 percent. And with that smaller pie it was more and more unequally divided, so a few people got bigger and bigger slices, and the majority of people wound up with less and less and less…. (PBS interview with Joseph Stiglitz, Commanding Heights)

So, as long as Russia remained open to the West’s political maneuvering and wholesale thievery, every thing was hunky-dory. But as soon as Vladimir Putin got his bearings (during his second term as President) and started reassembling the broken state, then western elites became very concerned and denounced Putin as an “autocrat” and a “KGB thug.” At the same time, Washington continued its maniacal push eastward using its military catspaw, NATO, to achieve its geopolitical ambitions to control vital resources and industries in the most populous and prosperous region of the coming century, Eurasia. After promising Russian President Gorbachev that NATO would never “expand one inch to the east”, the U.S.-led military alliance added 13 new countries to its membership, all of them straddling Russia’s western flank, all of them located, like Hitler, on Russia’s doorstep, all of them posing an existential threat to Russia’s survival. NATO forces now routinely conduct provocative military drills just miles from the Russian border while state-of-the-art missile systems surround Russia on all sides. (Imagine Russia conducting similar drills in the Gulf of Mexico or on the Canadian border. How would Washington respond?)

Russian Foreign Minister Sergey Lavrov gave an excellent summary of post Cold War history at a gathering of the Korber Foundation in Berlin in 2017. Brainwashed Americans who foolishly blame Russia for meddling in the 2016 elections, should pay attention to what he said.

LAVROV– “Ever since the fall of the Berlin Wall we have shown our cards, trying to do our best to assert the values of equal partnership in international affairs….Back in the early 1990s, we withdrew our troops from Eastern and Central Europe and the Baltic states and dramatically downsized our military capacity near our western borders…
.
When the cold war era came to an end, Russia was hoping that this would become our common victory – the victory of both the former Communist bloc countries and the West. The dreams of ushering in shared peace and cooperation seemed near to fruition. However, the United States and its allies decided to declare themselves the sole winners, refusing to work together to create the architecture of equal and indivisible security. They made their choice in favor of shifting the dividing lines to our borders – through expanding NATO and then through the implementation of the EU’s Eastern Partnership program…

As the Western countries’ elites were implementing a policy of political and economic containment of Russia, old threats were growing and new ones were emerging in the world, and the efforts to do away with them have failed. I think that the main reason for that is that the model of “West-centric” globalization, which developed following the dismantling of the bipolar architecture and was aimed at ensuring the prosperity of one-seventh of the world’s population at the expense of the rest, proved ineffective. It is becoming more and more obvious that a narrow group of “chosen ones” is unable to ensure the sustainable growth of the global economy on their own and solve such major challenges as poverty, climate change, shortage of food and other vital resources….

The latest events are clear evidence that the persistent attempts to form a unipolar world order have failed….The new centers of economic growth and concomitant political influence are assuming responsibility for the state of affairs in their regions. Let me reiterate that the emergence of multipolar world order is a fact and a reality. Seeking to hold back this process and keep the unfairly gained privileged positions is going to lead nowhere. We see increasing examples of nations raising their voice in defense of their right to decide their own destiny….(Sergey Lavrov, Russian Foreign Minister)

The American people need to look beyond the propaganda and try to grasp what’s really going on. Russia is not Washington’s enemy, it’s a friend that’s trying to nudge the U.S. in adirection that will increase its opportunities for peace and prosperity in the future. Lavrov is simply pointing out that a multipolar world is inevitable as economic power becomes more widespread. This emerging reality means the US will have to modify its behavior, cooperate with other sovereign nations, comply with international law, and seek a peaceful settlement to disputes. It means greater parity between the states, fairer representation in global decision-making, and a narrower gap between the world’s winners and losers.

Lavrov offers a vision of the future that all peace-loving people should welcome with open arms.

Admit it: The imperial model has failed. It’s time to move on.