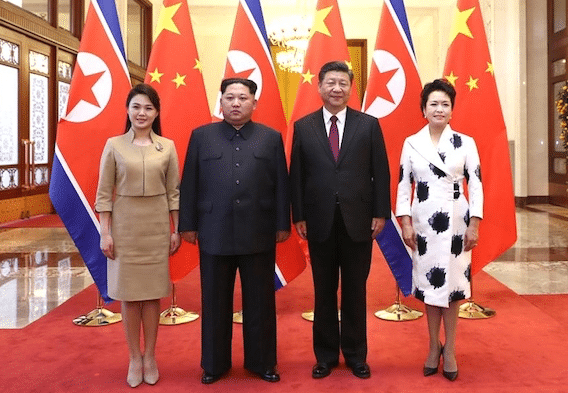 Accepting Chinese President Xi Jinping’s invitation, North Korean leader Kim Jong-un visited China from 25th of this month to the 28th, for the first time since assuming office in 2011. Timed just before Kim’s scheduled meeting with the South Korean President Moon Jae-in the next month, which will be followed by a summit with U.S President Donald Trump—where the prospects of denuclearization is expected to be discussed—this meeting with Xi Jinping, in which Kim has reaffirmed his commitment to denuclearization, has been seen my observers as a crucial diplomatic development.

This reassurance by Kim—coming despite the announcement of the annual U.S—South Korea joint military exercise which the North has been persistently condemning as a preparation for an invasion-has, however, not been without a re-statement of the conditions that North Korea has attached to denuclearization.

“The issue of denuclearisation of the Korean Peninsula can be resolved, if South Korea and the United States respond to our efforts with goodwill, create an atmosphere of peace and stability while taking progressive and synchronous measures for the realisation of peace,” Kim has told Xi, China’s official news agency, Xinhua reported.

Beneath fiery rhetoric, N. Korea has consistently maintained a commitment to Denuclearization

North Korea has consistently maintained that it is willing to eventually give up on all its nuclear weapons if the security threats the state faces is removed, which would require dismantling of U.S ‘nuclear umbrella’, a termination of U.S-South Korea joint military exercises and a significant reduction in American military presence in the region. As pointed out in a previous article, there are currently “100,000 U.S forces operating in the region, with permanent navy bases and bomber aircrafts capable of striking North Korea with nuclear weapons”.

It is not an immediate dismantling of nuclear weapons in North Korea that China is demanding, Zhao Tong, a North Korea expert at the Carnegie-Tsinghua Centre in Beijing, has said, according to Reuters . But it wants to “make sure that a nuclear free Korean peninsula is the ultimate goal.”

But will U.S make way for denuclearization?

In a less-than-friendly gesture, Sarah Sanders, instead of welcoming the development, has claimed an American victory over North Korea. “We see this development as further evidence that our campaign of maximum pressure is creating the appropriate atmosphere for dialogue with North Korea,” she said, speaking on behalf of White House, which seems to imply that Washington believes in arm-twisting North Korea rather than achieving their stated goal of denuclearization by reassuring the isolated state that it faces no threats form U.S, warranting the need to have nuclear weapons.

Aggrieved by this kind of rhetoric U.S has been persistently employing to justify harsher measures against North Korea—at the very time when the North and South Korea are beginning a reconciliation, with Kim Jong-un even committing to give up nuclear weapons—a senior North Korean diplomat had written to the U.N. Secretary General Antonio Guterres early last month, stating that “U.S. authorities are misleading public opinion as if the inter-Korean dialogue is an outcome of their harshest sanctions and pressure, intentionally aggravating the situation”.

Soon after a hope for peace in the Korean peninsula began to glimmer this year after a South Korean delegation paid a visit to the North, where Kim expressed his willingness to discuss denuclearization with U.S President Donald Trump—a proposal Trump accepted to many’s surprise—the annual war games by the joint forces of U.S and South Korea was announced on the 20th of this month, involving 23,700 soldiers from U.S and 300,000 from South Korea.

To the relief of many who feared that this might disrupt the diplomatic breakthrough, Kim’s statement in China is reassuring. However, unilateral disarmament of nuclear weapons, while the U.S continues persist with war-games and maintain in the region such a heavy military presence of both conventional and nuclear force, is unlikely to be acceptable to North Korea, about 30% of whose population was wiped out when U.S invaded the country last time.

John Bolton, the hardliner appointed as the new national security advisor of U.S, has recently stated that Trump, in his meeting with Kim scheduled this May, should “make the point that he’s not there to waste time and that we expect real denuclearisation, not talks about talks about denuclearisation.”

As the scheduled meeting approaches closer, “the conceptions of denuclearisation (held by the two antagonistic countries) seem to be diverging rather than converging,” warned Adam Mount, a senior fellow at the Federation of American Scientists.

If North Korea sets as a condition for denuclearization the removal of U.S security apparatus it perceives as a threat in the region, there is “not a chance it’s going to happen,” Vipin Narang, an Associate Professor at MIT’s Security Studies Programme has said.