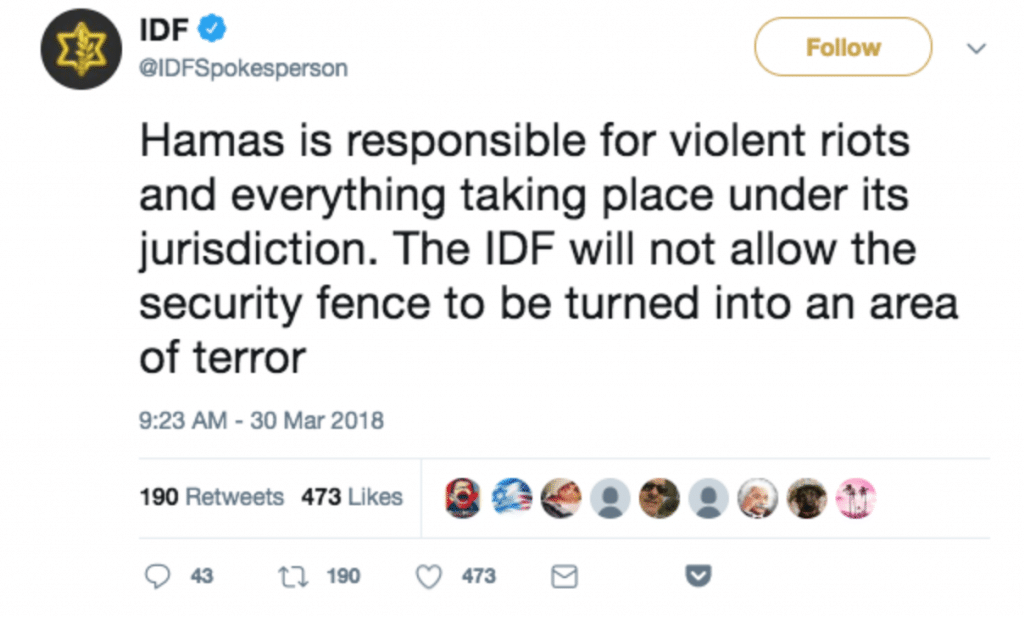 This the reason for seventeen dead and over a thousand injured.

This is the reason for the number of dead during the first days of the long-planned protests at the Israel-Gaza border. This is the reason for kids being shot in the back as they flee the Israeli Defence Force. The IDF is operating under what the human rights agency B’TSelem calls “illegal open fire regulations“. It means that the IDF assumes the right to use lethal force against any Gazan approaching the borders of the strip. So, snipers are deliberately and as a matter of policy firing into large groups of unarmed protesters, killing and injuring them.

Although it is being deployed in this instance to break the protests, the policy has been in place for a while. Over the last year, nineteen people had been shot dead, including fishermen, protesters, a farmer, and a few teenagers trying to get into Israel without a permit.

Beginning on Friday, the scale and speed of killing abruptly shot up, as tens of thousands of Gazans arrived for the six week “tent city” protest in support of the refugees’ right of return.

The IDF is now threatening to escalate the military crackdown on a protest expected to last for six weeks. This is consistent with an overwhelming pattern wherein the Israeli military complains about terrorism, a term it tends to use with little discrimination or precision, and then uses lethal force to crush civil society activism.

Consistent with their careful positioning of the protests as a “combat zone“, the IDF spokesperson’s Twitter feed is lurid with barbarous memes and posts designating the protests an “area of terror”. As though the Bermuda Triangle had just opened up next to the border.

The evidence being offered to justify the massacre is notable, not just for being thin, but for being absolutely unhinged. The unreality of this publicity stream is amazing to behold:

This is what Hamas claims to be a peaceful protest pic.twitter.com/zDPppXdWVd

Hamas operatives camouflage themselves among civilians, turning a protest from peaceful to an area of terror pic.twitter.com/t37BRBQK9U

The implied conspiracy theory about Hamas secretly orchestrating the protests and everything that happens in them for its own Satanic ends, is what gives a spurious coherence to these bizarre charges: protesters throwing stones, teenagers burning tires, a kid with a toy gun, all in the same “area of terror”.

Even the stories about “terrorists” are, if you think about it, perverse citations. They’re having it both ways. As Gideon Levy writes in Ha’aretz, you cannot despatch sharpshooters to fire at hundreds of civilians and then label as “terrorists” a couple of Palestinians who return fire at the soldiers massacring civilians. Likewise, you can’t found a state on military repression and then complain when, among those protesting it are members of a political and military insurgency against the repression.

Jacqueline Rose, writing about the role of fantasy in politics, pointed out that Israel is one of those states whose existence is, in the words of the liberal-Zionist Amos Oz, “a dream come true”. This can be taken in many different ways, but one of them is that the logic of dreamwork has come to structure daily political reality (as, when does it not?).

But what sort of dream is it? It is a dream wherein passions flow, says Rose, “not only from the people to the homeland but also and just as powerfully the other way”. Israel yearns for the “return” of Jewish people, wherever they are, to this dreamed-of, dreamed-up, almost dreamed-into-existence home. But precisely for that reason cannot countenance the return of refugees who, among those murdered in the Nakba, bore the costs of that dream.

For Israel to concede Palestinian statehood would mean, argues Rose, that “the nation would lose all inner rationale and psychically collapse in on itself”. That would amount to the destruction of “the Jewish state”, not as a political reality, but rather as a fantasy. This suggests that it isn’t just cynicism which drives the untrue accusations of antisemitism, which have routinely appeared with new ferocity whenever global criticism of Israeli actions peaked, but ideology.

This sort of fantasy becomes particularly dangerous when it is attached to the logic of what Martin Shaw calls ‘degenerative war’. In those contexts, not uncommon in recent warfare, the divide between combatant and civilian breaks down, and whole civilian communities suspected of ‘harbouring’ evildoers are targeted. In the scale atrocities that can ensue, individual massacres are certainly not the worst.

The drive to what Baruch Kimmerling calls “politicide” is often characterised by careful re-definitions of the category of ‘civilian’. During the 2006 invasion of Lebanon, whole civilian housing complexes were dubbed ‘Hezbollah strongholds’. Villages were designated “military bases”. This was what became known as the ‘Dahiya doctrine‘, and it was subsequently applied with brutal clarity in Gaza. And it is increasingly made glaringly obvious that this process is shadowed by racist, Orientalising fantasies of Palestinians, and by fantasies of ethnic cleansing and worse. As though, no barbarity could really be sufficient to punish the Palestinians for existing.

The figment of an “area of terror” at the border, so clearly pitched at the register of fantasy, saturated with racist projections, is now being invoked to justify a massacre, and potentially a full-blown military incursion. Where does this dream end, and what would waking up look like?