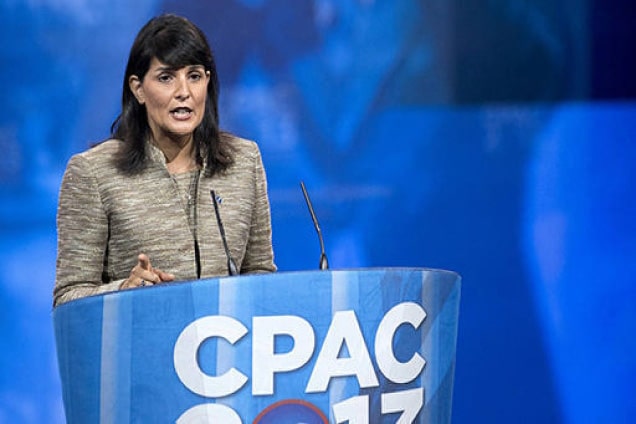 On February 3, 2018 a group of about 200 people, mostly men belonging to the Republican Hindu Coalition (RHC), held a rally in Washington DC with an unequivocal endorsement of Trump’s xenophobic anti-immigrant agenda, and called for a “merit-based” immigration system, which would impose additional fees for Indian H1-B applicants (to secure work permits in the U.S.). They held signs and chanted slogans voicing enthusiastic support for building a wall along the U.S. Mexico border, and drew explicit and implicit connections between the politics of the Indian Prime Minister Narendra Modi’s repressive and anti-Muslim Hindu nationalist, (also known as Hindutva) and Trump’s white supremacist anti-immigrant administration.

In response to the economic, political and physical violence engendered by policies since the 1990s and with the threat of a fascist moment intensified under Trump, defensive struggles are proliferating across the U.S. as Black Americans lead the struggle against police brutality and racism; teachers in West Virginia and Oklahoma push back against neoliberal assaults on working people; school children in Florida demand an end to the right-wing gun agenda; Native Americans, Black communities, ecological activists and radical public intellectuals defend the fundamental right to water, health and life; and immigrant workers across the country defend the human rights and dignity of those targeted for repression and expulsion.

In such a political climate how do we understand RHC’s support for Trump and its brazen and contemptuous disregard for the real issues of concern to immigrants today—racism, xenophobia and accelerated multi-pronged attacks on their rights to work and live with dignity? And do we accept the arrogant claims of this organization, founded in 2015 along the lines of the anti-Palestinian pro-apartheid Jewish Republican Coalition, to not only speak on behalf of all Indian immigrants, but also propose and negotiate terms of profound implications with the U.S. state?

The antics of the RHC are not terribly shocking if we consider the social and historical context of reactionary politics among the vocal, largely upper-caste and relatively well-to-do classes of Indians and Indian Americans under the tutelage of Hindutva (right-wing Hindu nationalism) in India. The growth of Hindutva in the U.S. over the last three decades has been well documented by Indian American research and activist collectives. For example, organizations started by U.S. based Hindutva activists created a 503(c) charity called the India Development and Relief Fund (IDRF) to funnel over $3.2 million to Hindutva organizations in India. Many of the latter organizations led the genocidal violence unleashed on the Muslim population in the state of Gujarat in 2002.

“Yankee Hindutva”, as some have described it, is a thriving movement manifested in various organizations such as Hindu American Foundation, Vishwa Hindu Parishad (World Hindu Council) America, Overseas Friends of the BJP (the current ruling party in India) and others. They actively work with and have cultivated close ideological and organizational ties with various Hindutva organizations in India. The goal of solidifying support in the U.S. for the current Prime Minister of India, Narendra Modi, extended further into efforts by the Hindu American Foundation, to create a new platform for direct lobbying with U.S. politicians. Subscribing to an exclusive “Hindu American” identity, they have openly supported Narendra Modi and various leaders of Hindutva who have either been convicted of, or openly incited violence against Muslims and lower castes in India. RHC, led by Shalabh “Shalli” Kumar, the man behind Hindus for Trump, is the most recent and visible inductee of the Yankee Hindutva nexus.

Indian Americans’ susceptibility to conservative politics in the U.S. is itself a contradictory affair—on the one hand they have largely voted Democrat, but have publicly remained ambivalent about racial politics in the country. One key element of this ambivalence is the question of affirmative action and meritocracy.

A large proportion of Indian immigrants have benefited from caste privilege, and social and economic opportunities denied to generations of communities consigned to so-called “lower caste” status. Yankee Hindutva’s support for Trump’s “merit-based” immigration system mirrors its opposition in India to affirmative action (known as “reservations”) in employment and education institutions designed to alleviate the oppression and exploitation suffered by “lower caste” Indians. Ignoring Dalit (lower castes) and the Indian Left’s demands for affirmative state action, the ruling Modi government has drastically reduced public allocations for Dalit students in higher education, targeted Dalit and minority student leaders and organizations for repression, and maintains a climate of fear and intimidation on college campuses throughout India. Further, it has emboldened violent and fatal public assaults by Hindutva organizations on Dalits and Muslims throughout India.

The current public respectability achieved by xenophobic and racist ideas driving Trump’s immigration and social agenda has emboldened followers of Yankee Hindutva to reject their previous timid ambivalence. Within the immigrant Indian community they are swathed in affluence and privilege. Privilege on account of their caste status when they migrated from India, having carefully nurtured it under the umbrella of multicultural citizenship and the racist model-minority myth. And affluence on account of their lucrative employment in some of the most high-paying jobs in the U.S., itself a product of their caste privilege.

The model minority conceit, born in the racialist juxtaposition of Indian immigrants as being more loyal, hard-working citizens than Black Americans, has produced the likes of rightwing public figures like Bobby Jindal, Shalli Kumar and Nikki Haley. But as Yankee Hindutva attempts to negotiate a place in the white supremacist vision of the Trump administration, the struggles of marginalized people has also inspired leftists and progressives like Kshama Sawant, Ravi Raghbir and Tithi Bhattacharya.

Progressive and leftist South Asian activists and organizations in the U.S. have responded to the needs of immigrants facing state repression in the form of detention and/or deportation, or assaults on their wellbeing at the hands of a racist police force and city administrations targeting their rights as workers. They have been deeply immersed in strategic work and solidarity building over decades with a host of allied leftist and anti-racist organizations building on a history of Black and South Asian solidarity in the U.S., Caribbean and South Africa. Despite the arrogant claims of RHC and Yankee Hindutva, it does not speak for scores of Indians and Indian Americans who are building on past and new solidarities with democratic struggles towards inclusion, access, dignity and the goal of building a better future for all children.

Sirisha Naidu is an economist at Wright State University.