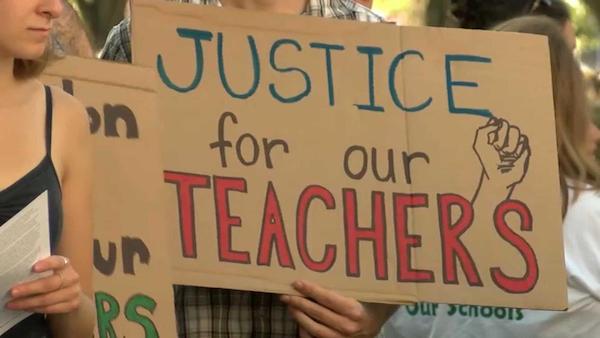 While those at the top of the income pyramid continue to celebrate economic trends, the great majority of working people continue to struggle to make ends meet. However, teacher victories in West Virginia, Oklahoma, and Arizona demonstrate that broad-based sustained workplace organizing, labor-community solidarity, and importantly a willingness to strike, can change the balance of power in favor of working people and produce meaningful gains.

West Virginia, Oklahoma, and Arizona are all considered red states, with legislatures that have aggressively reduced taxes on the wealthy and corporations, slashed spending on social programs, and gutted union rights for public sector workers by denying them the right to collectively bargain or strike. Yet, after months of careful workplace and community organizing, West Virginia teachers launched a nine-day strike in February that shut down the entire state’s public school system and won them and all other state workers a 5 percent salary increase and a government promise to convene a task force to find ways to reign in worker health care costs.

Oklahoma teachers followed with their own workplace and community actions and a nine-day statewide strike in early April. The day before the start of the strike the legislature hurriedly approved salary increases of $6000 for teachers and $1250 for support staff, and days later a modest $40 million increase in the education budget. This wasn’t enough to convince the teachers to call off their strike; they had demanded a raise of $10,000 for teachers and $5,000 for support staff, $200 million for increased school funding, $213 million for state employee raises, and a $255.9 million increase in health care funding. However, after the head of the state’s largest teacher’s union called for an end to the walkout, saying that it had achieved all it could, teachers, many reluctantly, agreed to return to work without further gains.

Arizona teachers have participated in workplace actions and demonstrations to press their demand for salary increases for themselves and other education workers and a significant boost to the education budget. The governor, hoping to avoid a threatened strike, announced a plan to give teachers a 20 percent raise by 2020, including a nine percent raise this year. The teachers weren’t satisfied: they didn’t find the governor’s plan to raise their wages financially realistic, they wanted raises for all school workers, and they wanted school funding returned to its 2008 level. In a statewide vote of teachers and other school personal, approximately 80 percent voted to walk out on April 26 if their demands were not met. This would be Arizona’s first statewide walkout.

While the gains won in these states are not sufficient to reverse decades of concerted action by state legislatures to undermine public services and public workers, they are impressive nonetheless and should encourage a renewed focus on and support for workplace organizing and collective action.

These victories did not come easily. Teachers were willing to take the bold step of engaging in a technically illegal strike for at least two main reasons. The first is that they have endured terrible working conditions for years, conditions which also weighed heavily on those they teach. For example, per student instructional funding in Oklahoma was some 30 percent below its 2008 level. Some 20 percent of the state’s school districts were forced by financial pressures to adopt four-day school weeks. Textbooks remain in short supply and out of date. Classes are so overcrowded that many students must sit on the floor. And the state’s public school teachers and staff had not received a raise in ten years; pay was so low that many have been forced to work multiple jobs.

And adding insult to injury is the fact that state legislatures in all three states have slashed spending on education and teacher salaries in order to finance massive tax cuts for corporations and the wealthy. A case in point: The Arizona legislature has cut approximately $1 billion from schools since the 2008 recession while simultaneously reducing taxes. No doubt the fact that such regressive policies were often supported by both Democratic as well as Republican lawmakers, as in Oklahoma, also encouraged teachers to embrace direct-workplace action rather than more traditional lobbying to force needed legislative changes.

The second reason is that strike votes were proceeded by months of organizing that informed and created bonds of solidarity. West Virginia was a model. Forums were held in most schools which educated and also encouraged local leadership development, teachers joined by other school workers engaged in ever more militant school-based actions, and eventually strike votes were held in every school with the participation of all teachers and staff regardless of union affiliation. Teacher activists, most of whom were rank and file union activists, used a variety of methods, including social media, to build a strong state-wide network to coordinate their work. The strike was called only when it was clear that it had the support of the overwhelming majority of teachers, support staff, and school bus drivers.

This strong rank and file base was key to the strike’s success. After five days, the Governor and teacher union leaders announced that a deal had been reached and called for an end to the strike. However, the rank and file refused. They held their strike until the state legislature actually approved an agreement that met their demands.

The Oklahoma strike was less successful in part because a weaker union movement meant fewer trained labor activists. This made it harder to engage in school-by-school organizing and forge a strong state network. As a consequence the strike was launched without the same level of workplace organization and connection to other education workers such as support staff and bus drivers. And as a result, it made it much harder for rank and file teacher activists to effectively oppose the teacher union leadership’s call to settle for what was won and to return to work. It is likely that Oklahoma law, which requires that 75 percent of the legislature vote in favor of any revenue hike, also contributed to teacher willingness to end the strike.

Arizona teachers are now preparing to strike. Teachers in Kentucky and Colorado recently engaged in one day walkouts, shutting down schools and demonstrating at their respective state capitals to protest low wages and inadequate education budgets. Discussions continue in both states about the possibility of renewed strikes to win their demands. We should be studying as well as supporting all their efforts.

These teacher strikes are important and have deservedly won widespread community support. They have raised the salaries of teachers and other education workers, thereby helping their schools attract and retain talented people. They have also boosted state education budgets, which benefits the broader community, especially students and their parents. They also shine a spotlight on the destructive consequences of past tax giveaways to the rich and powerful and the need for new progressive sources of tax revenue. Finally, they show that workers can effect change, improving their own living and working conditions, even under extremely hostile conditions, through sustained workplace organization and audacity.