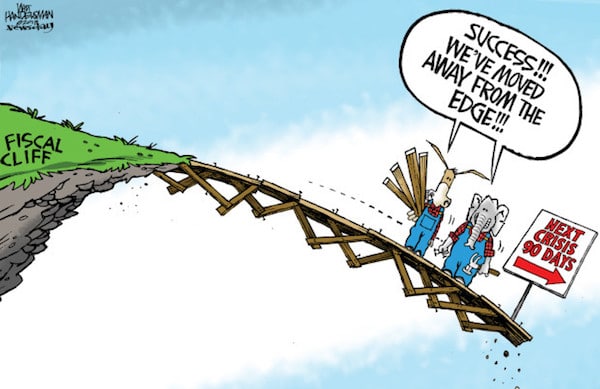 These are supposed to be the good times—with our current economic expansion poised to set a record as the longest in U.S. history. Yet, according to the Federal Reserve’s Report on the Economic Well-Being of U.S. Households in 2017, forty percent of American adults don’t have enough savings to cover a $400 emergency expense such as an unexpected medical bill, car problem or home repair.

The problem with our economy isn’t that it sometimes hits a rough patch. It’s that people struggle even when it is setting records.

The expansion is running out of steam

The likelihood that the expansion will break the prior record is consistent with our long-standing view that the combination of a deep recession and an initially slow recovery has set us up for an unusually long cycle.

The Goldman Sachs model, according to Domm:

shows an increased 31 percent chance for a U.S. recession in the next nine quarters. That number is rising. But it’s a good news, bad news story, and the good news is there is now a two-thirds chance that the recovery will be the longest on record. . . . The Goldman economists also say the medium-term risk of a recession is rising, “mainly because the economy is at full employment and still growing above trend. 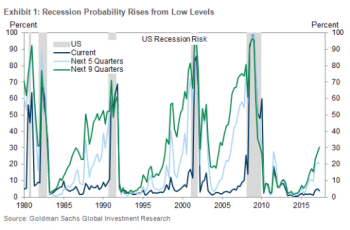 The chart below highlights the growing recession risk based on a Goldman Sachs model that looks at “lagged GDP growth, the slope of the yield curve, equity price changes, house price changes, the output gap, the private debt/GDP ratio, and economic policy uncertainty.”

Sooner or later, the so-called good times are coming to an end. Tragically, a large percent of Americans are still struggling at a time when our “economy is at full employment and still growing above trend.” That raises the question: what’s going to happen to them and millions of others when the economy actually turns down?

Living on the edge

The Federal Reserve’s report was based on interviews with a sample of over 12,000 people that was “designed to be representative of adults ages 18 and older living in the United States.” One part of the survey dealt with unexpected expenses.  Here is what the report found:

Approximately four in 10 adults, if faced with an unexpected expense of $400, would either not be able to cover it or would cover it by selling something or borrowing money. The following figure shows that the share of Americans facing financial insecurity has been falling, but it is still alarming that the percentage remains so high this late in a record setting expansion. 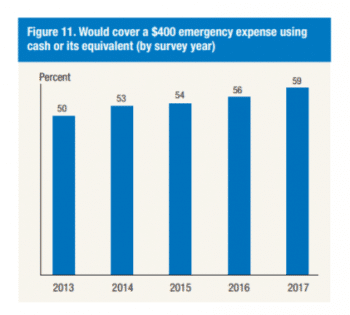 Strikingly, the Federal Reserve survey also found, as shown in the table below, that “(e)ven without an unexpected expense, 22 percent of adults expected to forgo payment on some of their bills in the month of the survey. Most frequently, this involves not paying, or making a partial payment on, a credit card bill.” 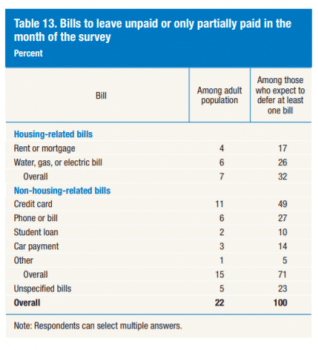 And, as illustrated in the figure below, twenty-seven percent of adult Americans skipped necessary medical care in 2017 because they were unable to afford its cost. The table that follows shows that “dental care was the most frequently skipped treatment, followed by visiting a doctor and taking prescription medicines.” 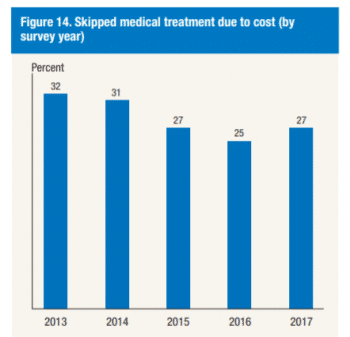 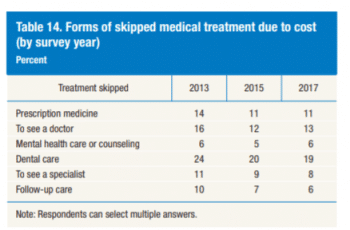 Clearly, we need more and better jobs and a stronger social safety net. Achieving those will require movement building. Needed first steps include helping those struggling see that their situation is not unique, a consequence of some individual failing, but rather is the result of the workings of a highly exploitative system that suffers from ever stronger stagnation tendencies. And this requires creating opportunities for people to share experiences and develop their will and capacity to fight for change. In this regard, there may be much to learn from the operation of the Councils of the Unemployed during the 1930s.

It also requires creating opportunities for struggle. Toward that end we need to help activists build connections between ongoing labor and community struggles, such as the ones that education and health care workers are making as they fight for improved conditions of employment and progressive tax measures to fund a needed expansion of public services. This is the time, before the next downturn, to lay the groundwork for a powerful movement for social transformation.